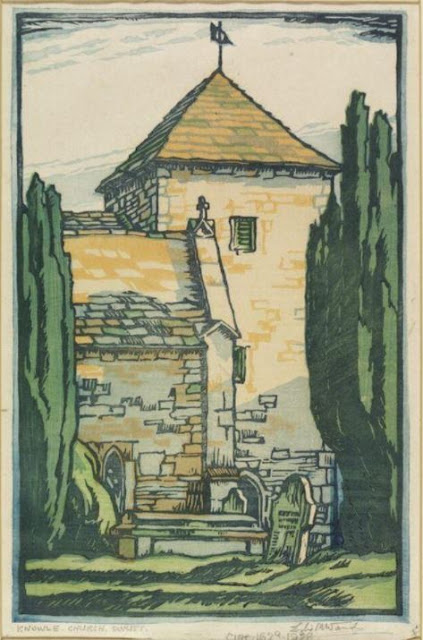 I was reminded of Leslie Moffat Ward's colour linocuts when a reader told me he had bought one. There are six that I know of and like all of Ward's work they vary in their appeal. This does not mean the best like Knowle Church, Dorset (above) are not worth having. Ward belonged to that small group of printmakers who were adept at both intalgio and relief print methods and was proficient when it came to etching, wood-engraving, lithography and lino. This was no mean feat but for all its bravura effects, his was a very settled art. He spent most of his life living in the Springbourne area of Bournemouth where he taught pictorial design at the college of art under its headmaster Thomas Todd Blaylock. Ward used to give me the impression that he was out on his own, intent on conveying a vision peculiar to himself like a Dorset Claughton Pellew. The fact he made colour linocut gives the lie to such an interpretation.. It does not carry the essential weight of tradition and had a modish triviality about it. 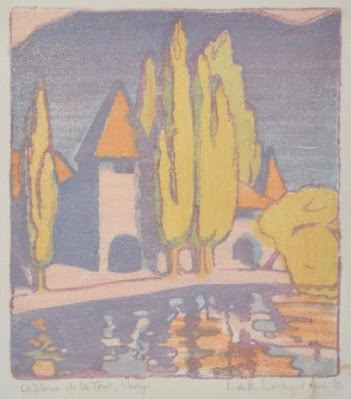 It goes without saying that Ward's linocuts are generic. None of them achieve the distinctive intensity of his etched work at its best. They were not pot-boilers, but they were a side-line, and collectors who belong to the exclusive cult of Isabel de B. Lockyer may have the feeling they have seen Knowle Church, Dorset somewhere before. And indeed they have. Knowle Church is De B. Lockyer's linocut Chateau de la Tour Vevey (1926) transposed to rural Dorset. Unfortunately for Ward the comparison with what what I take to be his source is telling. Lockyer had a chic nonchalance that was beyond him and her poster colours were applied with typical brilliance and originality. Her poplars are living flames; his Irish yews are worthy sentinels. What is good about the Ward, though, is the play of light from the right. This redeems the print as the subtle play of dark green and ochre does. 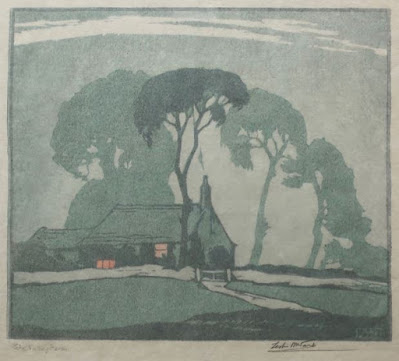 The Valley Farm (above) takes another alternative and adopts the manner of Robert Howey. Howey was another early exponent of colour linocut in Britain. With very limited means, Ward produced a subtle print that also reminds me of Hans and Leo Frank who exhibited here in the twenties. But the Ward has a firm sense of composition and drawing that marks out where his ability lies underneath the considerable surface attractiveness. Vineyard Farm (below) was made in two versions, one light brown, the other blue, and probably comes from later on when Ward was in full control of the medium. Some of the prints are cruder and depend heavily on compositional gambits that have very little to do with the linocut medium. 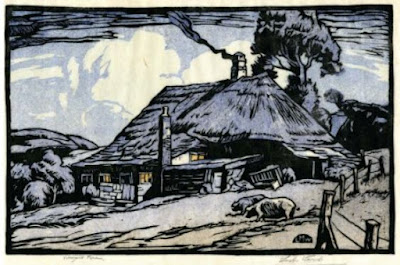 It is worth putting up one example (below) if only to show just how much Ward worked at his linocut technique. He was much better in this respect than his friend and associate, Eric Hesketh Hubbard, who was based in the New Forest. Vineyard Farm  shows how much a well-trained artist could achieve with lino. The farmhouse sits firmly on its hillside and is remote from the flat effects of Hesketh Hubbard's buildings. There is always something satisfying and intriguing about Ward and if you do spot the obvious loans from his fellow artists, you then need to to ask yourself how many ideas they took from him. 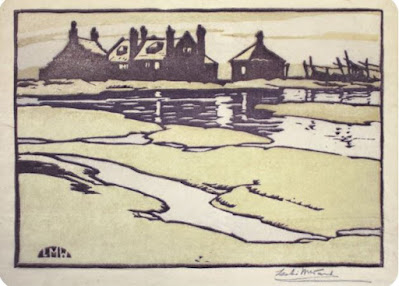