A colour woodcut of the Thames by Leslie Moffat Ward

If nothing else this fetching colour print by Leslie Moffat Ward  is further proof of what I said about him in the last post. The reader who sent it to me yesterday described it as a colour woodcut and that is what it looks like. This means that in addition to the list of  techniques I gave in the previous post we should add colour woodcut. Seeing the print also means I now have to go back on what I said only on Wednesday when I called the colour prints 'generic'. This enticing view of the river Thames conveys too much information about the Thames sailing barges and the riverside factories to be called generic although it does hover somewhere between illustration and fine art. You could never says that about about Ethel Kirkpatrick's view of the Isola San Giorgio at Venice (below). 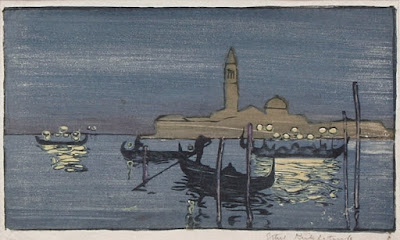 Readers familiar with Kirkpatrick will know her series of prints of the Thames that often include the distinctive Thames sailing barges riding low in the water exactly like the ones you see in Ward's print. Ward made many etchings of the Thames over his long career but also produced the image of lighters and barges passing below London Bridge in lino (below). But there is a considerable difference between the evocative night time print so typical of him at his best and the descriptiveness of the London Bridge scene. Like so many of the linocuts it is very short on mood and atmosphere, not something you could accuse the main image of.
As I also suggested on Wednesday it was trickier to see what effect Ward himself had but I would say Thomas Todd Blaylock's colour woodcut views of Poole Harbour owe a lot to Ward's example. They are not as accomplished as the Ward print and without more research it hard to know exactly what was happening in the southern counties of England. It was not a school as such but they had a folksy appeal that was not found amongst the metropolitan artists associated with the Graver Printers. 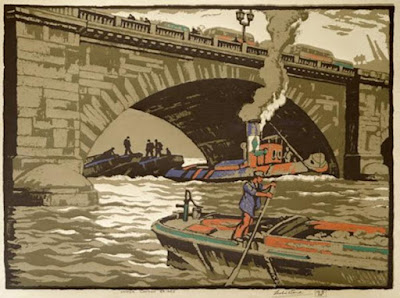 If you have not identified another guest at the dinner, I would suggest one of them is Yoshijiro Urushibara. In my own view British colour woodcut took another course following the publication of Brangwyn and Urushibara's Bruges portfolio in 1919. As William Giles put it about Urushibara 'to all of us he has been of service'. From students at Birmingham to sophisticated decorative artists in Paris, Urushibara did the rounds and helped everyone to achieve subtle new effects and Ward's print is so different form his linocuts, I would find it hard to believe Urushibara wasn't stowed away somewhere.