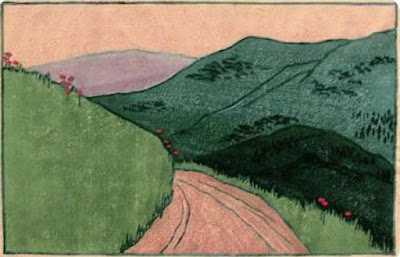 Never a good idea, but I had always believed for no special reason that Frank Morley Fletcher's Woodblock printing  published in Britain in 1916 was the first manual on the subject in English. I was wrong. A far less well-known American colour woodcut artist got there first. This was Elizabeth Colwell whose own book On the making of  woodblock colour prints came out in the United States in 1910. I have to say here that I don't think Colwell is in the first rank of America colour woodcutters not because she didn't have talent but she failed to throw off the method of making colour woodcuts she had learned from others. 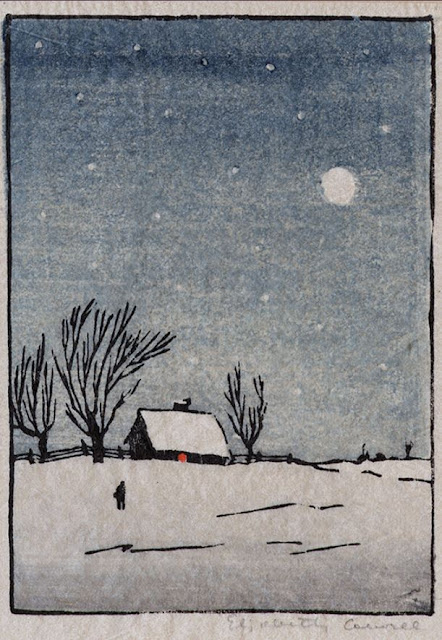 Colwell was born in Bronson, Michigan, in 1881, and trained at the school of the Art Institute of Chicago where she met the colour woodcut artist, B. J. O. Nordfeldt. He has a studio in the city's South Side district and it appears it was there was was introduced to a way of making colour woodcuts based on the Japanese method. What is unusual about all this is that Nordfeldt had worked for a friend of Fletcher's called Albert Herter who ran a family design business and after Nordfeldt had been to Paris to work on the firm's exhibit at the Paris Exposition in he went to Reading to take the class in colour woodcut that Fletcher was running at the Extension College there. What has to be said is that none of the were all that experienced as printmakers. Fletcher had made up the method as he went along  a few years previously and then tried to make everyone else keep to it. Ironically, in Reading Nordfeldt made friends with William Giles who at twenty-seven refused to take Fletcher's prescriptive approach on board and eventually went off to Sweden where Nordfeldt's family came from. 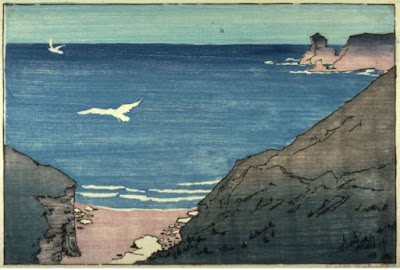 As for Colwell herself a biographical note published by the Art Institute says she also trained abroad and the only evidence of where she went is the print above, Cornwall coast, England, now in the Museum of Fin Arts at San Francisco. Friendships and connections between American and British artists between about 1897 and the first war are poorly understood but they did exist and they were a way that artists often learned how to make prints. Norma Bassett Hall's visit to Edinburgh in the twenties is well-documented but we have far less to go on with Nordfeldt, Colwell, Arthur Wesley Dow and Edna Boies Hopkins who almost certainly came to Britain too. Colwell's technique in the Cornwall print are in some ways exemplary. All the main elements are there - the depth of colour, the brushwork, the keyblock - but behind it all is the ghost of yet one more American artist and it is James MacNeill Whistler. The importance of tone and the arrangement of the image is more Whistler than Hiroshige. I was only looking at the strange blues in Whistler's Symphony in white number III on Friday in Birmingham and here they are again! You will also notice the Japanese fan the girl has let slip. (The other woman is Joanna Hiffernan who was Irish and lived with Whistler in London in the 1860s. Her father referred to the artist as 'mi son-in-law'.) 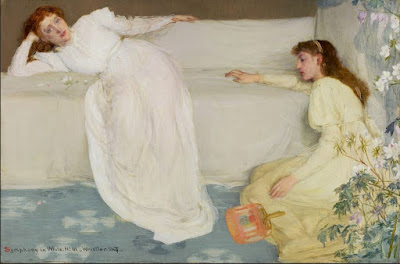 The difficulty is that all these early colour woodcuts can tend to look generic. You ask yourself whether it is Cornwall or Eagle Bay or Provincetown. Because what matters most is the mood. I constantly mix up the work of Colwell, Nordfeldt and sometimes Sidney Lee who also trained with Fletcher and worked at St. Ives. What holds them all together (and restricted them) was the method Fletcher insisted on teaching. His excuse was that colour woodcut method was good training for them. The unfortunate result were prints that were constricted by the keyblock, the artful application of ink and general lack of vigour. The artifice exemplified by Whistler's languorous young women lounging about in his Charlotte St. studio had become a burden by 1910 when Cowell was at her most prolific. Fitzrovia is not Chicago's South Side and that is that! 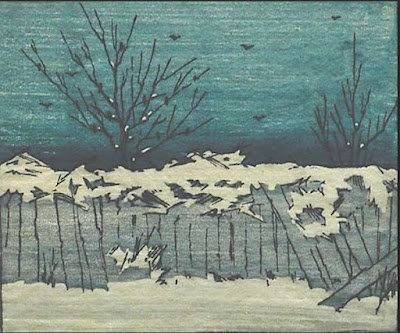 By now you may see my drift. They all of them (given half the chance) wandered from one art colony to another. It didn't matter whether it was the area around Fitzroy St. off Tottenham Court Road in London or St. Ives or the quartier latin, they met the same people and more importantly the same ideas. And the same assumptions too. 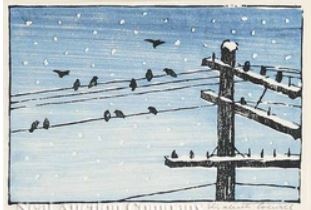