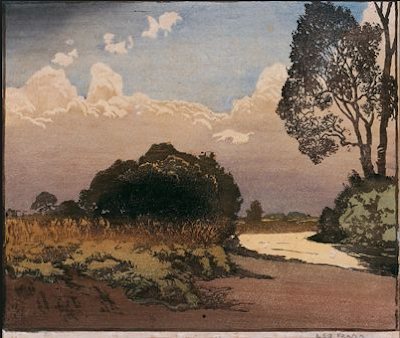 When all around them, everyone had gone woodcut-crazy, from Emil Orlik with his raw Ruthenian peasants to Carl Thiemann and his dandified cockeral and on to LH Jungnickel and a zoo-full of hyperactive maccaws, Leo Frank went down the road of refined and understated landscape. Now, this should suit a British collector such as myself, and I admit I would like to own the first woodcut you see here (in fact, another version, in awful condition, as you can see below, came up recently on British ebay), but at the end of the day, with quite alot of his prints, I just think there's something missing, and it's not just a keyblock. 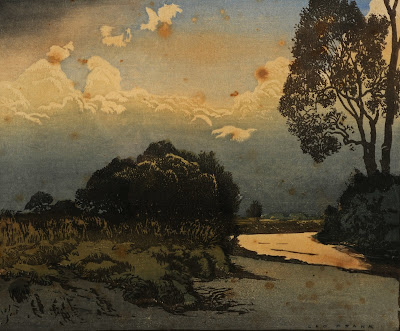 I think one thing that appeals is the woodcut feel it has. As so often with British colour woodcuts, you can see the way the medium has been applied in the foreground, and there is a tactful use of the keyblock, and a subtle massing of colour that wouldn't be out of place in an English watercolour. I was surprised to see Herbstnachmittag, below, was dated as early as 1908. It was the year of the great Kunstschau in Vienna, when Jungnickel had only just begun to exhibit woodcuts. But Jungnickel wasn't Viennese. He wasn't even Austrian by birth. Nor were Orlik, Thiemann or Klemm. Frank, though, was a local. What we have in the woodcuts is somewhere. And if isn't Austria, then it's Italy. And when not there, we move on to Egypt. But one place we never visit is Japan. Too modish by far. 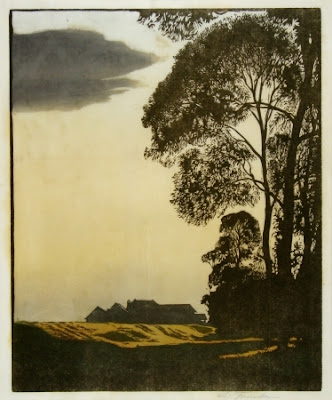 Along with his twin brother, Hans, he studied first at the Kunstgewerbeschule, or School of Applied Arts, before moving on to the Academy of Fine Art where they presumably studied painting, pure and simple. It was the standard thing to do, if you proved you had the talent. (Even Egon Schiele took that course to fine art martyrdom). Leo's woodcuts owe less to the emphatic rather abstract style of the Secession than his brother's do. He's also less varied in his approach. He takes a course that blends various styles and trends to come up with work that is sensitive to the effects of light and yet decorative, as other people eventually did, many of them, as it happens, in Britain. 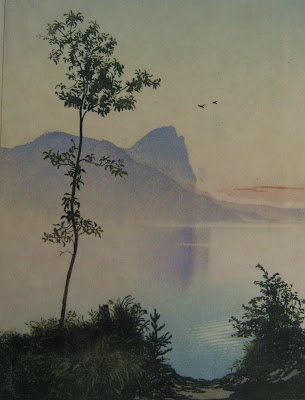 How far either of the brothers had an effect on British printmaking is hard to say. Hans exhibited six prints with his British colleagues in 1913, and both brothers exhibited  their work in Britian throughout the twenties and thirties. (They were so respected, their work was on show in Birmingham after the outbreak of the second war). It was also available from print-dealers here soon after the first war. The elegant trees that come up time again in Leo Frank, became a standy-by for many British printmakers from the twenties onwards. 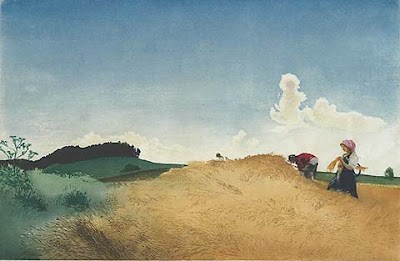 You can see how easy it would be to switch alot of this to Sussex or the Isle of Wight. Frank had an interchangeable manner. He re-uses elements - the soft skies, the floating birds, the floating trees - to bring off his aerial enchantment. He suggests, it isn't too exact, nor too demanding. It might have offered a way out. In England we were cowed by French art, above all by the drawing of Ingres. But Frank wasn't Royal College or the Slade, and that's for sure. 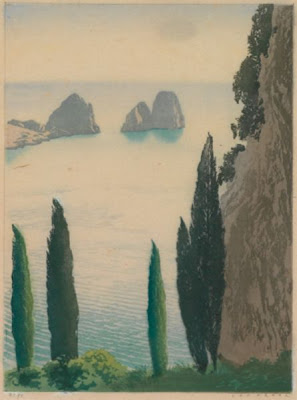 But you could also convert Berkshire to Capri. If  Frank didn't know William Giles' September Moon (see the post) before he made this last delicate print, I'd be surprised. It was a two-way thing, I suspect, for many of them. Both brothers' prints often look like aquatints, and the way Leo abandonned the keyblock so early on in his career could well be a lesson he had learned from Giles who was articulate enough not too need one.

Robert Gibbings: the Fenian and the Orangeman 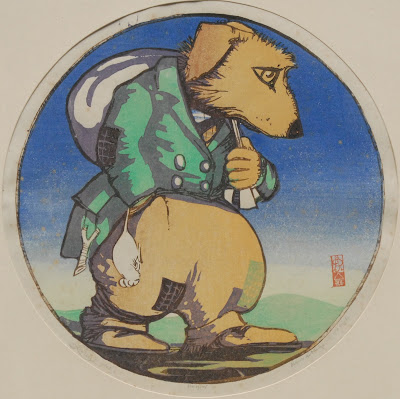 The allusion to his Irish background in this colour woodcut by Robert Gibbings is both troublesome and fascinating. Is this also the errant medical student who left the bogs of Munster with only enough money for one term, was it, at the Slade? It's just as good to see it together with its companion piece called Play, which was bought by the V&A in 1922, the year the Irish Civil War broke out. 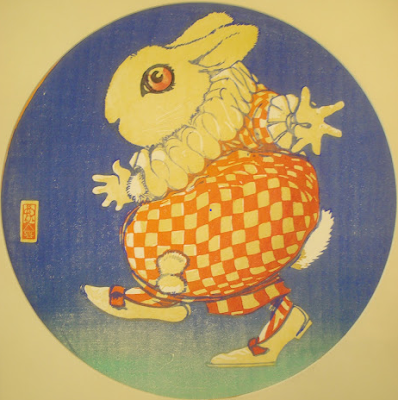 The top print comes up for a auction at a three-day sale at Bamford's of Derby beginning Wednesday 13th March. It's a quite wonderful piece and I wonder which of the national collections will be bidding.
Posted by Haji baba at 21:28 6 comments:

From the shadows: the prints of Sydney Lee at the Royal Academy 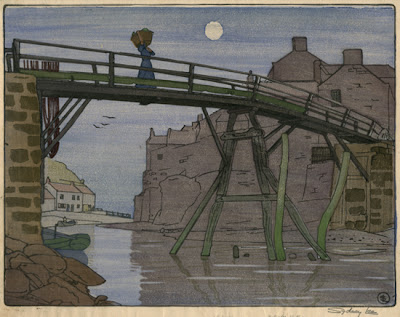 My own view of the prints of Sidney Lee may well be equivocal, but there is no getting round the comments left in the visitors book during the opening days of this new exhibition at the Royal Academy in London. 'Inspiring' certainly suggested that a number of people there made prints themselves. 'A revelation' would have been less of a revelation if such comments had not been so prevelant about many printmakers featured on the pages of this blog. And there was no gainsaying the blunt appeal of  'More prints like this'. It is a long time since any public gallery in London has shown prints from this period and the academy may look a mite out-of-touch and self-regarding when it comes to choice of artist. Lee, after all, was one of their own members. But to some extent it seems the road was chosen by a small group of dedicated Lee followers. There are other contemporaries of Lee who I would consider more deserving of a show in Piccadilly before him, Ethel Kirkpatrick and William Giles amongst them, but the die is cast. Sydney Lee it is. 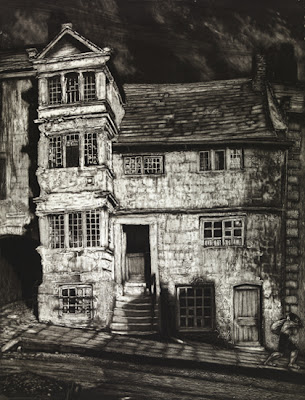 I have to say the show looks good. The size of the rooms suits the large scale of Lee's prints and the gilded architecture brings out an old masterly touch to Lee I hadn't noticed before. Being a pedant, I could have done with another glass-fronted case, and it was frustrating to read about Lee's watercolour sketches he used to make his colour prints and not to see any. But it is apparent now that alot of Lee material has simply not survived, and it is a credit to all those involved, Robert Meyrick and Harry Heuser above all, that the show has taken place at all. 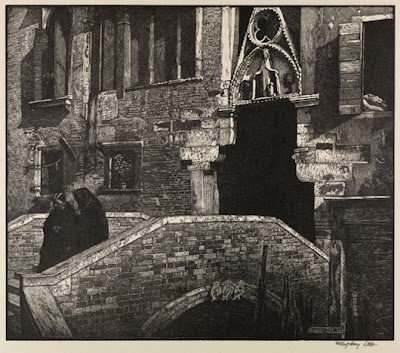 Malcolm Salaman came up with one of his phrases when he talked about 'the verity of textures' in Lee's prints. Certainly, the range of his printmaking is impressive. Etching and aquatint, woodcut and wood-engraving, and mezzotint, all worked to a point where the prints begin at times to look like photographs. But Lee, it has to be said, is transitional. Some of the work hovers between the reproductive finesse of C19th engravers and the decorative flair and expressiveness of C20th work. The effect may be mysterious, but the marks Lee actually makes lack interest. What  Samuel Palmer did with pen and ink or Claughton Pellew achieved with his tools, was as individual as it is entrancing, so it certainly isn't a matter of fashion or changing styles. 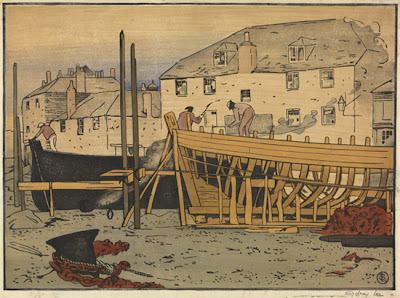 Lee started out at Manchester School of Art learning sculpture and relief modelling. Unsurprisingly, the stones and buildings he choses as subjects are often sculptural, he harries his prints the way a sculptor might, the light and shadow shifts and glimmers the way it does on a Rodin bronze. At times I found myself wondering whether Lee could actually draw or not, but you only need to take a close-up look at the head of the woman crossing the Ponte Paradiso to undertsnad how much Lee's imagination worked in three dimensions. All the same, the flatness of some of the work is disconcerting. 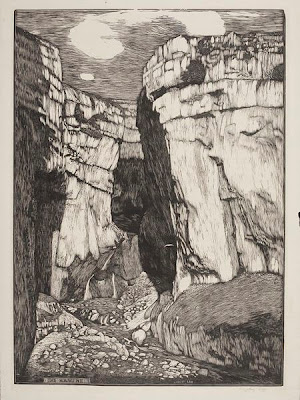 Ironically, this is especially true for some of the colour woodcuts, not so much Boatbuilding, St Ives as in Drying sails, St Ives.  There is as much interest in structure as there is in surface, and in Boatbuilding he begins to make marks that have a touch of individuality about them. Unfortunately, I strongly suspect he may have learned this from the lithographs of Henri Riviere. What the early history of Lee's prints is, though, is hard to say. Nothing is dated and everything tends towards the circumstantial. It won't matter very much to people if the odd date is wrong. I would have also thought Lee was making colour woodcut prior to the first date given, which is 1904, but again my own take on Lee is just as circumstantial.


But, all told, this is a fascinating and enjoyable show. The colour woodcuts in particular come up really well. But what comes up most, for all his travels to glorious Italy and sunny Spain, is Lee's northern Englishness, as dour as it is evocative, and he is clearly well inside the main interests of the British printmaking tradition if one considers John Sell Cotman or Valerie Thornton or Norman Ackroyd even. He needs more context. I am dubious about the claim that he was 'experimental'. Original artists prints, especially in colour, were relatively new when Lee began. They were all of them finding their way and, as I've said before, when I talked about the 1910 show in Paris, all of those artists, British and French, were trying out different ways of working. Lee was only one of them. He presented himself in the summer of 1897 as the nineties aesthete. It was an experiment in living that was not to last that long. 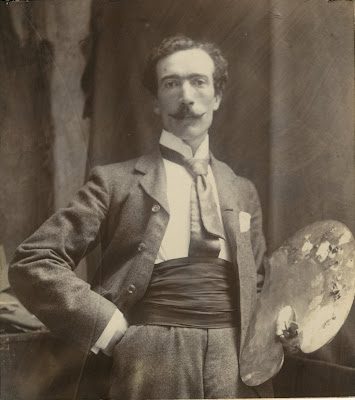