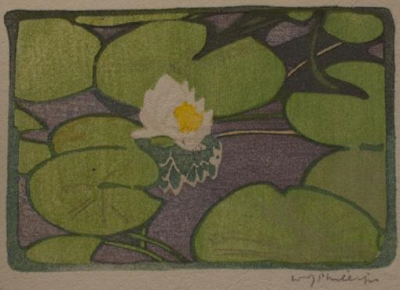 Walter Phillips was one of those in between artists who it takes some while to discover the kind of art that suits them. He has been claimed by the Canadians as one of their own, reasonably enough because he produced the work he is known for while in Canada (and the National Gallery were buying his woodcuts within only a few years of them being made). But I am not sure Canada does him much justice by this claim. His father came from a Welsh nonconformist background and in common with all Methodist ministers he went from place to place as a preacher in the manner of John Wesley (and as Christ had done before John Wesley) so the artist had a portable childhood and I am sorry to have to tell the National Gallery of Canada this but Phillips, in common with so many other artists, came from nowhere and what you see here are his pictures of nowhere. 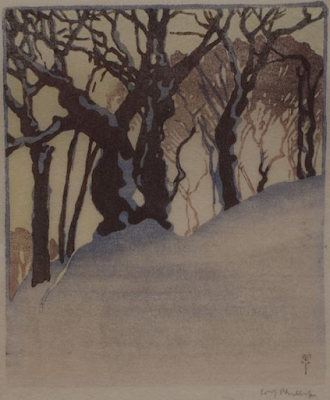 He did receive some art training on the way and, once he finally settled for a time at school in Worcestershire, he was sent for a number of afternoons a week to Birmingham School of Art. Five years in South Africa followed, not the obvious place to go as a would-be artist, and when he returned to Britain without having made enough money to go on with his training at one of the ateliers in Paris, he settled down to life as a teacher of art in Salisbury and then got married. Canada came next but only for a while. After ten years in the country, he was back with his wife and children in England and, according to Phillips, it was only because the children missed Canada that the Phillips went back to Winnipeg. For Winnipeg it was he came from.

But in between something had happened. Phillips had gone through a process of self-creation of a kind that isn't uncommon. What is more unusual is the way Phillips provided us with the documents describing what happened although what he said has to be handled with caution and, in the end, the true facts about those troublesome years of self-discovery in Canada are hard to make out because the more concise Phillips is about his predicament, the more confusing it becomes. Just like Canada, Phillips makes claims that always leaves me feeling dubious. 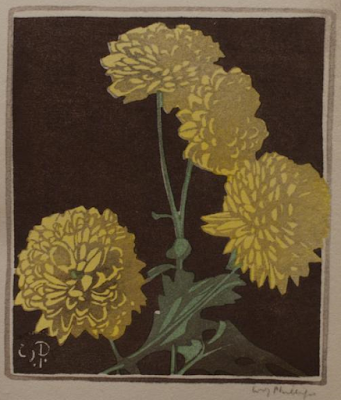 He presented himself as a woodcut pioneer and I suppose in some ways what he said was true. There wasn't much in the way of woodcut in Canada at the time but claiming he had never seen any work by any of the Japanese landscape masters when he began to make woodcuts, takes some believing. He disliked etching, we know that; his fastidiousness comes across loud and clear when he describes the smell and mess of the process but how he stumbled on woodblock is impossible to make out. Again he claimed that he remembered a helpful article written by Allen Seaby but unfortunately that particular article came out three years after he began his own exploration of woodcut and it would have been very little use when it came to making woodcuts properly. He talked about trying different kinds of paper and emphasised his resourcefulness by saying he once tried printing on lavatory paper before he tried a piece of old hosho paper he had lying around. Yet how did that paper get there? 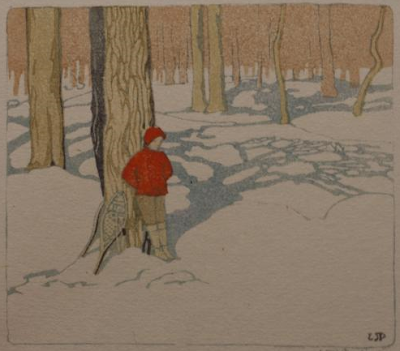 But what he made was different and unlike any of the colour prints being made in England around about 1916. He is most like Seaby (and Seaby admired what Phillips was doing) but Seaby kept to subject and in the end he is much more like the rather abstract German artist Paul Leschhorn or the designer-artists of Vienna. What Phillips did discover for himself was a sense of space in Canada. Ironically, his winter woodcuts are very small and as soon as I saw one for the first time in front of me, (it was The lily, the one at the top of the post), that was what I liked. Phillips wasn't trying quite so hard and it came across as natural - notes, in fact, from a small island. 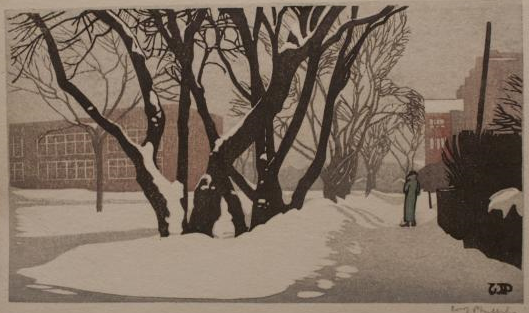 Winter woodcuts came out as a portfolio of prints in 1936. He had already produced three other portfolios. It was one way of recycling work. Snow bank (second from the top) had been sent out as a Christmas card in 1923, with Phillips making a note that an edition of 100 had been made, while The lily was sent out as a Christmas card in 1925 (and Seaby received one). Like William Giles, Phillips could be quite free and easy with his editions. At least one of Giles prints came out in three different editions but then both Phillips and Giles could sell them. They were also friends, hardly surprising. Not only that, it was Giles who provided the connection with the old country and, paradoxically, who introduced him to the refined practice of Japan. 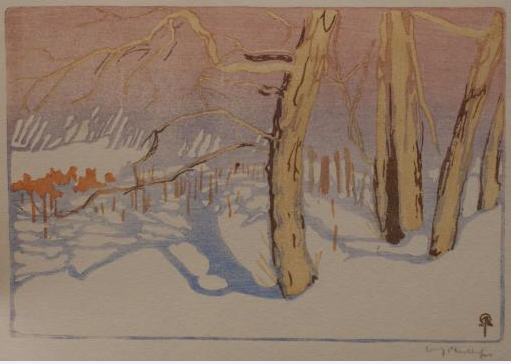 But then Phillips' memory played all kinds of tricks with time. He was aware of his isolation. Back in Canada, he recalled the time he had spent in London, how informed and cosmopolitan it was compared with Winnipeg. There was Salaman's flat with the heaps and heaps of prints, the atmospheric studios of Chelsea that were dedicated to art. But you only have to look at the small prints here to see how he manoeuvres and the way space and perspective are malleable. In the end, Phillips wasn't very bothered about facts What is so wintry about Pom-pom dahlias you might ask? It is the irregularity that is so appealing. The blocks he used are never square; there is give-and-take about these images. The lily is there because it was sent out at Christmas. Winter woodcuts is no more about a season than the prints are about a place.

I should have added that these images are from the Loch Gallery, Winnipeg, and my thanks are due to them. They had the complete portfolio for sale but it is now sold.
Posted by Haji baba at 06:35 7 comments: 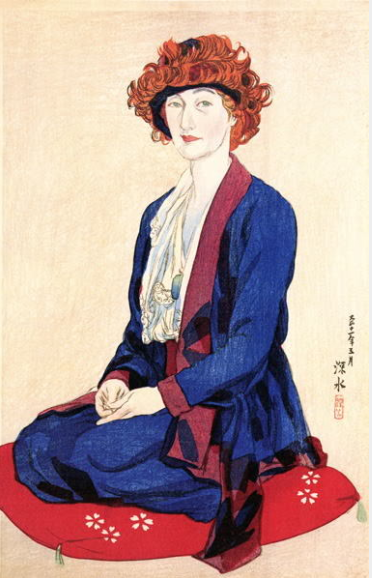 One day in 1923 the Canadian artist, Walter Phillips, was taken to Notting Hill Gate in London to meet the critic and writer, Malcolm Salaman. There was something provincial and naïve about Phillips' reaction to Salaman's flat, heaped as it was with prints of all kinds from old master to whatever peccadillos or whim had appeal in the market for etchings. For instance, there was Arthur Briscoe's manly array of rigging and seafarers and Elyse Lord's foppish, oriental confections. And there Miss Elizabeth Keith. And what did they think about her? Because, as with Phillips, there was something naïve in her own make-up. Phillips' work looked fine until it came up against real printmaking talent like Ian Cheyne and then, I'm afraid, it was sent packing. In a similar way, Keith's Tokyo publisher, Shozaburo Wantanabe, was possibly tempting fate when he arranged to have an artist as talented as Shinsui Ito prepare a design with Keith as its subject simply because Keith's weaknesses would be made all too obvious. 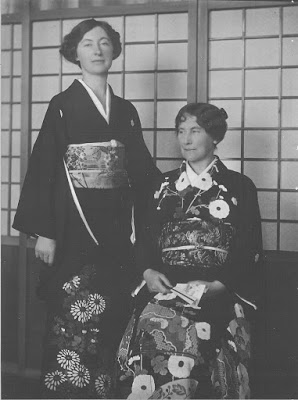 To start with,  Keith would have been incapable of the bold candour of Shinsui's blues, pinks and marmalade orange. Nor could she have achieved the subtle simplicity of the hands, the uprightness of the back nor, most importantly, the scepticism of that steady gaze of hers. But here were two artists bartering gaze for gaze and while it is obvious that Keith was in no way intimidated, Shinsui rose to his subject as Keith could not. Only look at the brilliance of that swirl of marmalade feathers around her head, that frivolous crown of glory. Who chose the hat? Shinsui, Keith or even her zealous publisher? It sets off the pale north European skin so perfectly. Nothing remains of the young Japanese beauties that were Shinsui's stock-in-trade. Instead we have a perceptiveness so acute it verges on satire. The outlandishness of the hat, the tumbled folds of her blouse, the intrepid eyebrows, that crooked mouth, they all invites us, by way of minute exaggeration, to take pleasure in this rather extraordinary European with her tomboyish, adventurous ways. Look at her in front of that sumptuous car sharing a garland with her friend and fellow-Scot, Kate Bartlett. What amuses us is what amused Shinsui. 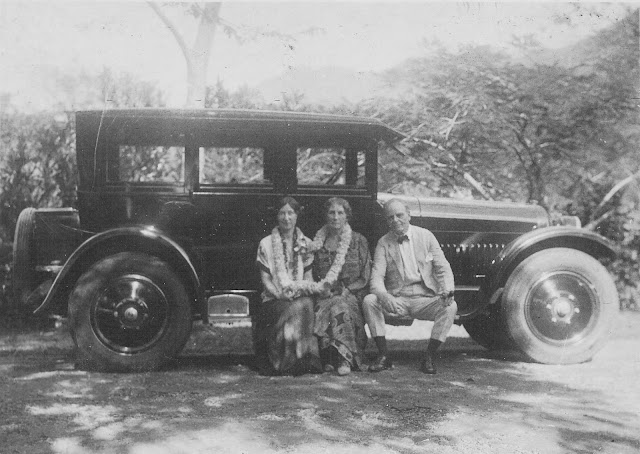 I need to credit and thank Darrel Karl at Eastern Impressions for the photograph of Keith and Kate and Charles Bartlett. 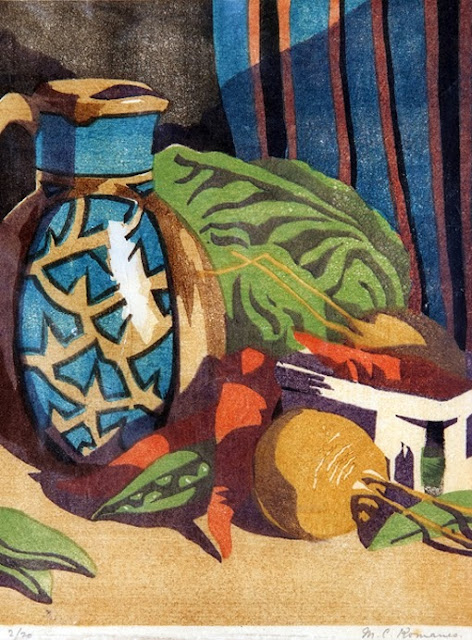 Yes, I know. The Scottish artist, Margaret Romanes, with her bird and flower woodcuts that somehow seem to miss the point, is probably the last person you would associate with the methods of Sigmund Freud. But there it is and, I have to say, Still life with blue jug is worth a second look. For someone who had no training, she had the essential understanding of form necessary to make a print without a keyblock. It all ends up looking like a linocut (and nothing wrong with that) and she clearly felt she had to make the colours bright enough to distinguish between her various shapes. But at least it is wall-to-wall colour unlike so many of her better-known prints. And I am not going to go on about those. 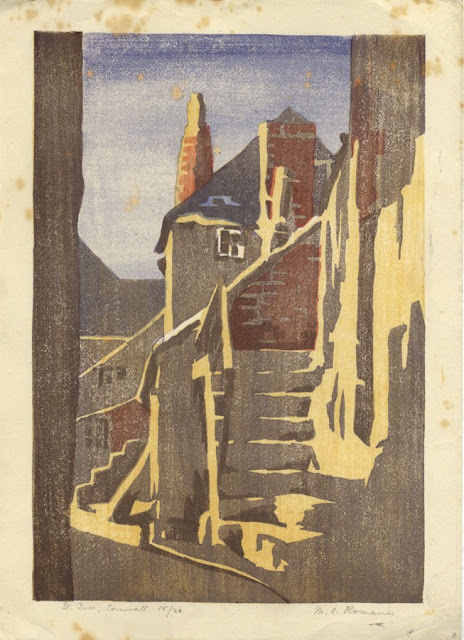 What is interesting is that she could perform in cream and grey just as well. She was encouraged to paint by Stanley Cursitor. He had started out as a young man down from Orkney in the lithographic printing business before going on to train in fine art at Edinburgh College of Art during the fairly short period before the first war when Mabel Royds was teaching at the department. In common with Scottish contemporaries like Anna Findlay and Francis Blair, Romanes also made her way down to St. Ives in Cornwall. I think 'only select' was the watchword she used when she made St. Ives, Cornwall. It owes a good deal to Cursitor's post-war studies in monochrome but she was wise enough to learn from him and, in fact, she describes the huddle of sunlit buildings just as well as the still life objects but uses far fewer colours. The source of light is evident, the shadows intriguing. All of which goes to show that not all depth psychology has to be sinister. 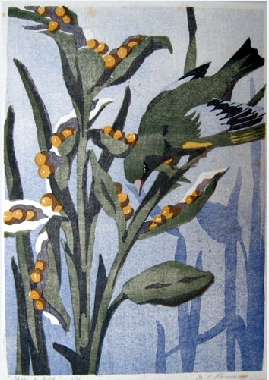 None of these prints are dated so it is hard to make very much sense of her career  but in the late twenties, Dr. Winifred Rushforth arrived back in Edinburgh fresh from the Tavistock Clinic where she had been undergoing psychoanalytic training. I'm not sure what the exact time sequence was but her husband took the job of registrar at the College of Art after his business in India failed. Romanes then began her training under Rushforth and funded the setting up of the Davidson Clinic where Rushforth could work supporting mothers and children as she had done in India. It struck me as extraordinary at first that an artist who had made prints with not the least hint of surrealism or psychological depth would become a psychotherapist. But that was what she did. All of which really should remind us how little we know about these artist and their lives.


Some of the prints are for sale at Sulis Fine Art but, as you can see from the Cornish woodcut, the condition is less than perfect. They turned up in a job lot at auction in Edinburgh so her work is still floating about somewhere.