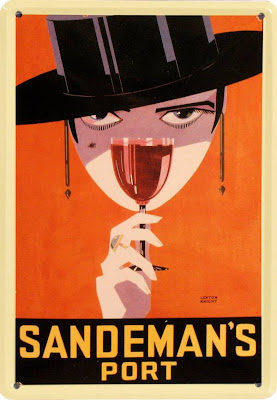 Yet another British printmaker who is absent from the annals, probably largely due to scarcity. He was encouraged to take an interest in art by Samuel Clegg, his headmaster at Long Eaton Grammar School. Clegg went on to teach him how to make colour woodcuts and he was skilled enough to produce this ad for Sandeman's while still a student at Nottingham Art College. 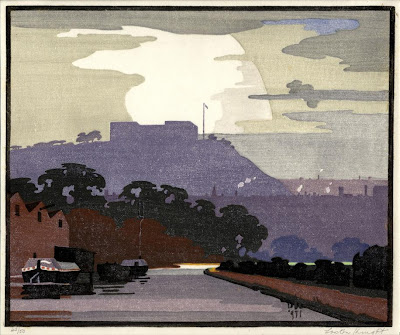 He went on to make a series of colour woodcuts in the 1920s using a spare, stylish manner that belies his considerable skill. As you see from this bold view of the Nottingham Canal with the castle beyond, he had most in common with the poster artist Frank Newbould. Whether Newbould would have bothered obtaining those rich foreground blacks and layers of mauve is another matter. (JMW Turner, with licence, painted the same view). 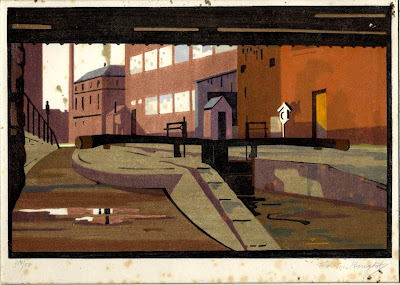 In fact this view of the lock gates farther along the canal (yes, I know these views extremely well) does show him to be a subtle colourist. It's not just about impact; the shifting angles and levels are well-thought out, the warm ginger against the black of the road bridge a combination worthy of Fez or Rabat. He's a nice observer, too. That walkway remains damp to this day. He shifts very little around; it is all entirely recognisable. 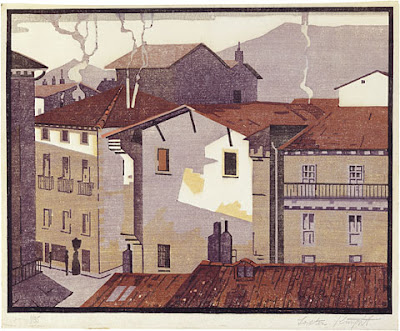 And he continues the urban theme in this cool analysis of Zarauz in the Basque Country. I suspect there is a move away from the easier effects of the first print and the final woodcut has him binding and plaiting the luminous Souths Downs fields with all the verve and none of the daftness of the Grosvenor School. 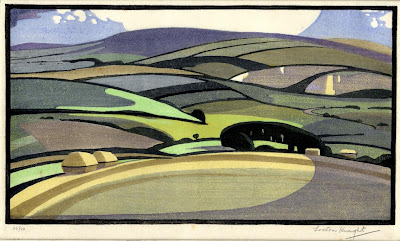 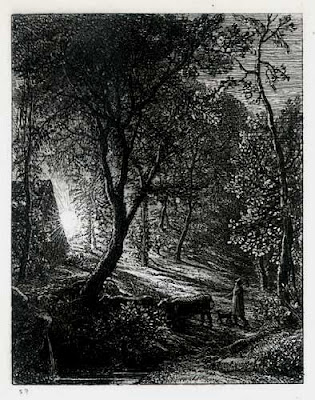 A purchase on Charing Cross Road, London, in November, 1924 led to some of the most lyrical British prints ever made. The man doing the buying was William Larkins, a 23 year old student at Goldsmiths College in New Cross, the purchase Samuel Palmer's etching 'The Herdsman's Cottage' of 1850. 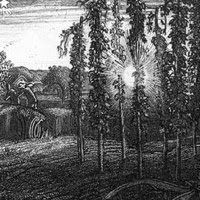 This he showed to his fellow etching students at Goldsmiths. There followed a rash of cottages and brilliance that lasted with some of them till 1933. Graham Sutherland produced this etching called 'Crayfields' the following year and later described the day they saw the Palmer as a turning point for them all. Edward Bouverie Hoyton's etching 'Great Seaside Farm' belongs to 1925. 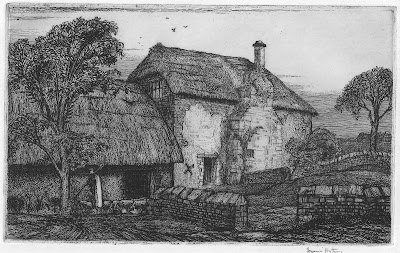 What had impressed them were Palmer's deeply bitten lines, intensely worked surface and luminosity. Palmer was nothing if not a craftsman, always with quite original technique.
Paul Drury who made his etching 'September' in 1928 was no less painstaking than Palmer himself.

Last but not least is Sutherland's sublime 'Pecken Wood' also of 1928. Of all of them he had learned how to handle the variation of light from Palmer. By the time these later etchings had been made, the famous Palmer exhibition of 1926 had been held at the V&A. The effect on Sutherland is clear, a wonderful synthesis of Palmer's early pen and sepia imagery and later etchings. 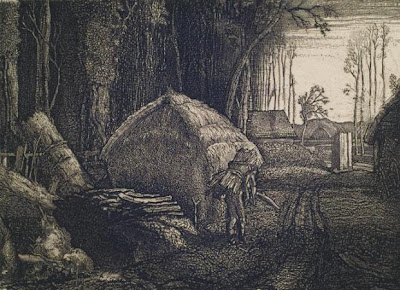 Ironically it was Larkins, the boy from Bow, who was perhaps least affected.
Posted by Haji baba at 17:14 No comments:

Nothing very extraordinary about going off to San Remo but if you made it to Chefchaouen in Morocco during the 1920s you were nothing if not intrepid. FG Wilkinson was one of the British printmaker-travellers of the time, in company with Mabel Royds, Isabel de B Lockyer and Louise Collier (who got as far as Tangier). I know nothing else about him apart from that.

His linocuts were alot less adventurous. The ravine at San Remo is impressionistic in a Frank Brangwyn way, the views of Chauoen a touch wish-you-here. The saturated blue stylishness the town used to have is missing.

At least the white robes and turbans are authentic. A shame in many ways he wasn't a better observer. The prints are basically OK if old-fashioned in the way they rely on Western perspective for their impact. No hint here of the scale and subtlety of northern Moroccan architecture.
Posted by Haji baba at 20:39 No comments: 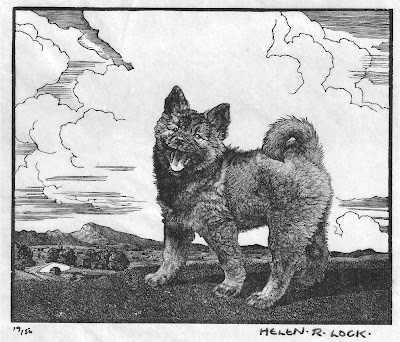 A British artist who may have lived in Sussex is the sum total of what I know about Helen Lock. But this wood-engraving on its own is enough to show just how meticulous she was. None of the try-too-hard, art school stylisation for Lock. She took a cute subject and approached it with discipline and skill. There is a wonderful play-off here between the dog in the foreground and the miniature landscape behind and a subtle relationship between print and photography. She was friend and archivist for Mrs Wingfield Digby, a Sussex breeder in the twenties and no doubt this prompted her choice of subject. She did make several other prints of the dogs. If anyone can turn up a copy of Betty Clark's 1979 book about C2oth British women wood-engravers, there are others inside. (The title is too cringe-making to repeat). Unfortunately, I was unable to include a 1920s photograph of champion keeshonds.
Posted by Haji baba at 19:07 2 comments: 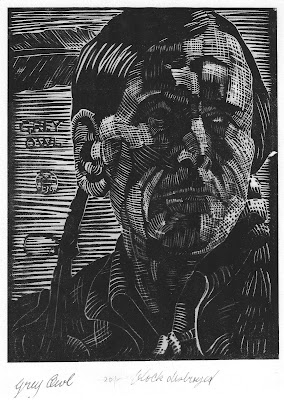 First up is the British artist, Mary Fairclough. Born in Bristol in 1913, her career began only a few years before the outbreak of war with a striking concentration on the human face and figure. Peasant women, Roma, native north Americans, a character from Gilbert & Sullivan are all in the youthful mix.

Here she takes on Howard Coster who took the photograph of Grey Owl during his speaking tour of Britain in 1935. Cropping Coster's image, she moves the head into the top right hand corner, turning his gaze away from the viewer and turning Grey Owl into something more like a Nigerian sculpture, both expressionist and backwoods with nothing stagey about it, unless we detect the heroic pose of a matinee idol. There certainly is the sense of the big screen. 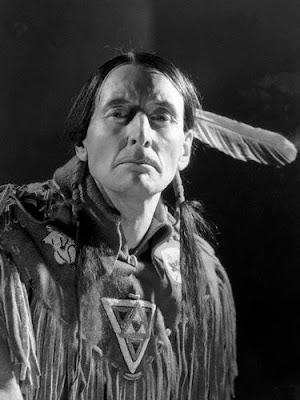 It could almost be an American print of the thirties. Ironically, she had made him look more real than he was. It eventually turned out that Grey Owl had been brought up in Hastings. There is a similar sense of drama in the classic colour linocut called 'Glamorous Night'. A woman is left alone whilst others whirl behind her like truncated DH Lawrence dervishes. She gazes down sadly as a bearded man approaches. Perhaps he is a revolutionary leader. This is a peasantry that has broken out into the jazz age. 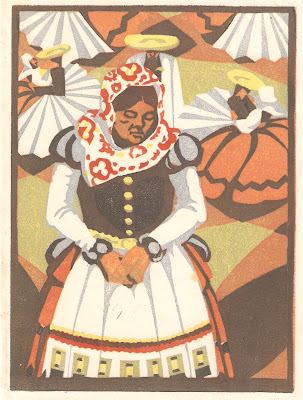 Not content with making linocut look like wood engraving, she also masters colour woodcut for a drole image of Poobah from Gilbert and Sullivan's 'The Mikado', a tour de force of folds. She creates another subtly fractured image, astutely avoiding a pastiche of Japanese art by choosing a theatrical subject. The topknot and the irises are equally inspired. 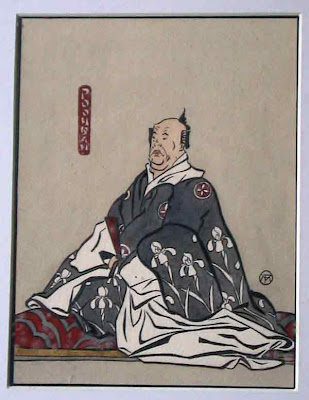