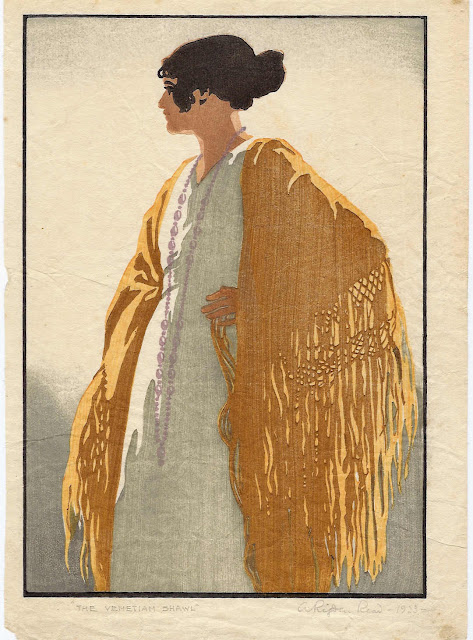 About 1920, Kathleen Rigden Read moved from Twickenham in London to a house called in North St, Winchelsea, in East Sussex. Once there, she set her the hand-looms her husband Arthur had designed and made and began spinning and weaving wool from the sheep grazed on Romney Marsh (below) as well as weaving and dyeing silk from thread she bought in for the purpose. (The photo shows Chris Finn Kelcey and his dog Pete with a flock of Romneys behind them and a flock of Suffolks in the other pasture.) 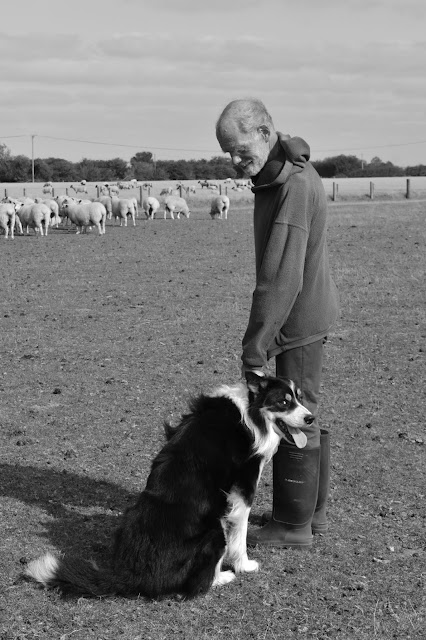 I believe she can be seen wearing garments made from both types of material in The Venetian shawl, one of the first colour woodcuts made by her husband Arthur in 1923. Kathleen was a member of Romney Marsh Weavers, a co-operative with a weaving shed in a disused chapel on Peasmarsh Road where they used wool from sheep at Oxenbridge Farm at Iden. Oxenbridge was owned by Catherine Buchanan (below) a friend and fellow member of the Weavers, and her husband Bertram, who was a retired professional soldier and an artist. 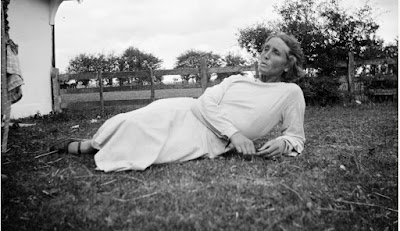 The members of the co-operative did all the work themselves from shearing to spinning and dyeing, often using vegetable dyes, including a beautiful fawn made from lichen gathered at Dungeness on the southern edge of the marsh. One reason I think the dress Kathleen is wearing is made from wool is because a tanned Catherine Buchanan can be seen wearing it in a photograph taken at Oxenbridge by Paul Nash.

At the time Nash and his wife Margaret were renting the tied cottage across the road from the farm after they had moved from Dymchurch and where Nash did some of his very best work before surrealism got the better of him. It was an odd mix of the old Arts and Crafts dispensation and modernists like Nash but it seemed to work even if the fastidious Nash was dismayed by his wife's enthusiasm for the folk-dancing that went off at the farm. Whether Margaret ever owned any of the garments made by Kathleen is another thing. Kitty has a rug-loom at the farmhouse where the floors were covered in her rugs. 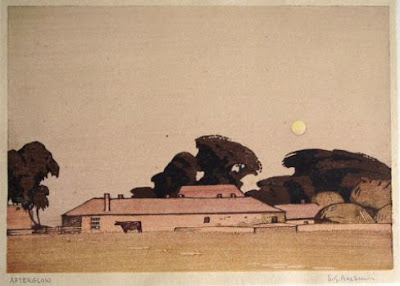 Other visitors to Winchelsea were S.G. Boxsius and his wife Daisy. Possibly one of the lambing-sheds that are such an important feature of the marsh can be seen in his linocut Afterglow (above) (and once you know the marsh, it couldn't be anywhere else) though many of the current sheds are made from corrugated iron and steel. It is hard t know what happened to any of the products made by the co-operative. They were sold at local exhibitions and praised at larger exhibitions in London. Kathleen silks were sold alongside Arthur's colour woodcuts and some of them certainly were bought by the Carnegie Foundation in the U.S. about 1927. 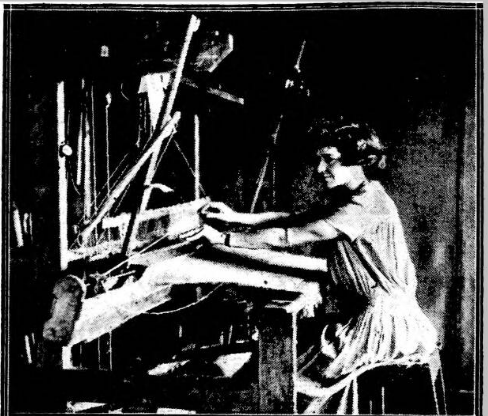 One of Kathleen's own aims at least had been to teach people how to weave in order to provide them with local employment.  Flax had been grown by the river Brede below Winchesea and there was a linen mill there in C18th.  But it all came to a pretty disastrous end during the war. While she was away in London weaving braid for naval uniforms, the studio was hit by a bomb and both looms were destroyed. I think that knocked the heart out of the project for them because at the end of the war, the couple moved to Slad near Stroud in the Cotswolds. Hopefully this isn't the end of the story, though, and someone will know something more about Romney Marsh Weavers and the things they made. I can hardly believe that a few of the them at least have not survived somewhere and if anyone does know of any, please let me know. 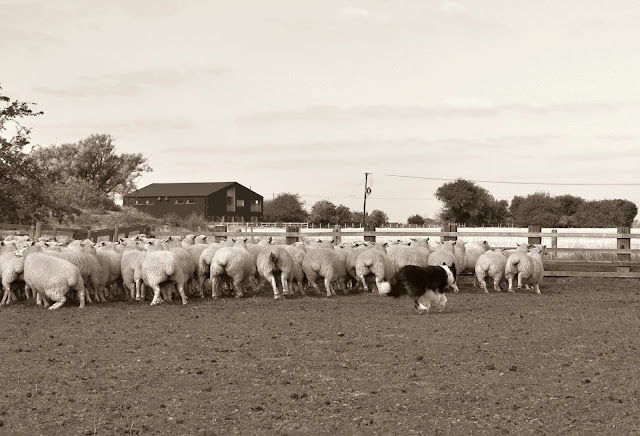 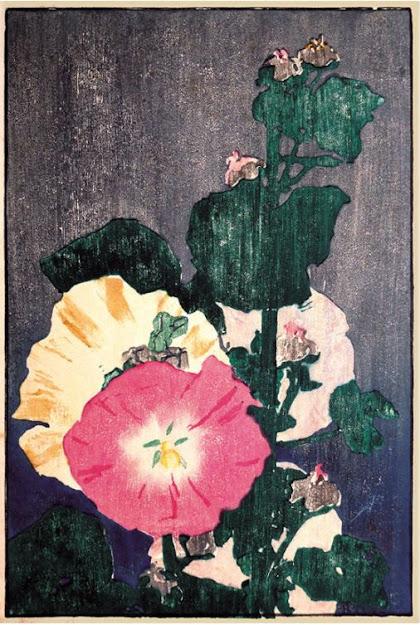 Back in 1908, the educationalist Samuel Clegg published a monograph about the American colour woodcut artist, Edna Boies Hopkins. This included an odd passage where he said he  regretted that her prints had not been made available 'for art school purposes'. In those days it was common practice for art students to study and copy the work of other people. Alphonse Legros taught his students at the Slade to distinguish between the hand of Raphael and the work of his two assistants. But this didn't make the remark any less odd, at least not till he wrote a second monograph about Allen Seaby who did make imperfect (and unsigned) proofs of his own prints available to schools at a reduced rate.

Boies Hopkins was a student of Arthur Wesley Dow, himself a well-known art educationalist by the time Clegg was publishing his monographs. Whether she made her own proofs available is another thing but British students did nevertheless make use of her work in a very direct way as you can see from the nicotianas below. 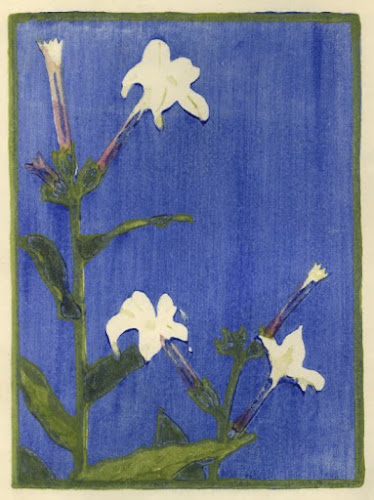 Clegg was headmaster of the new Long Eaton School and one of his school governors acquired four  recent prints by Boies Hopkins for the very purpose. I can't remember offhand whether Nicotianas (below, 1909) was one of them but judging by the children's work made only four years afterwards in 1913, it was. So, here were thirteen and fourteen-year old Derbyshire school children cutting and printing their own colour woodcuts in the Japanese manner with Boies Hopkins examples supplied for them to study by the school.

But why use Boies Hopkins and not Seaby? I think there are two reasons. Firstly, Boies Hopkins concentrated on one image rather than make a complex picture and, secondly, although Boies Hopkins had gone to Japan in order to learn how to make a keyblock, by the time Clegg wrote his article, the keyblock was no more than a vestige in her work and often wasn't there at all. This all made the process of cutting and printing much easier for the children. 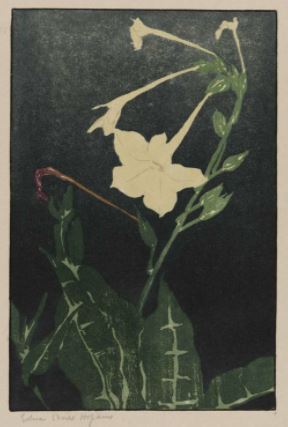 On of these lucky children was Edward Loxton Knight who went on to train at Nottingham School of Art where he specialised in commercial art. When I first wrote about Loxton Knight, I had no idea about the survival of this remarkable series of school prints but, as you can see The primrose-seller (1929) his first professional print, the Boies Hopkins lesson sunk in. It is not so much the flower subject that was like her as the overall tone, particularly the way the print was wiped in the same downward manner Boies Hopkins was using before the first war.

As you can see, Loxton Knight had learned to use a keyblock to define smaller shapes and to provide moulding for larger figures like his primrose-seller. Ironically, he didn't use the Japanese manner at all but printed all his blocks with poster colour, adapting the flat Japanese style to give the contemporary feel of commercial art of the period. But he certainly got away with it and, so far as I am concerned, this first print of his was the most satisfying he made along with The Nottingham Canal. 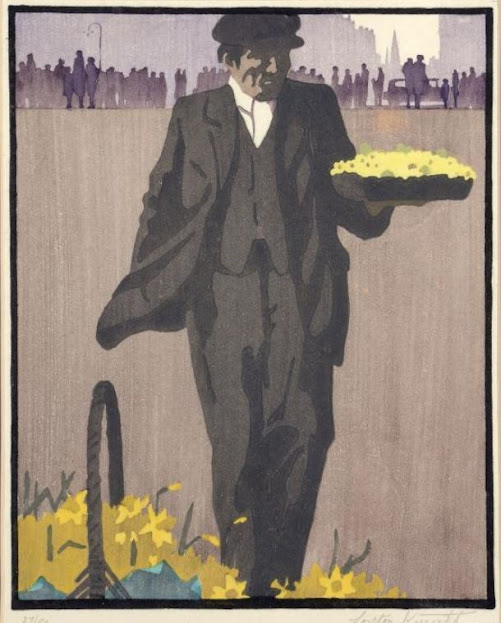 It is in the nature of commercial artists to make use of approximation to gain their effect. But there was another sleight of hand involved in The primrose-seller and one you could only be aware of if you know this location well. The primrose seller is standing on the north side of the market square in Nottingham where people were still selling flowers and newspapers when I grew up. The problem is from where the man is standing, it is impossible to see the spire of St Peter's church at the bottom of Wheeler Gate. It just looked better that way, that's all.