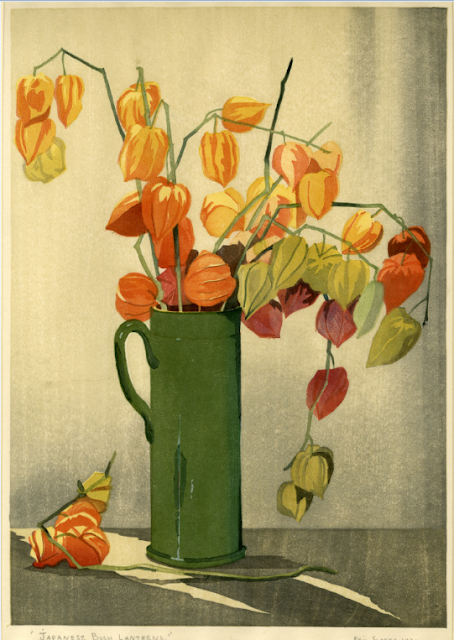 I say new not so much because they are new to me but simply because untill recently the subtlety of Eric Slater's colour woodcuts have not been done much justice by the kind of reproductions we have seen online. No one who reads this blog, or who goes out and buys a print on ebay, should complain. Almost everyone who does will know that ebay photos hardly ever do a colour woodcut justice. (An exception was the recent Mabel Royds, which came up very well). 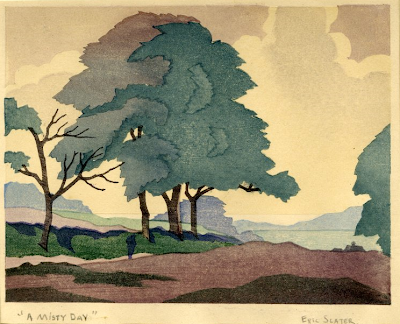 For Eric Slater all that has changed markedly through the photos published by James Trollope. A review of Slater's work in 1929 talks about 'his sensitive treatment of colour' and these new photos finally do bring that out. This of course is all by way of mea culpa to some extent. I've known Slater's work for many years but what you see here are subtle prints in good condition. No one really could deny that Slater's prints can be samey but I have come to the conclusion that isn't the point. By 1929 Slater had probably been making woodcuts for about two years and the same article starts out by saying, 'It has only taken Mr Eric Slater a short time to establish himself amongst those artists whose work one involuntarily looks for at an exhibition'. These images show why but they don't say how he got there. 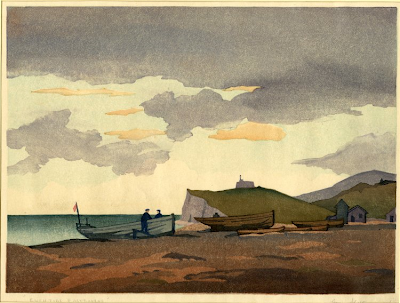 By the late thirties, Campbell Dodgson, who had been Keeper of Prints at the British Museum and owned four of Slater's woodcuts, said the artist had learned the technique from a neighbour at Winchelsea. This must of course be Arthur Rigden Read, not just because he lived at Winchlesea for many years, but because Read's sense of light and colour was so good. That grey-greenish-blue in A misty day is almost straight out of Read. Even if some of Slater's prints can look rather drab at times, what I think he learned from Read was purity of colour and the way pure colours can be played off one against the other as he does so effectively in Japanese bush lanterns at the top.

Finally, if, what I think is called Eventide Eastbourne does not recall the Sussex seaside town we know, I've included a jolly railway poster that puts the little headland you can see in the Slater into context. It does show just how true to the shapes of the landscape Slater was but the poster also brings out what I often feel about Slater; he's oblique, and more low-tide than cheerful. Now you couldn't say that about Read. 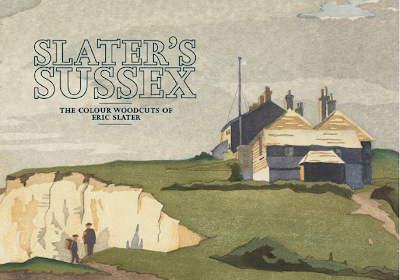 Here is a must for the bookshelves of anyone with more than a passing interest in British colour woodcut: Slater's Sussex, a book by James Trollope, just published by the Towner Gallery at Eastbourne. It has eighty pages, seventeen of them in full colour, and another fifty illustrations. I don't have a copy as yet but James is a journalist who lives at Seaford in Slater country and I know he has used his skills to uncover as much as he can about this popular artist.

It costs £15 and at present is only available from the Towner. You can order over the phone 01323 434670. Both James Trollope and the Towner deserve support on this one.
Posted by Haji baba at 20:51 8 comments:

Alphonse Legros and the 1890s 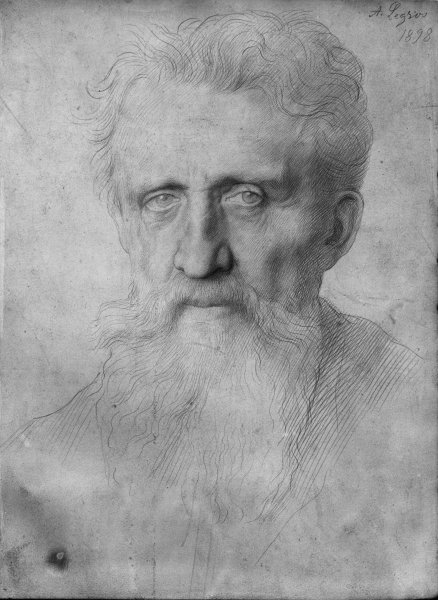 If there was one thing the British artist William Rothenstein liked better than drawing ageing or elderly men, it was reviving elderly reputations. When he knocked on Alphonse Legros' door, Legros had been retired some years from his position as professor at the Slade School of Art. Legros was given to favouritism, and Rothenstein had not been amongt his favourites (the real favourites had left before Rothenstein even arrived) but undeterred as ever, Rothenstein persuaded various artists to chip in and buy a picture that he discovered had been lying unsold in Legros' studio for years. The painting was then handed over to the Tate and a small revival in Legros' fortunes began, based largely on the kind of prints and drawings you see here. Looking at the silverpoint portrait above of an unknown man, which dates from 1898, you can see why it happened. 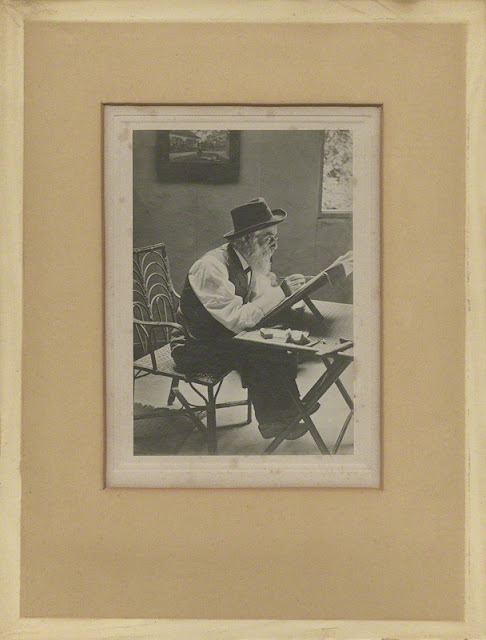 It is academic in the good sense of the word. It owes alot to the Italian old masters, who he venerated, but more importantly it also suited the classical revival of the times very well. Many years ago, I picked up some plans and drawings by the Sheffield architect, Frank Wilson, including a fine copy of the Gate of the Agora at Athens, taken from James Stuart and Nicholas Revett's The Antiquities of Athens of 1767. (This portrait of him by Legros is from the same year as my drawing). Legros may not have endeared himself to his students with his offhand behaviour ('not bad' was a fairly standard comment on their work) but he had a background that reached back to the great French classicist, Ingres, and I think he wisely put his old realism to one side to some extent for something more stylish when he set about the work you see here. 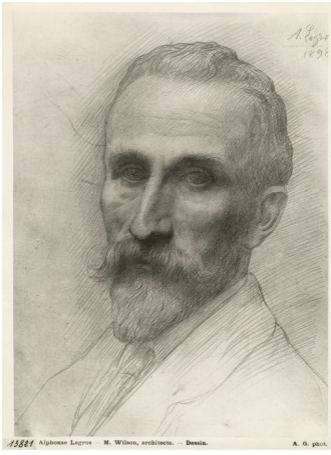 But what strikes me most about this work, is how varied it is. He is not as good an etcher as he is a draughtsman, but the new fashion for lithographic drawings started off by Charles Ricketts actually suited both Legros and the time very well. He had been making self-portraits for many years, but the sheer ghostliness of the one below shows just how far he could adapt a fashionable medium to his own artistic ends. Unlike Rothenstein and William Strang (the real favourite of his) Legros had something wider and more profound to say. In some ways, he came out of retirement like a seer. 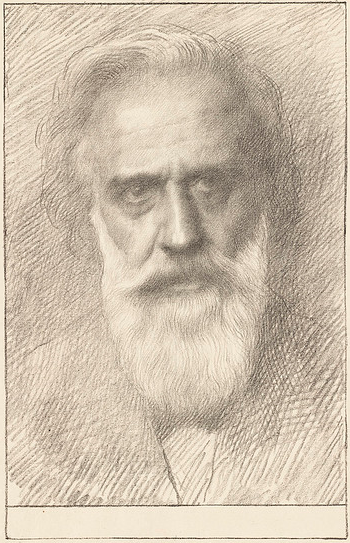 In other respects, it is exactly the kind of Rembrandtism his Slade students were taught to do; to work on the point of the pencil and to introduce a flurry of east-to-west shading. But the haunted look is not the work of a student; Legros could transcend his own method. He builds up from the background with a convincing discrimination. 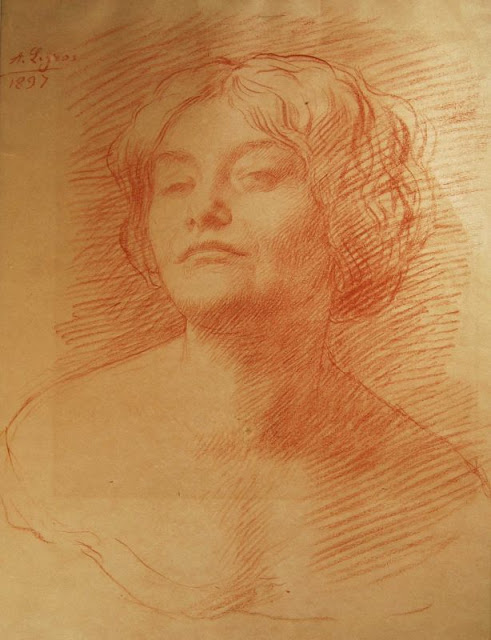 Different again is the portrait of the Slade student, Alice Knewstubb, who went on to marry Rothenstein. It certainly does not have the intensity of the previous self-portrait. Legros has made his own interests quite clear. But the ghosts of the past are there, all the same. Yet what he achieves is someone recognisably modern. Unlike his knowing and nineties satyr, below, Alice is one of us. But as satyrs go (and I like them) it's not bad, at all. 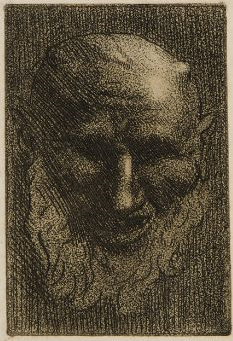 William Strang: the portrait of a period 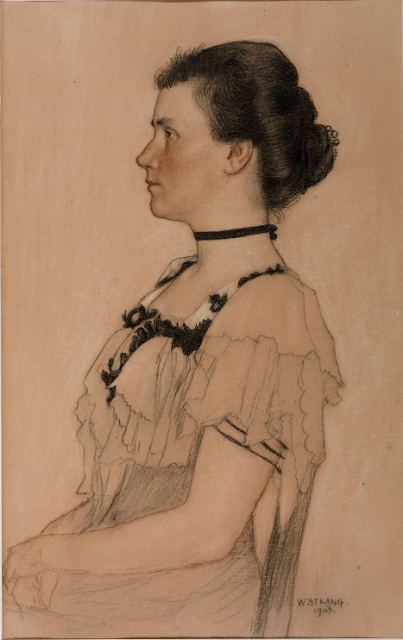 On the face of it, the graphic work of William Strang may not have alot in common with many of the artists already featured on Modern Printmakers, but intuition led me to him all the same, simply perhaps because he is more a part of the period than the early colour woodcut artists are. And apart from that, as graphic artists go, when not too glum, he is pretty good. 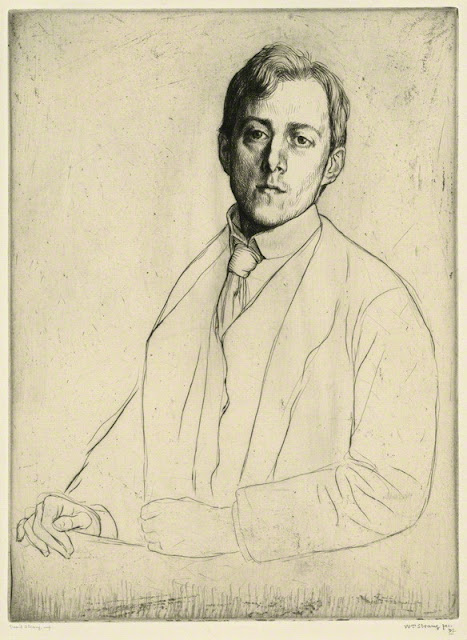 He came down from Dumbarton in Scotland to train at the Slade School of Art as John Dickson Batten and Mabel Royds were to do after him. Unlike them, he had the good fortune to find a fine graphic artist as his professor. This was Alphonse Legros, one time friend of Henri Fantin Latour, Edouard Manet and Charles Baudelaire but now washed up in London (and, in fact, a British subject). He was a man with a history, who would tell his students through his assistants who acted as interpreters, 'If you are going to rob anyone, rob the rich, not the poor.' 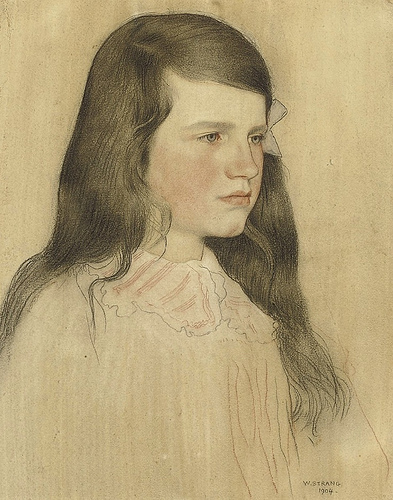 I think Strang took him at his word. If Laurence Binyon's collar and tie (in the etching second from the top) are by Ingres, then it was Degas did the hands for Strang. Possibly not what Legros was thinking about, but never mind. The simple point I want to make is that Strang trained at a time when what you learned had to be filtered through tradition and graphic art, whether print or drawing, was uniformly monochrome, and no doubt he found himself breaking with tradition when he added colour in much the same way the colour woodcut artists did. His use of colour moves in paralell with their own. All the same, the portrait of his cataloguer, Binyon, is just as 1890s in its subtle blend of the casual and the fine as anything by Aubrey Beardsley. 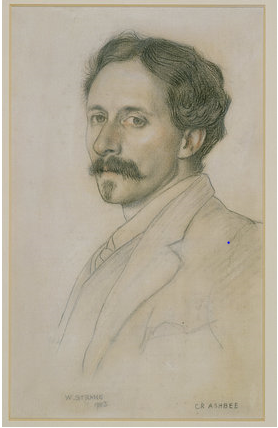 But these portraits owe more to the realism of Hans Holbein than they do to the realism of the French. And beyond that, Holbein also offered him the precedent of adding colour to his drawings. In fact, with Strang it wasn't only a matter of adding colour, he began with tinted paper and applied chalks so finely, I was once able to pick up his portrait of William Cunningham for £10 simply because the auctioneer couldn't see any obvious drawn marks and took it for a reproduction, it is so smoothly done. Somewhere he crossed a line between his early realism and style and turned modern, so much so the portrait of the girl at the top could be Viennese if it were only that more abstract. I wonder what Legros made of it all, these suave, sombre, unsettling beings who needed colour - well, apart from this one. 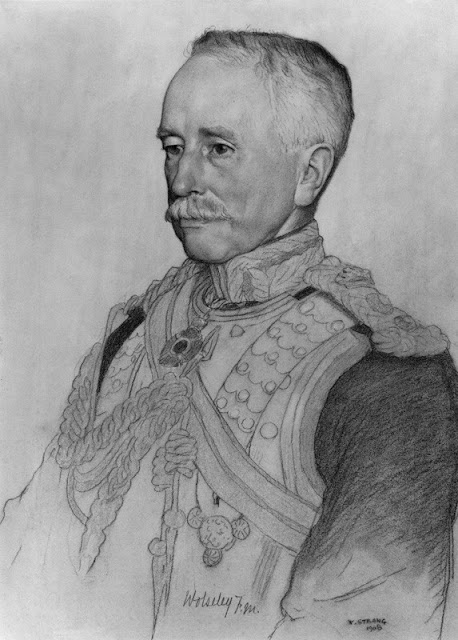 
Eric Hesketh Hubbard was a man of many parts, as the prints you see may suggest. Not only was he a remarkably suave painter, his railway poster designs had the requisite sweep and panache, he published both books and prints, and was good at promoting all of these efforts. The gulf between the way of life he shows in these deceptively simple prints and his own was a big one. While his Romanies and cider-press men travelled the back-roads and heaths of the New Forest, he was sailing across the Atlantic to New York. It sometimes surprises me that he made such workaday woodcuts at all. They were all put out by his Forest Press at Breamore in Hampshire, and in such large numbers, it also surprises me that more haven't come my way. 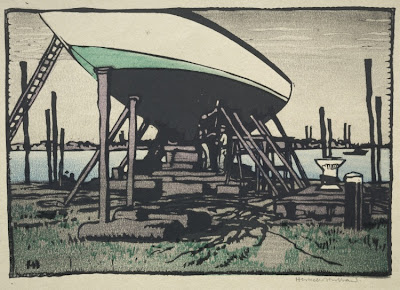 They have no more in common with the lush woodcuts of the Colour Woodcut Society than they do with the Grosvenor School linocuts in progressive mode. What he did was take the bravura manner and emphatic keyblock of Frank Brangwyn and apply it to the 1920s. Like Brangwyn, he is third force, fertile and with much the same facility, though not so stagey. He avoided fashion like the plague. And perhaps in the end that is part of the appeal. How many artists would set about making a portfolio of old gates in a cathedral close? It isn't chic, but it sure is canny. The other old rogue behind  him was Turner. Hesketh Hubbard was nothing if not educated about art and what people wanted. 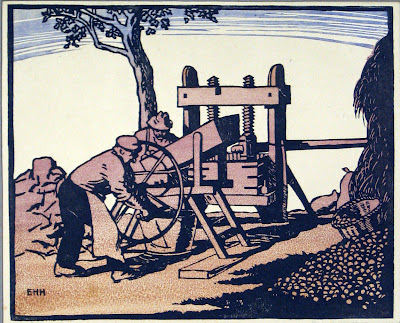 These are essentially works of translation. Exactly the same thing was said about Yoshijiro Urushibara after he had been working with Frank Brangwyn for a number of years. Unlikely as it sounds, Urushibara took Brangwyn and gave him nuances he could never have found for himself. These prints do something similar. They tone Brangwyn down, and are as likeable as they are blokish. And unlike Brangwyn, they are also deeply English, images of people getting on with things and minding their own business, determindly out of fashion. 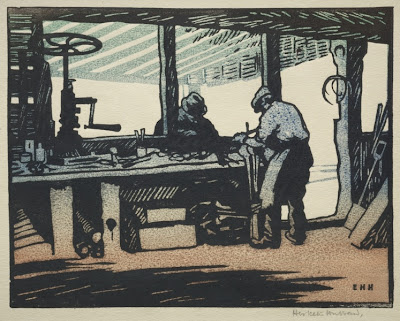 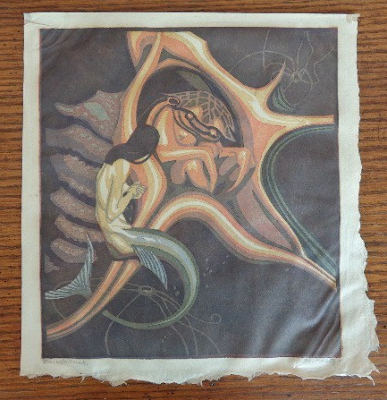 Out of interest a couple of linocuts by Norbertine von Bresslern Roth have come up on US ebay. I've not seen either of these before. Both are apparently illustrations for Oscar Wilde's The young fisherman and his soul. I was specially taken with the paper she used, possibly because the images are small. It makes the whole production look precious. 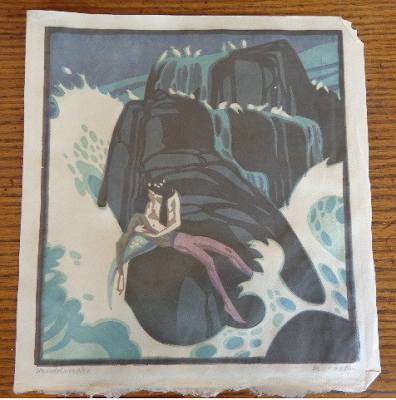 I also include a close-up so that you see just how good her technique was.Starting at $800 each.