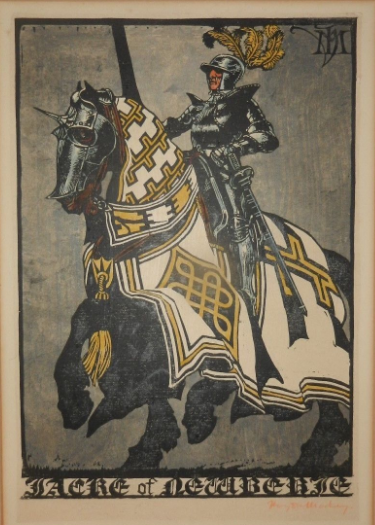 Every once in a while an artist who isn't all that talented manages to excel himself. Exactly how they do this isn't always obvious but with Haydn Reynolds Mackey's linocut Jacke of Newberie my first impression is the print  was by Arthur Rigden Read, albeit Read out on the booze. The colours are right (more or less) and the limited use of colour is right and the print takes Read's gold medal La cite de Carcassonne, with its heraldic shield and lettering as its starting-point. I have to say if it had been by Read, I would have bid without hesitation. As it is,  I decided against, simply because there is something both spurious and irritating about the work of Mackey. 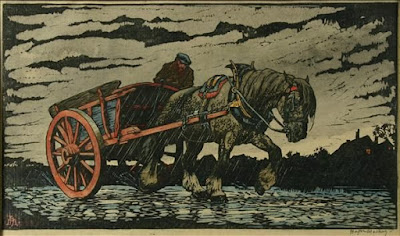 Mackey trained at the Slade School of Art and had the benefit of attending the life-class under Henry Tonks but by and large, Mackey liked to represent heavy horses as much as human beings. With Jacke of Newberie he was successful because he simply bought together horses and with a sense of character and theatricality and I have to say it worked. I would mind less if  Mackey's prints weren't so manufactured. He didn't use the demanding Japanese manner but added colours in an odd way. Only the keyblock was printed, so you miss the real interest that an original print can have and they end up having more in common with the kind of hand-coloured work made by William Nicholson or the Cuala Press. You have to see it in context and I know very little about Mackey or what relations he had with other printmakers (if there were any). I just thought Jacke of Newberie was well worth a look but whether it was worth spending good money on is another thing.
Posted by Haji baba at 11:08 1 comment: