Slater's Sussex, the colour woodcuts of Eric Slater: a review 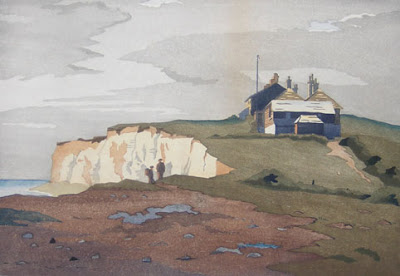 A very unusual event this week, the publication of Slater's Sussex, the colour woodcuts of Eric Slater by James Trollope, the first study of a British colour woodcut artist since Malcolm Salaman's William Giles as far back as 1928. I think the Towner gallery at Eastbourne, who are the publishers, would have been wiser to make more of that than to claim rediscovery of Slater's work, which will strike most readers of this blog as dubious. But more of that later. 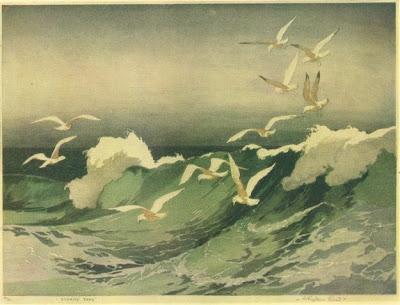 Anyone who has chosen to write about a colour woodcut artist soon discovers why so little has appeared untill this week. There are probably only two or three artists where there is enough material for a writer to go on. It was even trickier for James Trollope, because in many ways the subject chose him. He happens to live in the small town of Seaford in Sussex where Slater made most of his colour woodcuts between about 1926 and 1938. Coming across Seaford Head at auction was where it all began for him, and despite a determined effort to discover as much about Slater as he could, including a house-to-house search, his subject remains doggedly elusive. No fault of the author. Despite a valiant effort to place him amongst the other colour woodcut artists of the day, Slater comes over as less intriguing than his prints. 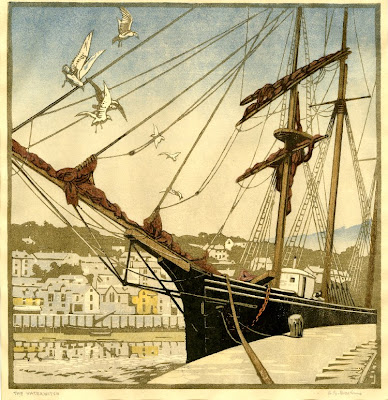 I decided to take a sea-faring approach when it came to illustrating my review. In May, 1940, the work you see here by three artists associated with Winchelsea in Sussex - Eric Slater, SG Boxsius and Arthur Rigden Read - was hung together at exhibition. Prints such as Read's Yo ho ho and a bottle of rum and Boxsius' Looe, Cornwall are yet to come my way, but the emphasis on sea-going and the southern British coast is there for all to see. Far from being localist, the exhibition recognised the importance of the sea to national defence. (Uncannily, the Dunkirk evacuation of Allied forces was ordered the day after it closed). James Trollope writes about the very local nature of Slater's subjects, but it is the history and the look of that coastline, with its cliffs and coastguard stations (see top) that has the greater meaning for me. 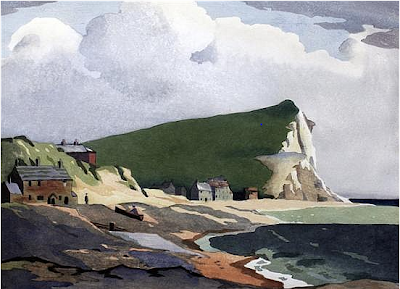 I happen to be a fan of Slater country myself. I lived at Frog Firle near Seaford for a while and even at the Beachy Head clubhouse above Eastbourne for a month. The landscape is one of the most different and affecting in all Britain. It was Slater who saw this, more so than Eric Ravilious, who was brought up in Eastbourne. James Trollope rightly brings out Slater's oddness, but he is no more odd than the coastline he describes, certainly not if you are used to the Lincolnshire coast as I am. So, the book includes a walk in Slater country, an explanation of the technique he used, it is generously illustrated in colour. So far as the early history of colour woodcut goes, Batten and Fletcher had made a successful print before they read Tokuno; his pamphlet only helped them to sort some of the problems out, but not all. It was published in 1894, not 1892, which was the date of the report it comes from. Nor was Tokuno a printmaker; he was an official. But none of this will be of great concern to most readers.

There is the low-down on more famous contemporaries like Frank Morley Fletcher, John Platt and Read, but no photographs of the artist, or any of the houses he lived in, London or Sussex. Generally, I think it's accepted that the neighbour he had at Winchelsea and who gave him private tuition in colour woodcut is Read (Campbell Dodgson does not name the artist). 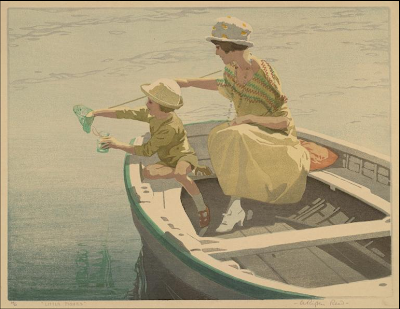 The book contains a thorough and useful list of 45 colour woodcuts made over a period of about 12 years. Even though Slater's prints are often smallish, though not as small as Boxsius, bear in mind that Allen Seaby, the most prolific of them, made 100 in a career of 35 years or more. So, Slater showed commitment, and it is all the more surprising that he appeared to give up after the success of having The Stackyard published exclusively in the United States in 1938. James Trollope associates that year with the death of the artist's mother who he had lived with as an only child since the death of his father in 1904. There are no wife and children in the story either, and it's the case that many of these artists have been best served by their grandchildren. Slater has been fortunate to have caught the eye of James Trollope. But who receives fair play is hit-and-miss. The boy in Read's Little fishes (above) is presumably his adoptive son, Clifford, and the woman Kathleen Rigden Read. Slater's work is less obviously personal than Read's, but if Read looks farther, as the book says, in his own way, Slater looks deeper.

You can see a short BBC Sussex film about the artist and the book at http://www.bbc.co.uk/news/uk-england-sussex-22312620  Slater's Sussex is available from Towner at £15. Ring general enquires on +44 (0)1323 434670 to order by post and include a further £2.50 to cover costs. There is also e mail contact on their website.  I suspect Towner have not reckoned with the enquiries from outside the UK that I think they are going to get. Ah, well.
Posted by Haji baba at 08:39 8 comments: