'S. G. Boxsius from the Roof' : a prospectus for a new book & two new images 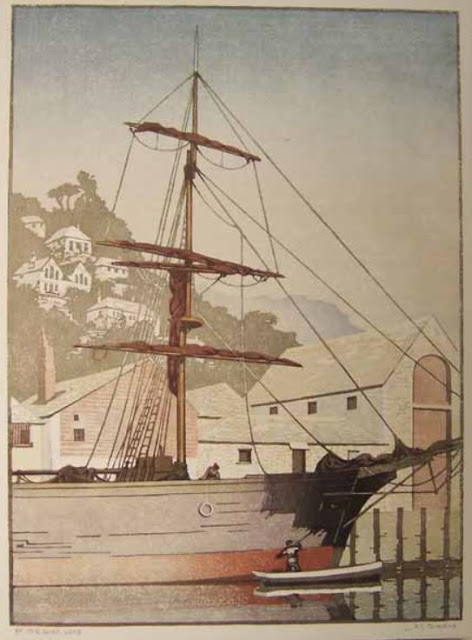 As artists of lesser standing and with less appeal than S.G. Boxsius have had small books published about them in recent years, I thought it was time Boxsius had one to himself more or less. This should be enough to please some readers at least although it would not be necessary or possible to devote a book to Boxsius on his own. There is not enough material out there about any of these artists to write a book about them. But as Boxsius was doing something new when he began making linocuts, a book would provide the chance to include linocut contemporaries of his like Isabel de B. Lockyer, Chica MacNab and Robert Howey. It would also be an opportunity to tell the true story of how the whole linocut trip took off well in the corrective fashion of Boxsius himself  before the Grosvenor School opened its illustrious doors in Pimlico. 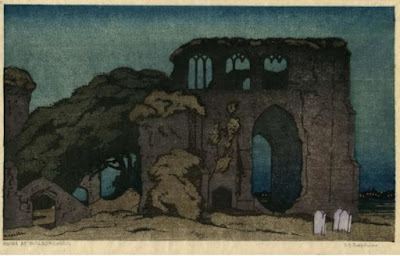 In order to pull this off, I need help from readers. The number of prints by Boxsius in American and British museum collections can be counted on ten fingers. This is not very many for someone who produced at least thirty-five prints between about 1928 and 1938. But collectors have been taking an interest since the 1980s when Alan Guest identified Boxsius as one of the best practitioners. This means that the majority of his prints are in private collections in both the U.S. and Britain and I do need any readers willing to have their own images photographed for inclusion in the book to come forward. Without loans, this will not get off the ground. 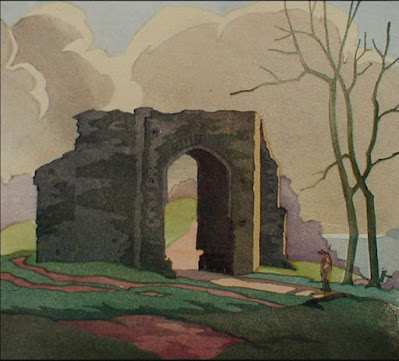 In the mean time, I include two prints you may not have seen and a better image of London from the roof than the small one you will have. (It is the same print I would think but in larger format). At the very top of the post is one of Boxsius' classic holiday images, By the quay, Looe from 1937. Presumably it shows 'Waterwitch' having her hull painted or caulked. The ship had already appeared in his work in 1934. Indeed there are times when he appeared to be short of new ideas. In other respects, he looked at his subject the way a sculptor does, turning it round to view it from all sides. Some of you will know the photograph of him working on a large tankard at Camden School of Art. There is also another photo of him surrounded by classical casts in the art room at Bolt Court. These are both telling photographs. 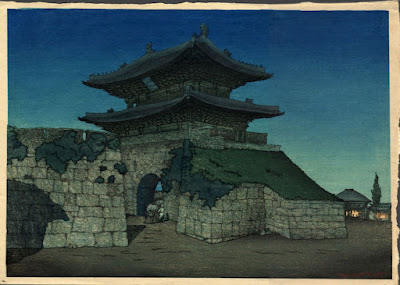 But not content with re-using images of his own, Boxsius often made productive use of the ideas of other artists. Ruins at Walberswick from 1931 (second from the top) depends on Eric Slater's The land-gate, Winchelsea from about 1926 (third from top) and the colour woodcuts of Cornwall that Sidney Lee made about 1905. (For readers who do not know the country, Looe is in Cornwall).  Nothing shows the corrective temper of the man better. In this respect, Boxsius was also a link between the old school colour woodcutters of the pre-war period and the new school linocut artists of the twenties. You can decide for yourself on the relative merits of the two prints by Boxsius and Slater. But you should know by now that there is more to Boxsius than meets the eye and there is a second more surprising source for his print in the shape of Elizabeth Keith's East Gate, Seoul by moonlight made in about 1920 (above). All this only goes to show how aware Boxsius was and how much he could absorb. Ruins at Walberswick isn't Boxsius at his best. That said, at this stage in the proceedings I will probably buy anything by him I can lay my hands on.

Sorry to say I have mislaid some of the email address of readers who I know own work by Boxsius. Anyone who can help though can contact me (Gordon Clarke) at the usual e mail cgc@waitrose.com. I can then send them a check list of Boxsius prints. 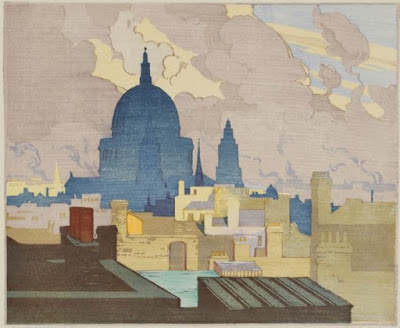