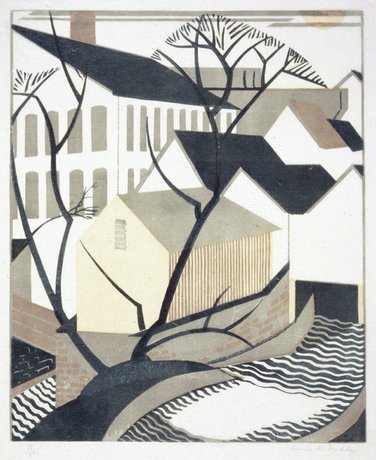 I have brought these three artists together because all took part in the 1920s printmaking scene in Glasgow that also included Ian Fleming and Ian Cheyne, both of whom have already had posts of their own. Of the three women, it was Chica MacNab (1889 - 1990) who perhaps played the key role. From a colonial background, she was sent home to Scotland for an education, first at Kilmalcolm School, then at Glasgow School of Art. Not that she learned the art of printmaking there because by 1921, before she attended the school of art, she was a founder member of the Glasgow-based Society of Artist Printers. It isn't perhaps surprising that once she had finished her course, she was offered a job and promptly set up a class teaching colour woodcut at the School of Art in 1925. (Her students included Ian Fleming and Alison MacKenzie). Yet for all her significance, I have only ever come across one of her prints, in some ways a rather disappointing colour woodcut called From the Barr Hill. I say disappointing because her style is more in line with the Scottish genre printmakers of the pre-war years. Elizabeth Christie Brown, Jeka Kemp and Thomas Austen Brown are often hard to distinguish one from the other. So much so that some of the unsigned woodcuts attributed to Austen Brown on this blog are almost certainly by his wife. One lives and learns. (And I will add here that Clive Hazell believes she is the better artist). But it is hard to judge MacNab herself. Her woodcut class ran for only two years and her prints are shockingly rare. All the same it seems to me at least that she provided a learning link between the earlier colour woodcut artists like the Browns and Elizabeth York Brunton and the younger ones who went on to reject the genre and historicist styles of their teachers. Even so, York Brunton and Ethel Kirkpatrick exhibited at Glasgow alongside artists like Findlay and Cheyne with their modernist aura. And at the end of the day, it goes to show how much they depended upon those small societies with their joint exhibitions to make a living. (Not that that was ever a problem for Ethel Kirkpatrick). 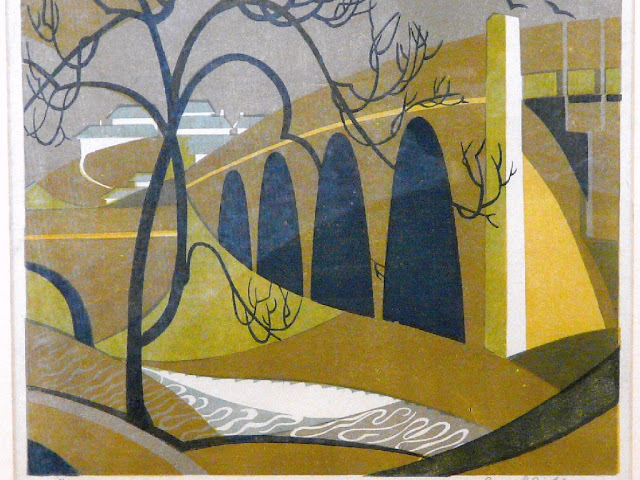 Even more frustrating was the career of Jessie Garrow (1899 - 1993). She was also printmaking before the onset of MacNab's class but the one print I have seen by her is the extraordinary colour woodcut called The wave. The three graces have been transformed into stylish young women alarmed by a wave splashing over the sides of a quay and perilously close to their fashionable stockings and shoes. It's both mocking and stylish and it's such a shame I can't dig up a suitable image for you. (I am hoping when lotusgreen reads this, she will locate it in The Studio for me). But what is highly original about this prints is the complete lack of colour for the figures, which are picked out predominantly in outline and stand pale and stylised against grey and mauve backgrounds. How an artist who could come up with such a strikingly original print could now be so little known is, frankly, beyond me. In the 1980s, when she sold what was left of the work from her husband Ian Cheyne's studio, she had not a single piece of her own work left to offer. Not a thing. Like so many women artists of the period, she also went on to work as an illustrator, but even there I have only ever tracked down one title she worked on.

So, very reluctantly, I have been forced to illustrate this post with three prints all by that coolly beautiful artist, Anna Findlay (1885 - 1968). At least, there is a new one here, a telling colour woodcut of Glasgow tenements where you can see her interest in subdued tones and architectural form at an early stage. Needless to say, her work is also shockingly rare and you have not seen this image online before. It really is a lovely link between the soft focus realism of the earlier Scottish woodcut artists and the linocuts that she then went on to make after studying at the Grosvenor School with Claude Flight. She left Glasgow in the late twenties and went down to St Ives in Cornwall where her brother, James, was an active member of the Arts Club. She may well have studied with Flight just before she began to exhibit at St Ives in 1928. She would have certainly known about the Grosvenor School being set up via Chica MacNab (her brother, Iain MacNab was the principal). She moved back to Glasgow in the late thirties, leaving behind this small poetic legacy of linocuts as elegant as other Grosvenor artists were outlandish. And if for no other reason than this, I have faith in Claude Flight's prophecy of the modern.