On Monday a print called A Highland Loch by the Scottish artist, Helen Stevenson, went for just over £200. This may well be the highest that one of her colour woodcuts has gone for on on ebay. The irony is that someone paid that amount for one of her cheaper prints. How do I know this?

I will admit I don't have any exhibition record for the woodcut with a price, but all the prints that used a limited number of blocks as this one did, with its three colours and the keyblock, were designed to be cheaper. Eric Hesketh Hubbard (below) specialised in this kind of print and even went so far as to collaborate with Frank Whittington, who cut the block for him. Hesketh Hubbard would have been quite capable of making colour woodcuts in the Japanese manner, but what he wanted to do was produce affordable prints at his own Forest Press.

But what is affordable today? And do you seriously go out and spend that much when you could buy directly from a dealer for the same amount? It's not as if Stevenson is rare by colour woodcut standards. But the point I am making is that I think Stevenson, like Hubbard, made a conscious decision to limit the work she put into the print in order to make it cheaper and much as I like Stevenson's work, I don't think A Highland Loch finds her on top of her form. Frankly, what Hesketh Hubbard did with his gypsy encampment is superior - and he only used one colour. Where he gains is partly with Whittington's complex cutting and unusual use of hatching. 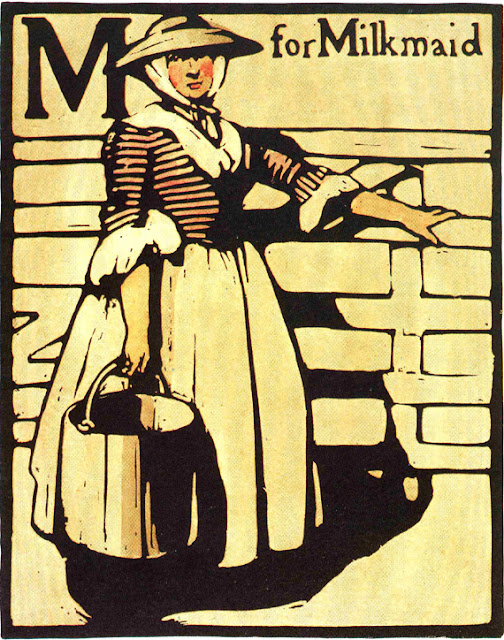 The master for them all was William Nicholson (above), with the illustrated books he made in the late 1890s. Almost all of his prints, though, were hand-coloured, and were not woodcuts at all. But he showed what could be done with black and a few complimentary colours. And I think this was where Stevenson fell down. Like Nicholson, Hesketh Hubbard wisely opted for black and a pale-ish sepia. The colour of the tree, similar to the other two artists is fine, but the green strikes me as intrusive. You have to know when to stop. 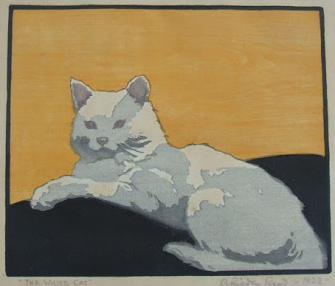 A later master of this sub-form of black and yellowish tones was the much-loved and lauded Arthur Rigden Read. As it happens, one of his prints that took this approach failed to sell on ebay, even though the starting-bid was reasonable. Unfortunately, I don't have an image, but his cat (above) is better, anyway. What Nicholson and Hesketh Hubbard achieved in their rather austere way with their umber and ochre, Read softens and enlivens with a complementary grey. It remains easier to print, but dumps the chapbook manner. 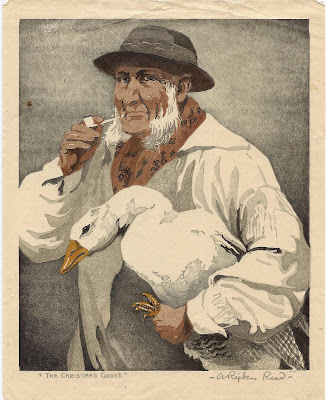 Like Nicholson, Read knew that no matter whether he was depicting a cat or a cowman, these limited tones suited portraiture more than landscape. But if the few colours help to give Read's farmer in his Sussex smock great rustic charm, he was one of the few to use the same approach with far greater subtlety. Read was not a one-note printmaker. Obviously, many artists limit the colours and tones they use to great effect. What Read did was to achieve a lovely balance between the black-and-brown style and the greater sophistication of an artist like John Platt. It all depended on what you could do with grey. Or what you could do with £200. Better spent on Nice weather for ducks if you ask me. 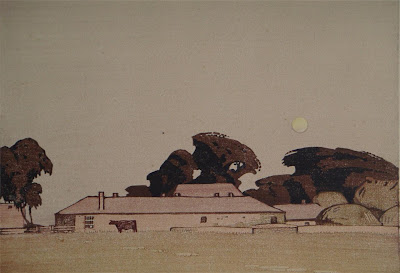 For all fans of the British artist, SG Boxsius, an image of his 1933 linocut Afterglow has turned up. It's a fine image, seeing him depicting elm trees with considerable verve. He was getting into his 'less is more' phase by that time, and I like the way he has piled up various shapes behind the farm building. We are used to his single figure masterstrokes by now. The image would be less interesting without the attentive cow. It's remarkable what he achieves with his careful build-up of shapes and tones, and this print shows him very much in William Giles mode, with its depiction of an exact time of day and its mood as a metaphor. It' s always interesting to wonder about the other artists an artist had been looking at. Irresistibly, the miniature scale suggests John Sell Cotman. It's outwardly simple enough, but the complex feelings of a man in his mid-fifties do come through as a result. (He died only eight years after he had made this print). 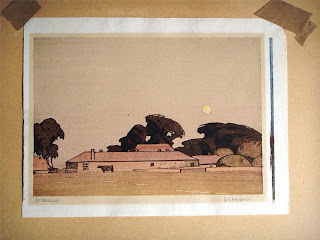 Unfortunately, I like the condition less. It is quite badly faded all over and I suspect the colours you have here are less vivid than they should be. But this is the first time I've seen this print, so I can't be sure about that. Even so, £175 is quite a hefty price to ask for something in a lot less than perfect condition. As we all know by now, Boxsius isn't a rare artist. His work turns up even more frequently than, say, Seaby, Royds or Platt, simply because he was rated at the time and his work obviously sold. You will find this on British ebay and will see what happens.
Posted by Haji baba at 19:45 2 comments: