Jean Armitage: tangled up in blue 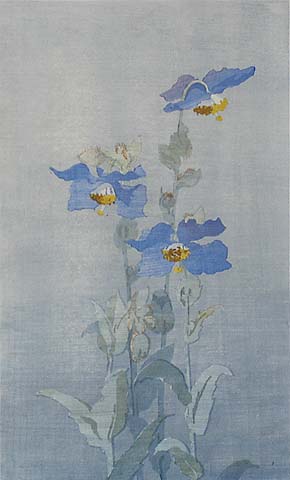 There is still not alot known about the British printmaker Jean Armitage (1895 - 1988). I even hesitate to give these dates for her but they do look about right if you consider her training and her surprisingly long career. I think she must have been a Londoner as she lived in Camberley in the twenties and thirties. She trained at the Byam Shaw School, a private London art school for drawing and painting, which had been set up in 1910, but is best known today for colour woodcuts.

She may also be almost unique for having learned to make colour woodcuts from John Dickson Batten (1860 - 1932) a pioneer of the use of the Japanese method of printmaking back in the 1890s. From being a revivalist of the colour print, he went on to being a revivalist of the use of tempera, and this may have been how Armitage came to know him. Ironically, I think she may have been more influenced by Mary Batten (b 1873). 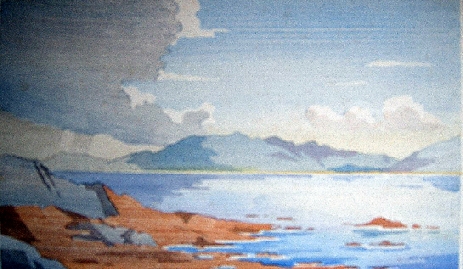 A gilder and woodcarver, I think it's safe to assume she learned the Japanese method of woodblock printing from her husband. Unlike him, she also adopted subject and style from the Japanese. Her Fritillaries owe a great deal to Hokusai's Large Flowers portfolio of the 1830s and I think the same can be said for many of Armitages flower prints. Unlike Batten, she interprets Hokusai with tremendous delicacy. That her style veers towards 1930s whimsy at times, is a part of the deal, I'm afraid. She had to sell prints.

She is certainly far less well-known for her landscapes but Loch Linnhe shows the same subtle use of blues and greys as the meconopsis at the top. This looks more Japanese to us partly because of the positioning of a single plant against a neutral background. But, as you can see by comparing the two prints, her sensibilty follows through. And this is what I like about her work. It doesn't matter really very much if the third image of long-tailed tits looks twee. A subtle use of colour and fine detailing are common to all three woodcuts. And the same craftsmanship is there. 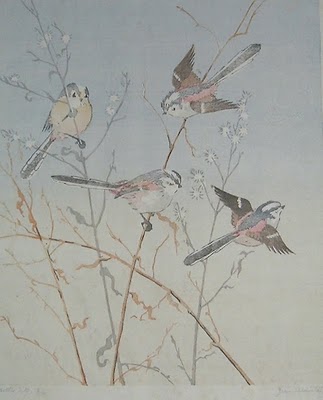 And I would not be at all surprised to learn that it was Armitage's prints that Claude Flight complained about when he made his criticism that colour woodcut mimicked watercolour. It may have mimicked watercolour but I can tell Claude Flight this: these artists' prints were almost always better than their watercolours. Artists like Armitage had found a successful medium for themselves and fortunately her work is still something we can all afford, unlike Flight's contraptions.

I should add that I am grateful to Hilary Chapman for Loch Linnhe and William P Carl for Blue Poppies. Neither print is now for sale. I'm not in the least surprised.
Posted by Haji baba at 18:02 3 comments: 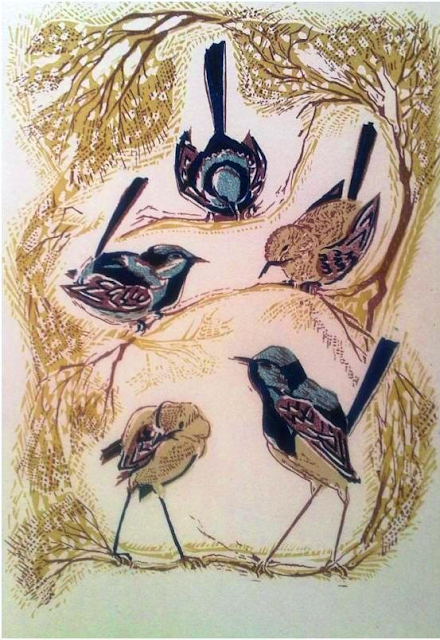 Back in October, 2010, there was a post about the menu cards that had colour linocut designs by the British artist Julia Mavrogordato on the front. They were produced for the Orient Line that sailed between London and Sydney from the 1930s to the 1950s. Now two more designs have turned up on ebay. [ Please note that since this post went up, they have been sold - to a reader of this blog]. They have been put up by a dealer in Brisbane at the reasonable starting bid of $25 and although I am not a huge fan of Mavrogordato, I still think any discriminating collection of modern British linocuts should contain work by her. So, here is your chance to acquire one or two without breaking the bank. 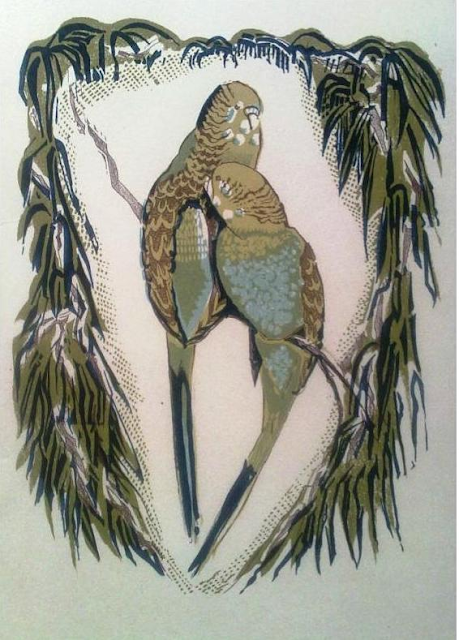 I was fortunate enough to inherit mine but I would nevertheless prefer to have the group of robins at the top here. I like the blue that Mavrogordato used  on this one. I think it's livelier than some of the others as a result. I also suspect now that the colours on the ones I own may be a touch faded. The ones you see here are more recent (from the fifties) and that may explain why they look brighter to me. It's going to be interesting to see how many of these images appear, anyway. I have no idea how many designs she made but you really can't go wrong with any of them. You will find them easily by doing a search on UK ebay.