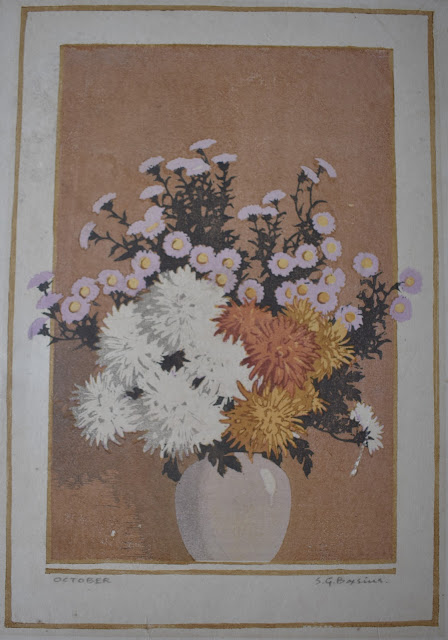 October by S.G. Boxsius is not the rarest print of the ones I am sure he made. I have never seen either the colour woodcut Rouge et noir nor the linocut with the intriguing title Ruins at Walberswick (1931). They will be about somewhere but exactly where is far from certain. The only image of October I had seen before was of a proof in poor condition, but it was good enough all the same to suggest the print was well worth seeking out. But the laid-down proof of October that you see here was one of the luckiest of finds because it was used as a backing-mount for an image of the cricketer, Len Hutton, and as a result has remained in nice bright condition though it has been marred by a nasty scuff.

This print was given to me by a very generous reader who had bought the cricketing picture for the frame and found a signed print underneath by an artist he had not come across before. I certainly could not think that any collector of Boxsius would turn it down (and of course I didn't). The main section of the arrangement of chrysanthemums and Michaelmas daisies is classic understated Boxsius and a beautifully organised description of light bouncing off the petals of flowers - all this with no recourse to a key-block. The ginger jar looks awkward because it is not clear what it is sitting on. The jar is also too small and there is a bit too much space above the flowers. But I don't think this would put anyone off buying it simply because here was Boxsius handling colour in a way that only he could do - and you may not be surprised to learn that his elder brother was an artists' colourman. 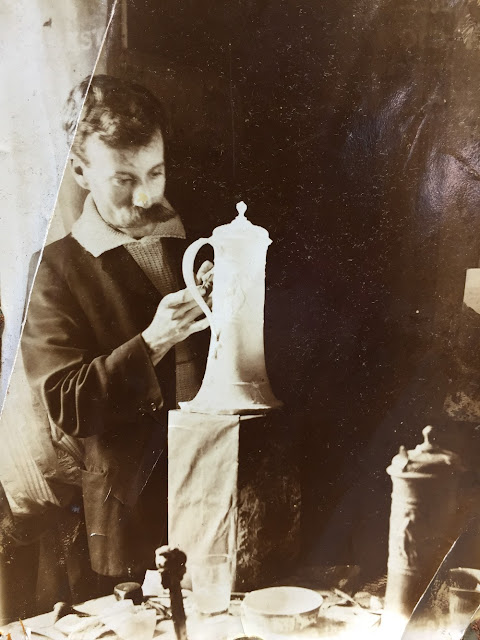 So, what happened? The print has obviously been framed at some stage and then removed later on from its window mount. My hunch is the top image could be an early version. The other one I have seen is brighter overall with the daisies a stronger colour and the gold chrysanthemums better differentiated (as you can see from the edited image below). This suggests to me that the one I have is a personal copy. Nothing else really accounts for the cricketing image. Unfortunately, so far as I am aware, this no longer exists. What I would say to any reader who is fortunate enough to find another image of October, the darker one may be the final version though it hardly matters if they are signed. 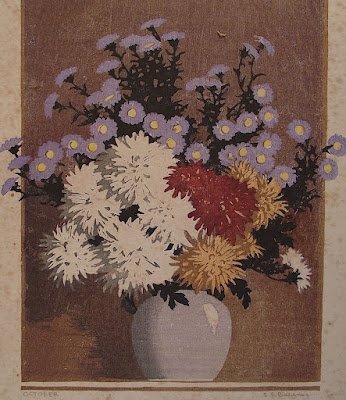 Cricket provides the clue but like so much about Boxsius it is an intriguing one. Boxsius was a life-long cricketer and played for Highgate Cricket Club for many years. Where many artists would wear a smock, you can see him in the photo working on a piece of course-work at Islington School of Art about 1910 wearing his cricketing sweater. After completing his course, Boxsius stayed on at the school which had become Camden School of Art. Working alongside him was a cricketing colleague, E. A. Huskinson, who joined the staff at Bolt Court four years after Boxsius became Art Supervisor there in 1920. 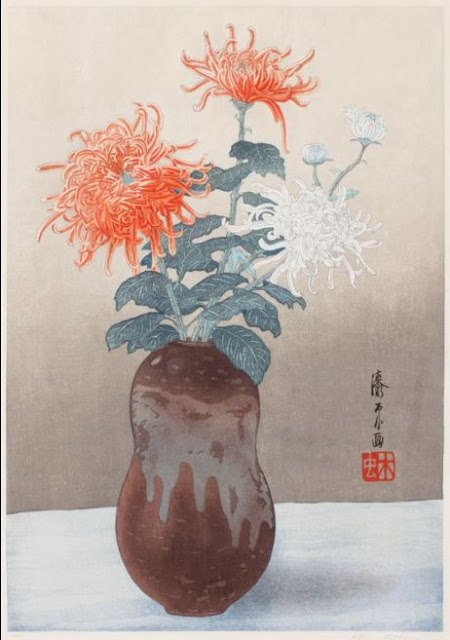 As a subject, it isn't typical Boxsius but he did re-use the idea of mauve flowers in the later calendar image, Noonday. By 1930, a number of artists who Boxsius would have known had made flower arrangements part of their stock-in-trade. The two most obvious one are Yoshijiro Urushibara and Eric Slater. The most obvious starting point was Urushibara's own image of gold and white spider chrysanthemums first exhibited in 1922 (and, so far as I am concerned, his very best print). Like so many Western artists, Slater made his first flower print in 1928, he also played down the container and like Boxsius made use of a plain ginger jar. For the oriental artist, the ceramics were half the point and help to explain where it is that the Boxsius image fails. Arthur Rigden Read's flower pictures were admittedly a mixed bag but I have gained a lot of pleasure from Roses, which he first exhibited in 1925. Again the Urushibara connection is evident because Read was the only other British artist to make use of the technique of karazuri or light embossing. As with Boxsius and Urushibara, Read knew that flower images succeeded only if the artist depicted the reflection of light well enough. The limitations of lino were also made fairly obvious. The embossing Read employed gave the white petals a subtlety that lino cannot achieve - and that doesn't show up in reproduction, so it isn't  here.