Some colour woodcuts on British ebay 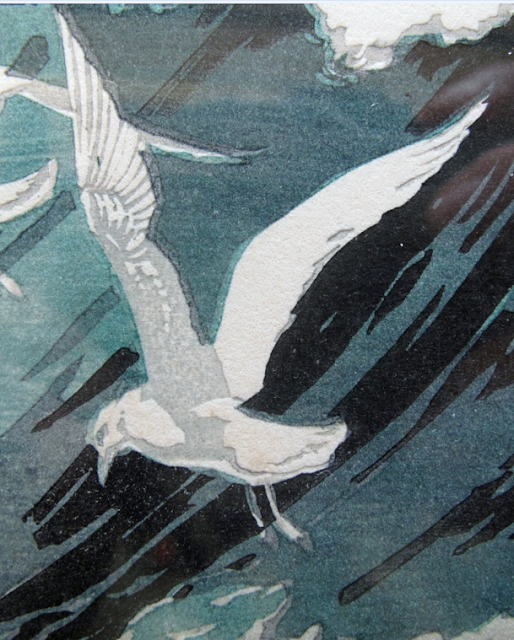 There has been such a dearth of good colour woodcuts on British ebay for such a long time, I began to wonder whether anything decent would ever appear. Kenneth Broad's pair of nursery printsare now for sale and they are good, but we have seen them more than once before and, what is more,  I remember the way they set the whole show rolling when Clive Christie bought them soon after he had started his old blog 'Art and the Aesthete'. Arthur Rigden Read's virtuoso Stormy seas has never appeared on British ebay. The only image available online until very recently was one lifted from The Studio, a 1920s reproduction that did Read's print little justice. 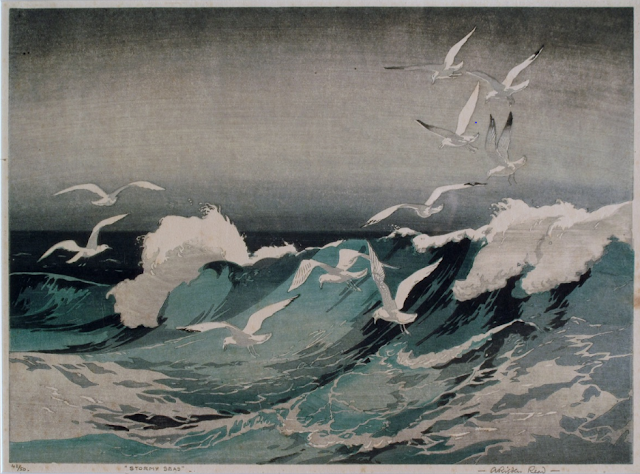 Stormy seas is not Read at his very best. It owes a lot to Hans Frank's 'Seagulls' of 1924 although in many ways, it's the better print. Read was never averse to pinching good ideas and often made witty use of other artists but he had a weakness for birds and they failed to bring out the best in him. 'May morning' was an early exception; for all its bravura and undoubted skill, Stormy seas is seascape and Read just wasn't any good at landscape and was wise enough to avoid it and concentrate on figure subjects or still life. Am I being too critical? I don't think so, because when Read's prints were good, they were very good indeed, he just wasn't a good enough artist to avoid a hackneyed image like this one. That aside, the sense of the waves and the play of white and green is pretty sensational really and very clever. The print makes a very rare use in British colour woodcut of the technique known in Japan as karazuri or shallow embossing. You can make out what is happening on the detail at the top. And in case, you dod not recognise this image I have used here from its recent appearance, it's because the proof you see here belongs to Gerrie Caspers from The Linosaurus, so many thanks to him for a superior photograph. 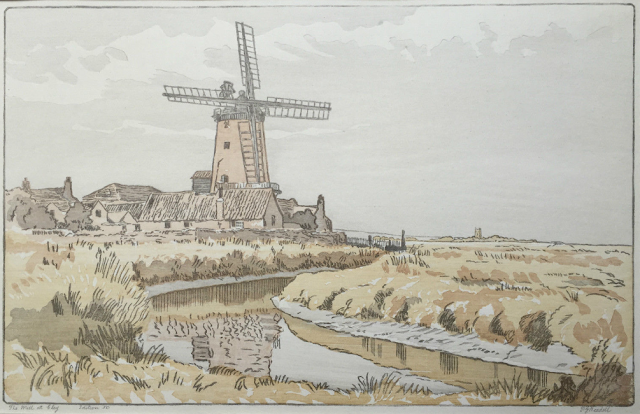 Far more of a surprise for me was the appearance of Phillip Needell's The mill at Cley. I'd never seen this before and was not at all aware that Needell could turn out anything as good as this. It is just as conventional as the Read but unlike Read, Needell understood the conventions of landscape art well enough to come up with this pleasing and delicate image. If it owes quite a lot to French artists like Henri Riviere or Lucien Pissarro, the way he has broken the image down into a series of marks is surprisingly modern for him. We could have done with more of that and less of the mill. It is certainly far more satisfying than E.A. Verpilleux's lurid treatment of the same subject. At £200, it was not a bad buy either and I was expecting it to fetch more. 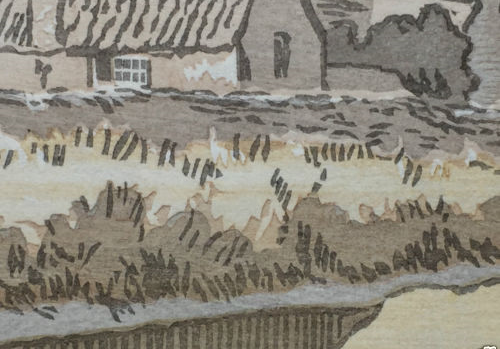 Needell and his wife spent a lot of time in France, especially after his retirement. The sketchy understatement, the delicacy of mood and poetry of space recalls personal favourites like Corot and Seurat and it shows how much an artist who lacked thorough training as Needell did, could nevertheless respond to great artists and make something satisfying of his own. I only wish he has done more like this. Or perhaps he did and we still haven't seen them. 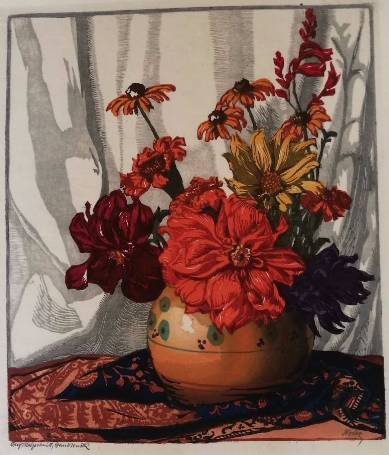 Hugo Noske has never really been on my radar and has never had a post to himself on Modern Printmakers but why this fruity autumnal image remained unsold the other night, is just beyond me. The colour is rich, the description of dahlias, rudbeckia, helenium and montbretia is apt and frisky and it would look better on a wall than either the Read or Needell.  Not evocative enough, I suppose, no real sense of the collectable about it, that would be it. Solid, yes, but all the same, I think it's rather glorious.