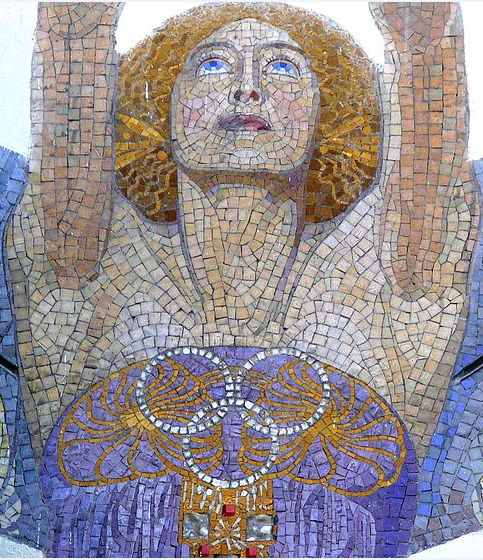 As soon as I read the comment left by Andreas this morning about Oskar Laske, I knew I had a lead for another post. And here it is. But the result is unexpected.

Laske began his professional life as an architect. His father (also Oskar) had been an architect in Czernowitz and young Oskar began training in fine art in Vienna when he was about thirteen before moving to the Technische Hochschule, a leading school of modern architecture and design at the age of eighteen. Six years later, he moved on to the Academy where Otto Wagner was director and then began to practice. It was not to last very long. 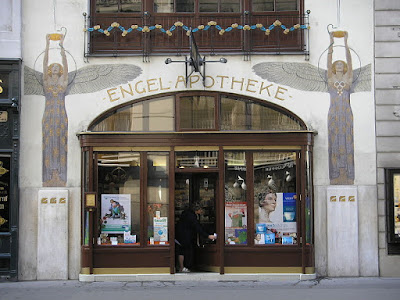 The designs for the White Angel Apothecary at 8, Bognorstrasse, were made soon afterwards between 1901 and 1902. The mosaics he had made for the façade suggest why his career in architecture might have been such a short one. There is something abnormal about his angels; they are too overstated and imaginative for a pharmacy and too much like a pair of dragonflies. 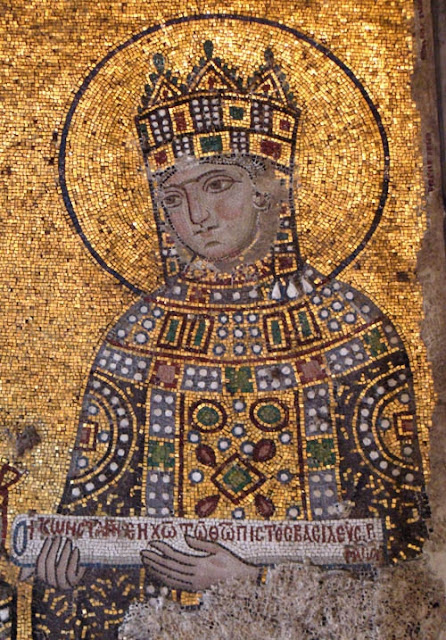 I suggested in the last post they he must have visited Istanbul by about 1910 but the mosaics begin to make me think he had visited while still a student. The C11th image above shows Empress Zoe, the wife of Constantine IX, in what was then the Church of the Holy Wisdom in Constantinople. 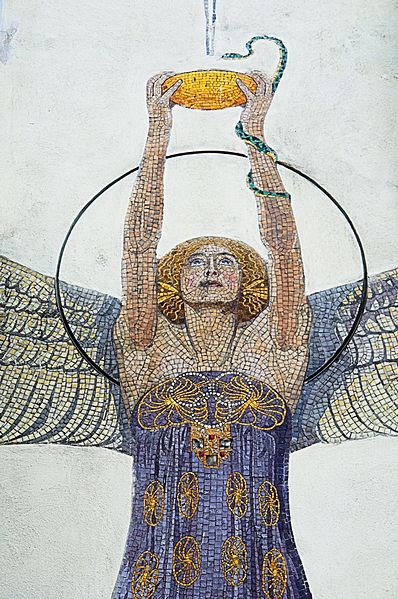 Laske was not the only Viennese artist to make use of mosaic. Gustav Klimt incorporated them into his designs for the Palais Stoclet in Brussels, which was built after Laske's designs had been made. What I do think is Laske responded to mosaic in a way that Klimt did not. Byzantine art remains a kind of  lost aspect of European art, anomalous but one of tremendous craftsmanship and tremendous feeling. 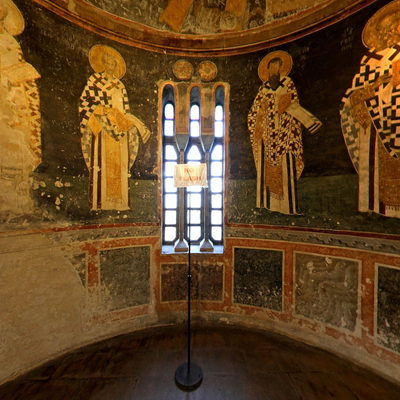 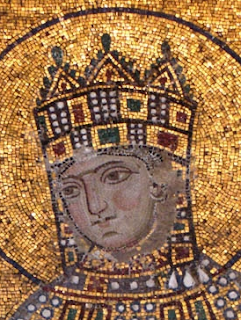 Klimt adapted the old technique with verve and imagination but Laske's paintings owe just as much to the example of mosaic but lead off in an other direction, well away from the impressiveness of the great mosaics of Ravenna and Damascus and others like these marvellous apostles at St Michael in Chora in Istanbul. Andreas also mentioned a trip Laske made with Emma Bormann to Sicily and Tunisia organised by the University of Vienna in 1913. I have to assume again that one good reason for going as far as Sicily was to see the mosaics in Palermo and at Monreale. Here he is as a soldier-artist about three years afterwards. Now have a second look at Zoe's eyes and face. 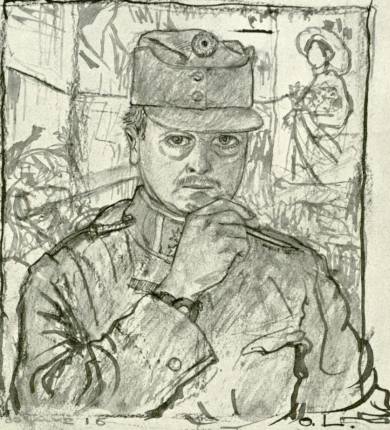 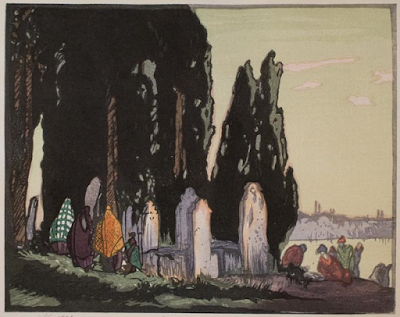 One of the more extraordinary aspects of old Muslim cities is the way they living co-exist with the dead. Cemeteries are a feature of all old towns from Istanbul to Rabat to Cairo. It isn't always obvious because old Jewish cemeteries are sometimes hidden behind walls as they are at Tangier and Marrakech (and they are in Britain) but Christian and Jewish graves are still there. Frank Brangwyn's view of Istanbul from one of the cemetries at Uskudar across the Bosphorus is one of his most affecting prints. It comes from Yoshijiro Urushibara's Ten woodcuts published in 1924 and less than ten years after the defeat inflicted on the allied armies by Ottoman forces on the Gallipoli peninsula early in 1916 after a year of fighting. (The man with the moustache and the field glasses in the photograph below is Mustafa Kemal, later first president of the Turkish Republic, showing the battlefield to a delegation of writers). 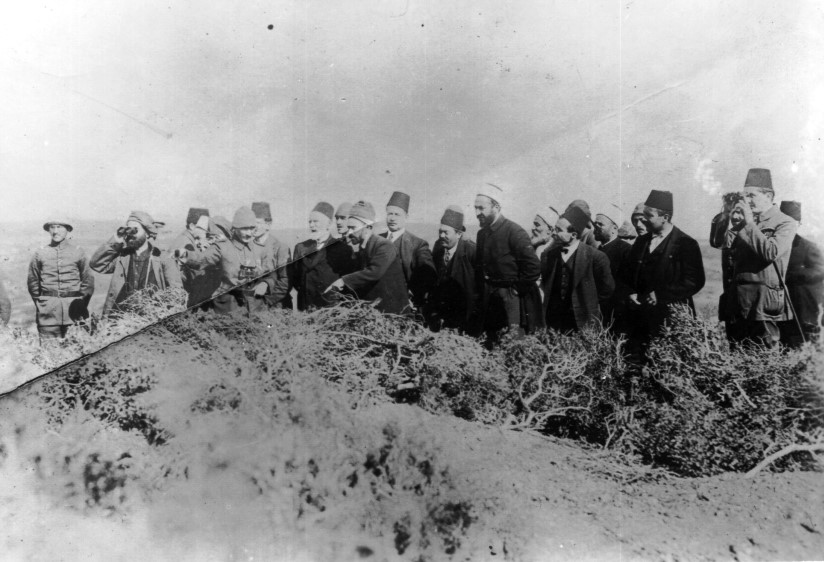 Brangwyn wasn't against the war. One of the eighty propaganda posters he produced so enraged Kaiser Wilhelm, Brangwyn may well have been in danger if Germany and their Ottoman allies had won. What Urushibara's attitude was, I do not know, but he was a nigh-on perfect collaborator with the British artist. Brangwyn could be hackneyed, trite and unsubtle but Urushibara's printing methods often added nuances that were beyond Brangwyn and no more so than here with his sympathetic use of green. 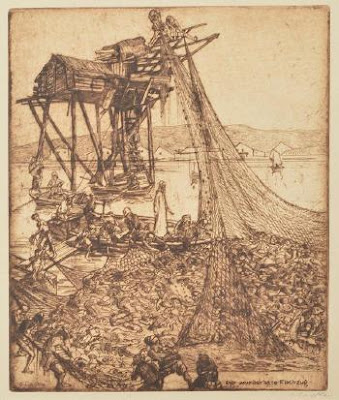 Oskar Laske must have been in Istanbul around about 1910 or before because Der wunderbare Fischzug was made between 1911 and 1914. It may not look like Istanbul or anywhere near there but, although the subject comes from the New testament, the etching shows the kind of tower used by Turkish fishermen along the shore of the Golden Horn and the Bosphorous. This print turned up in excellent condition on British ebay some years ago and the only person who wanted it was me. I can tell you the image above doesn't do Laske's work any justice. I include one of his watercolours of the city. 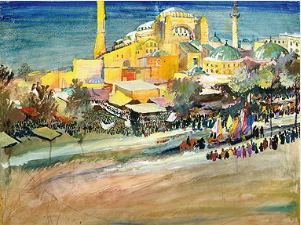 What I like about Emma Bormann's view of Istanbul (below) is the way it avoids the common western depiction of the oriental city as a warren of narrow streets teaming with people. It often is, but that isn't the point! And so far as I'm concerned, the Orient begins at Budapest. And in case you don't believe me, keep in mind the way someone once described Naples: 'The only oriental city without a European quarter'. 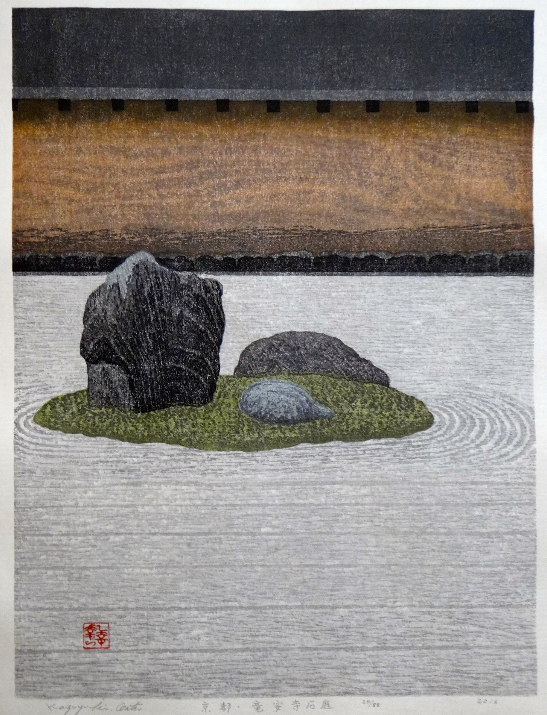 There is just one aspect of Kazuyuki Ohtsu's career as a maker of woodblocks that everyone mentions and it is the long-standing working relationship with Kiyoshi Saito. Ohtsu went to Tokyo at the age of eighteen or nineteen and studied at the Umehara Hanga Studio in Tokyo between 1954 and 1958 and then for the next forty years worked for Saito, an extraordinary enterprise, which I have no information about. 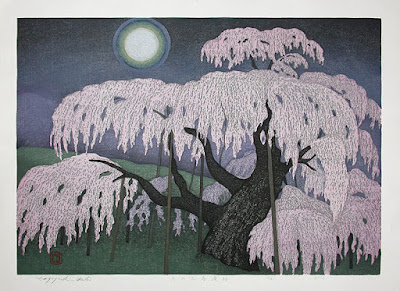 Saito died in 1997 and Ohtsu himself is now eighty-one. It hasn't stopped him making prints of the greatest refinement. Kyoto, Ryoanji stone garden (at the top) was published only this year and all the prints you see here were made over the past ten years or so. Cherry tree at full moon, the woodblock that suggested the title for this post about him, was published only in 2012 and provides the best example of what Japanese artists can do so well. There is no sense here that anything has passed him by, the complexities are handled with unaffected ease, as well they might be, after making prints alongside another artist for so long. But then, this is what his own art is about. 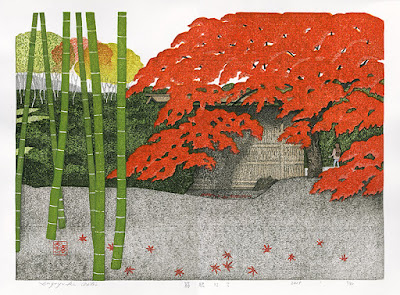 I like some of his prints more than others and have tried to show one or two I might not have chosen. Grey is a perennial in Japan and not just a fashion as it has been in the West, and many of his prints are surprisingly bold. In Hakone from 2006  (above) is something of a halfway house. Even so, it is the understated ones I like most. But they all remind me of a line from the British poet, Edward Thomas, 'and what was hid shall still be hid'. To be hidden behind another artist as long as he was is unusual but looking at the half-enclosed world of In Hakone, I have to conclude it suited his purpose. But then, I think these images speak for themselves. The Japanese are very good at putting you in their shoes and then quietly leaving you alone. 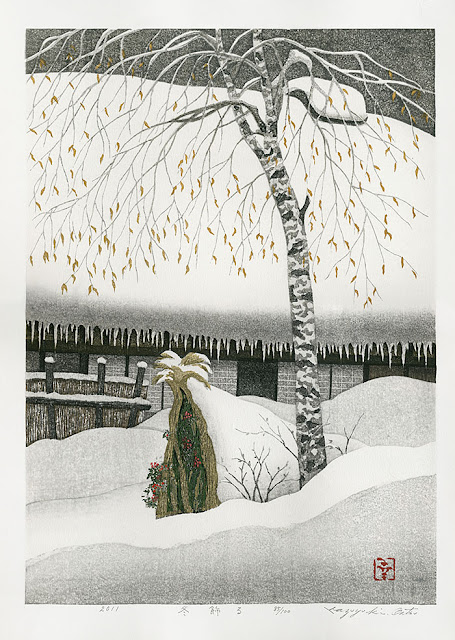