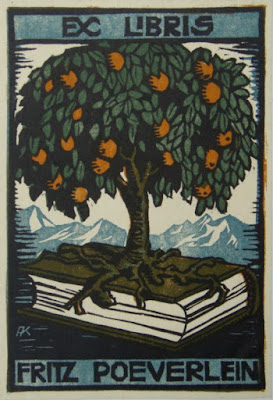 It was the French artist, Theodore Roussel, who re-introduced the British to the special intimacy and pleasure to be derived from small prints when Goupil put on a sensational show of small aquatints in decorative frames he had made himself in 1899. (Roussel lived in Parsons Green in west London). Adolf Kunst was born in Regensburg in Bavaria in 1882 and spent most of his life working as an architect and teacher in Munich. Considering that he died in 1937 at the age of fifty-five, it is surprising how many bookplates he made and how varied they are. The first of them date from about 1910 and, as with so many of the artists featured on Modern Printmakers, there is not much more I can tell you about him. In other respects, Kunst bucks the trend, mainly because he was prolific so his work still isn't rare. In fact, not a week goes by without something else coming up, though admittedly not to the standard of the two bookplates for Fritz Poeverlein and Heinrich Uhl. 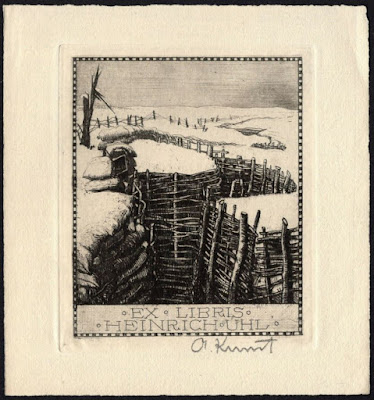 Both plates find Kunst at the top of his game. But what really marks him out, though, was the ability he had to make both relief and intalgio prints. At his best (as he is here) there is a subtle sense of depth beneath the directness and boldness of his images. It is spatial, yes, but it is also cultural. His tree of knowledge suggests the history of reading, the trench the death Heinrich Uhl on the Eastern Front in 1915. A contemporary of Kunst, he was a pupil of Lovis Corinth in Berlin. The bookplate Kunst made for him extends the way we think about them. At best, they are referential, appreciative and literary. Kunst's bookplates can have a sense of history and of life. 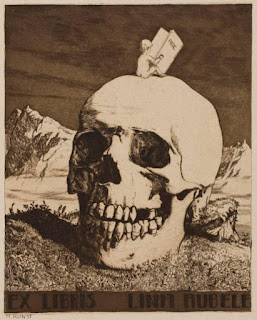 The Heinrich Uhl bookplate came up only a few weeks ago and was the cause of some determined bidding, which took it to £162. The book-bee was also for sale recently - and I regret letting it pass me by Like all the best of them, Kunst takes one idea and creates one image. But within that basic format, he has a greater range both it terms of colour and technique than most makers of ex libris. The etched landscapes are perhaps the least successful and the simpler colour images can be negligible - but then that is true of thousands of other bookplates too. 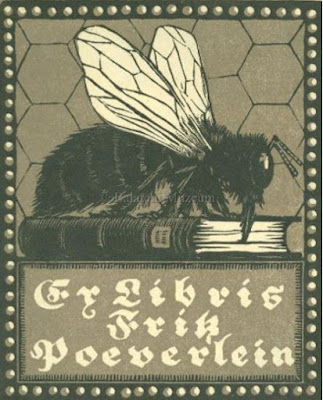 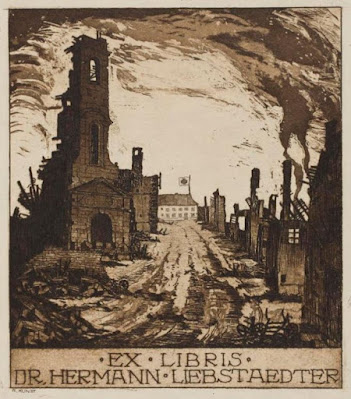 But even there is it often hard to know the difference between linocut and woodcut. Because I own a proof of Ex libris Tilly Stock, I can see it must be lino because of the fine tissue he used. But even without having the plate in front of you, the effectiveness of the dead whitish paper of Ex libris Heinrich Uhl is apparent. These may be small things, but they are works of art where even paper and ink play a part. Some of the best bookplate are deceptively simple. What marks them out is the sensibility they express. 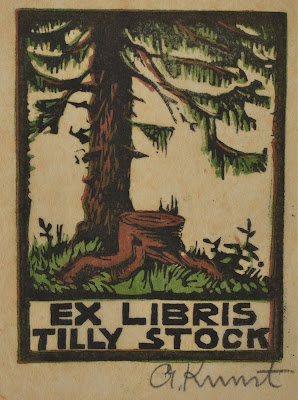 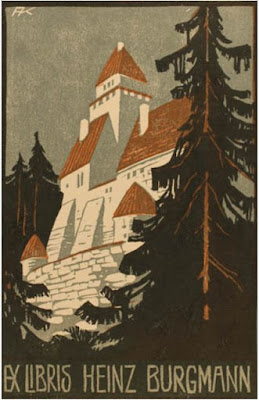 See the index for the previous post about Adolf Kunst's work. There are different images.
Posted by Haji baba at 08:09 No comments: