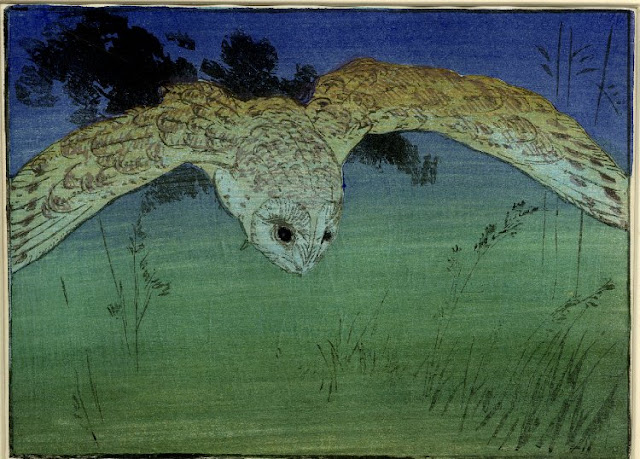 A number of colour woodcut artists have attempted to use the same block to suggest either a different time of day or a fresh view of the subject. In the early days of woodcut in Britain, Sidney Lee commonly used the same woodcut using different colours to express day, night etc. It hardly ever works partly because the differences just aren't obvious enough. Ethel Kirkpatrick was less of an offender but took the opposite approach to Lee and tried to bring up stark and frankly unconvincing contrasts. 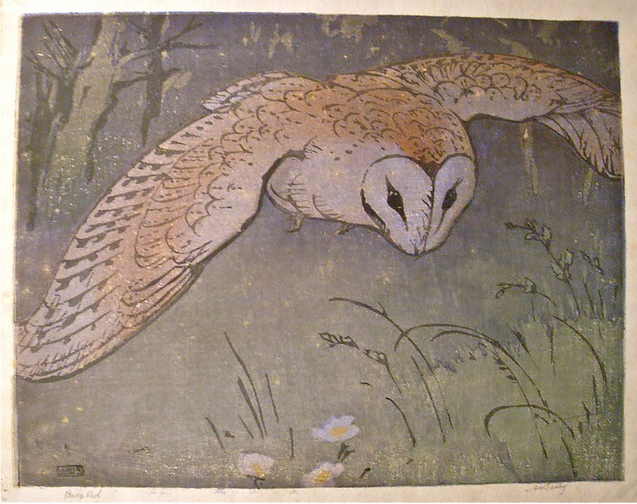 Seaby liked birds in the way Kirkpatrick liked boats. He also had his favourites - kingfishers, for instance. These owl prints are fairly similar and probably both belong to early in his career. But the atmosphere of the prints is quite different. The second uses representational colours more than the first and both adopt the standard Seaby approach of precise images against an impressionistic background. We are so used to this by now, we probably fail to see how innovative Seaby was. So many early C20th British painters went in for these impressions but Seaby had the sense of the naturalist to describe the bird and suggest its habitat. This remained a standard approach in birds books for many years. 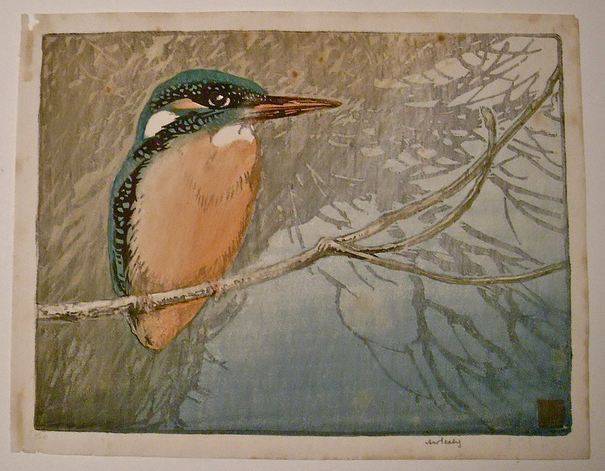 But what is most apparent to me that given a choice betwen either owl or either kingfisher, I am not at all sure which one I would buy. This tells me how successful he was. The block of the kingfisher is the same one but the images are tellingly different. His sense of colour shifts the atmosphere cosiderably but there is an element we will never be able to see for ourselves: Seaby applying those colours with his brush. It is the subtle effects he achieved by the methpod that make the difference.
Posted by Haji baba at 18:31 4 comments: 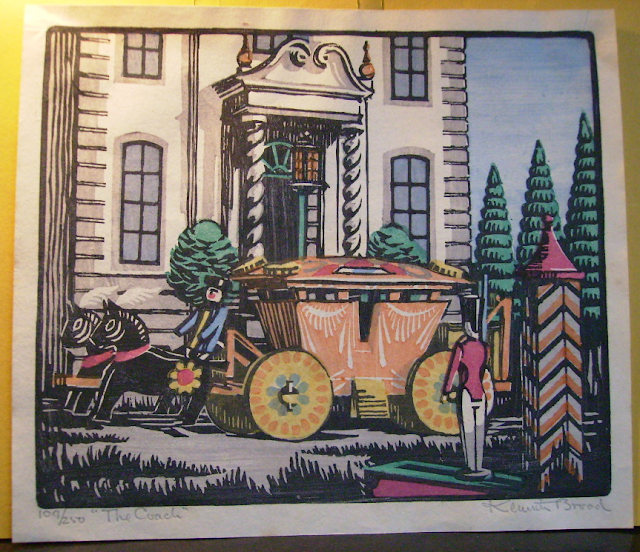 Just up on British ebay one of those prints that make me fully realise just by how much we have been engineers of our own downfall: it is Kenneth Broad's nursery piece 'The coach' at a quite extraordinary starting bid of £500.

This of course is not serious as a price but does give you an idea how much the print blogs have managed to give sellers on ebay the wrong idea. I remember Clive who used to run Art and the Aesthete buying this print and its partner 'The gardener and the lady' a few years back for something like £60 or £70 (but perhaps it was less). That said this looks in pretty good condition and as the seller quite rightly says the colours are remarkably fresh and bright.

Anyway, in case anyone things my primary motive is to give ebay dealers more stick, this time it isn't. I just thought readers ought to see what is a good photo of a nice print - and of course gasp at the chutzpah. And in case anyone is wondering, I will be back to posting more regularly once my new ISP deal comes through around 1st May. My current one has been costing me the earth. Perhaps I should flog Broad's A Sussex Farm on ebay. Anyone like to make an offer? Say £1,000?
Posted by Haji baba at 20:53 13 comments: