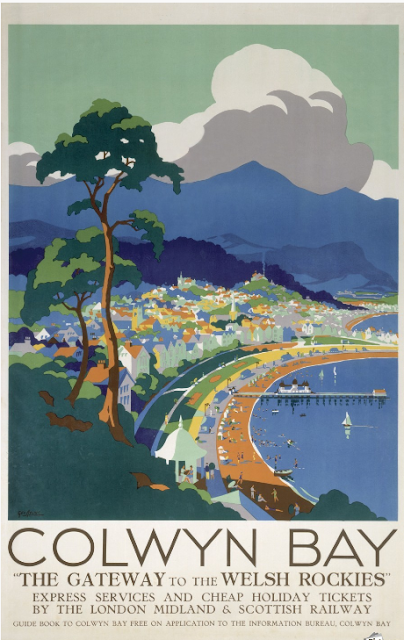 Modern Printmakers will be on holiday from today for a week, so there  may  be a delay to replying to comments. Please leave them all the same for other readers. 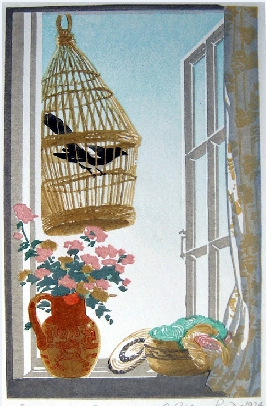 In 1934 a friend of Arthur Rigden Read gave fifteen of his colour woodcuts to Hastings Art Gallery and I assume the fifteen colour woodcuts form the basis for the current exhibition at Hastings, but which also includes work by Urushibara, John Platt,  Eric Slater and Frank Morley Fletcher, an interesting mix of colour woodcut artists who all  made use of the Japanese method, hence the title of the exhibition. 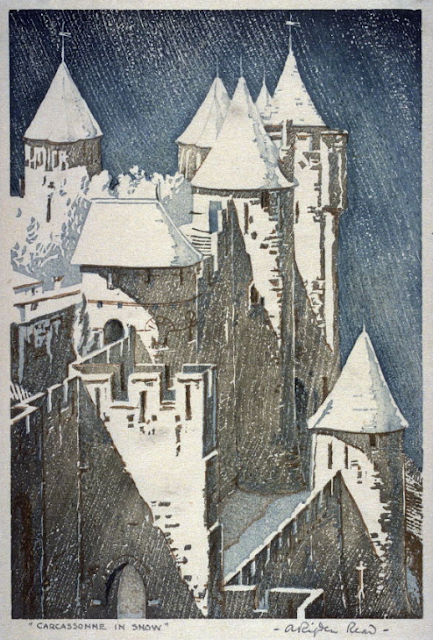 Eric Slater was nowhere near as good a printmaker as Read, but he will help to bring in the crowds. It would be fair to say they formed a local school of sorts in the late twenties and thirties, but the Reads lived in Sussex for twenty years only and many of his subjects were French or Londoners or people like the Romanies who came from nowhere, so it's a shame curators try to give a minor artist this duff local slant. Read may be minor but he deserves better. As does his wife, who appears in a number of his woodcuts. 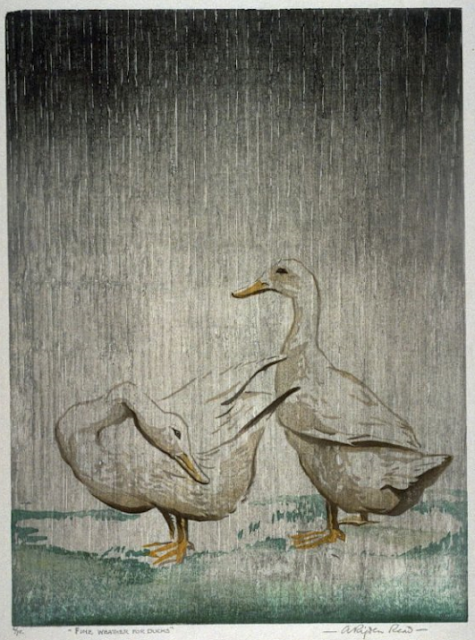 The show runs from 27th May to 3rd September and will appeal to the summer crowds as well as local cognoscenti. It will be worth going simply because I know that the bequest includes a number of prints that are rare enough to be unavailable anywhere online. Certainly I have never seen  some of them, but they have not been included in the booklet that has been published to coincide with the exhibition. But the less said about that little effort the better.
Posted by Haji baba at 19:53 2 comments: 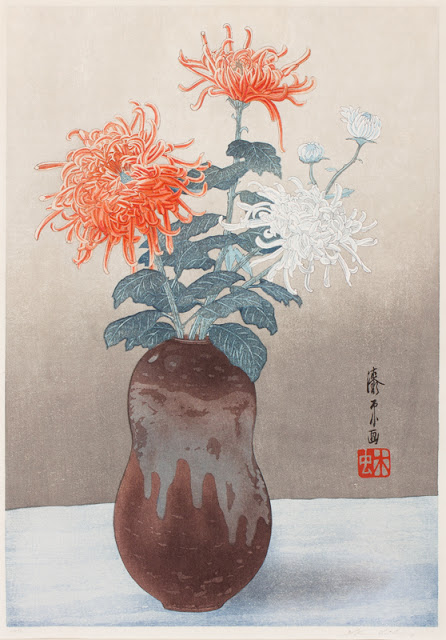 The problem with quite a few people who write about art is that they do not know how to look at pictures and they do not know how to look at pictures, because they have not looked at enough of them and do not know their  Manet from their Mategna. This may not always matter all that much, but in the case of the subject of this book, he was not only Japanese, he had been trained to work in the style of other artists, and then worked with many artists in France and Britain and no-one is more nuanced than Yoshijiro Urushibara. Ignore this at your peril. Unfortunately, the authors do. 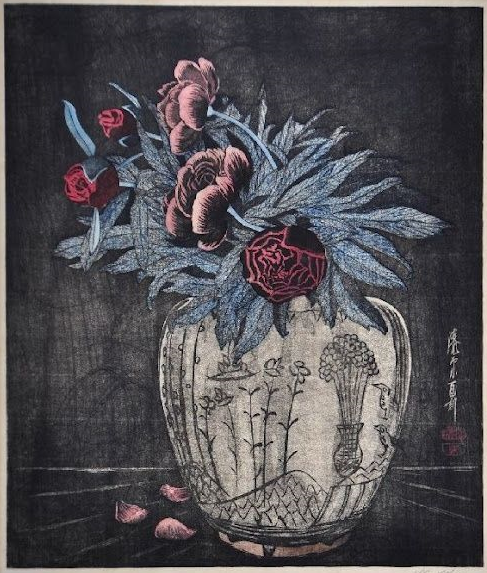 But there is more. It is imperative, if you want to study any artist properly, to have a chronology of their work and, basically, a catalogue like this ought to do the job. What is lacking with Urishibara is an adequate number of dates for many of his prints and no amount of other detail can make this book do what it says it does. In that case, why did they try? And the answer is, 'Because they wanted to'. 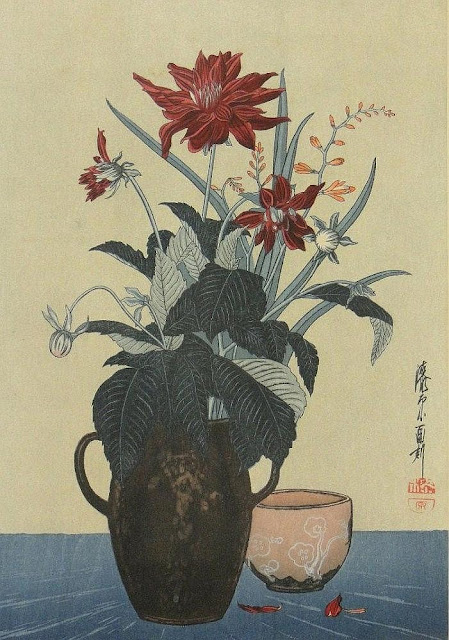 They are not the only writers to divide a catalogue into rather naff sections like 'Florals' and 'Creatures'; Dominique Vasseur inflicted the same indignity on poor Edna Boies Hopkins in 2007, but what else could they do?  The predicament was a predicament of their own making, but producing a catalogue is one way of avoiding too many critical judgements, except of the very obvious sort. All we get is Chapman saying she believed the work he did with Brangwyn was his best. She doesn't explain why, so I needn't say why I disagree (although I think earlier work like 'Ruins of a Roman Bridge' are very good): what you see here is what he did best. 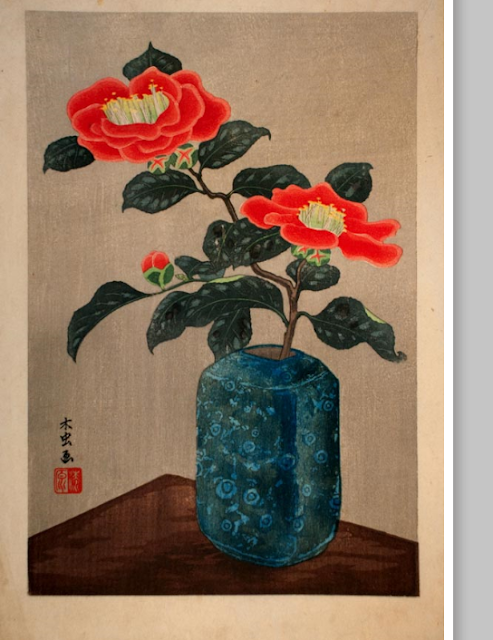 Obviously, not only these; there are others, but I have written about Urushibara's prints elsewhere on Modern Printmakers. Libby Horners' essay on the artist is very good and well-researched though some material is still missing. Hilary Chapman's essay 'Urushibara and the British colour woodcut in the Japanese manner' is thirty years out-of-date and counting. Why bother? 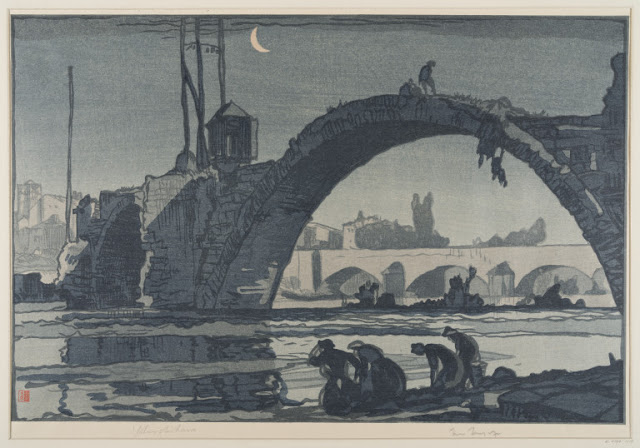 One criticism that has been made about  this book concerns the size of the illustrations. The standard of photography is good and I would say that everything you want to see is there, along with a lot of things you would not want to, minor work after Frank Brangwyn being my own bugbear. It's the same with the text in the main catalogue, which has you wading through details  about exhibitions and incomprehensible lettering. If you enjoy flipping backwards and forwards, this may well be the book for you. This is a missed opportunity to do Urushibara justice. The authors only had to look at Robert Meyrick's 'Sydney Lee' of 2013 to see how this new book should have been done, but  this is all we have and I am afraid Chapman & Horler will be the standard text, whether we like it or not. 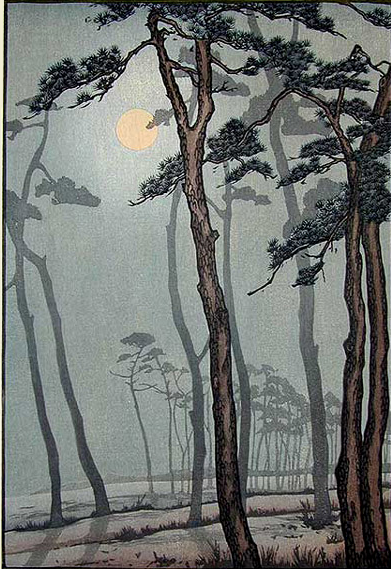 For a different view of the book, read Darrel Karl's insider take on things on 'Eastern Impressions'
Posted by Haji baba at 20:05 11 comments: 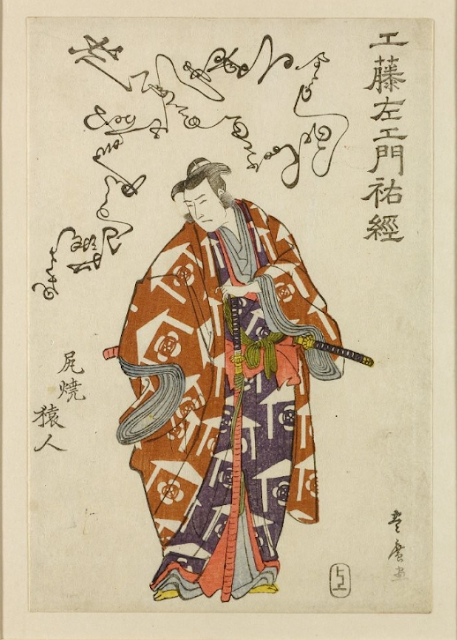 As it is Urushibara week, I offer this post on the scholar and dealer, Ken Hoshino, as my contribution. Hoshino was born in Japan but  left in 1898 to study at Columbia University in  New York City. Following graduation, he then moved to London where he eventually set up a business selling prints on Chancery Lane. 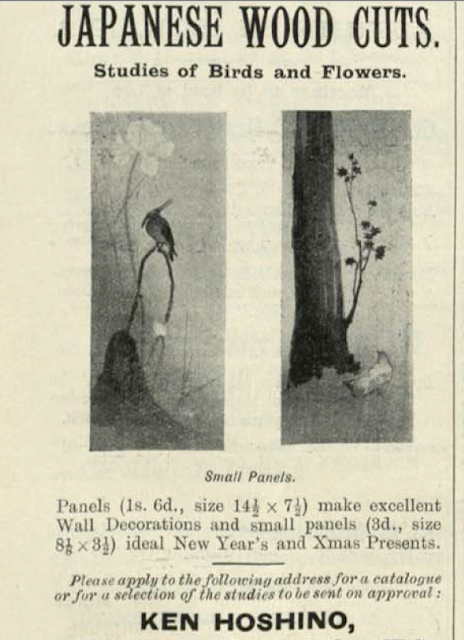 He was in business by 1907 when he sold 23 images to the British Museum. The woodblock by Utagawa Yotohiro (top) was one of them and the image of fighting during the Sino-Japanese War by Gessa  c1904  (below) was another. In between them  there is a 1912 advert from the Froebel Society Journal for the popular bird and flower prints. (I await identification  and I am not  going to put much money on Koson). 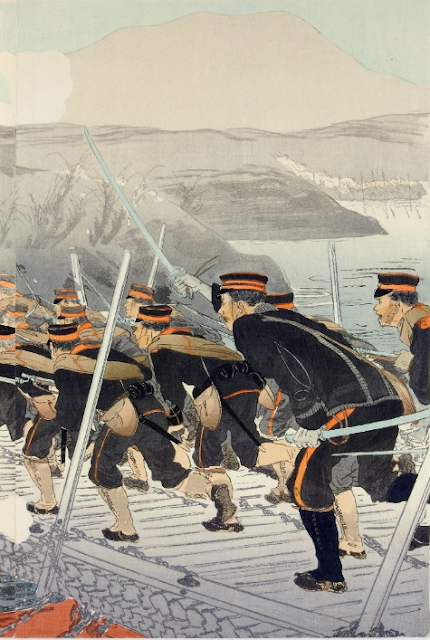 Hoshino's London career came to an end shortly afterwards. He fell ill and returned to Japan, leaving the business in the hands of a British employee who ran it until the end of the first war, when Ken's nephew, Hiroshi, came to London and instead of selling prints, imported Japanese celluloid toys, which were passed on to East London traders at considerable profit. Such is life. 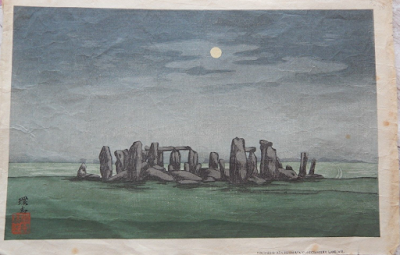 It was this later period that is perhaps of most interest to Modern Printmakers. In 1910, William Giles produced a colour print of Stonehenge (below) based on a series of drawings he had made and in its turn, this became the basis for a colour woodcut by Urushibara, or, rather, a series of colour woodcuts where the Japanese artist built on the variants Giles himself had made. The whole process for Giles had been a complex one of selection where many of the esoteric overtones of the sketches and etchings he made, were removed. 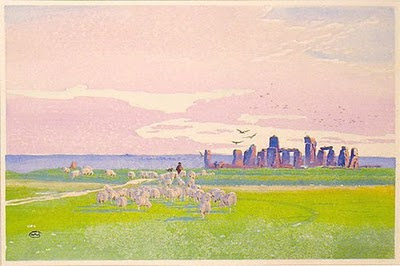 Urushibara's images were made some time around 1912 or so. Many are signed and are quite clearly colour woodcuts, but at some point at least two different images were published by Ken Hoshino and Co. According to the Japanese Gallery the Hoshino Stonehenge print they had for sale was a lithograph. It had a chop-mark like the one you see here and an inscription (see below)  but no signature.  I have never seen one of these Hoshino prints, so I am  not going to go in for any guesswork or conjecture. It's  interesting all the same to see Urushibara taking a commercial approach (as his old employers did in Tokyo) at a stage where he was beginning to make prints of his own. It was not untill 1920 that The bamboo vase, his first truly independent colour woodcut, was first exhibited in London. It was a long apprenticeship but there is a process here, I think, and an acute one. 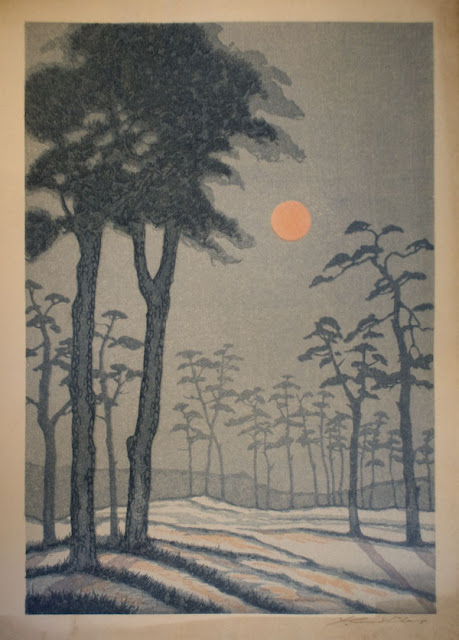 It was in the nature of things, I suppose, that  Yoshijiro Urushibara went to live somewhere on the boundaries of Holland Park and Notting  Hill  (according to which source you go to) when he first came to live in London. Never an easy printmaker to get  quite right, the first attempt to locate this intriguing artisan-printmaker, teacher and friend has been made by Hilary Chapman and Libby Horner in this book published in  May, 2017. It is essentially a catalogue of his prints and includes essays and other biographical material. 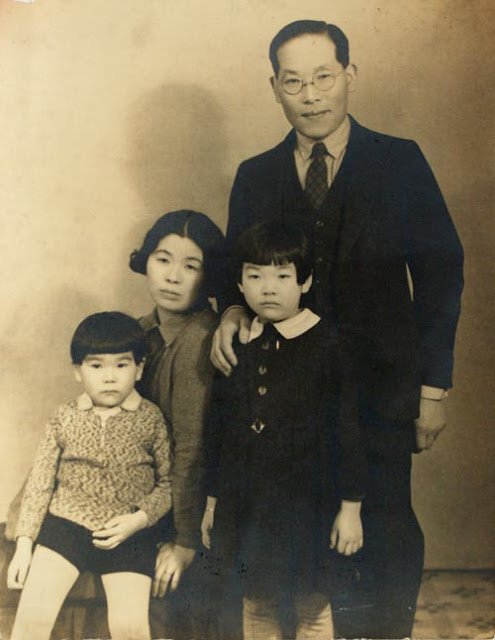 My thanks are due to Darrel Karl who alerted me to the publication on his blog and who  helped the authors with his considerable expertise. (The link is on my list). I will be reviewing the book once my copy arrives. 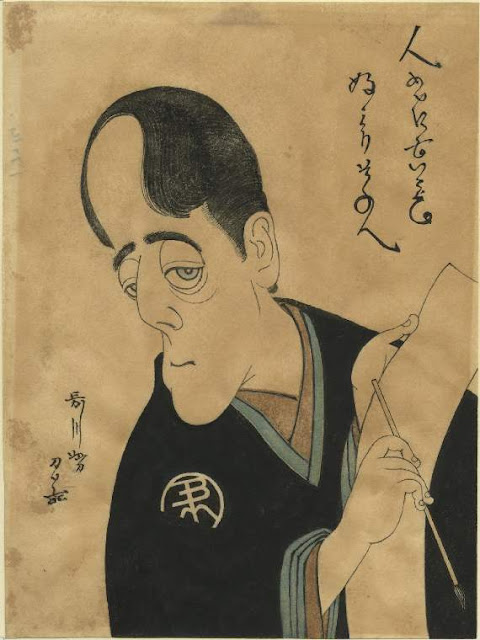