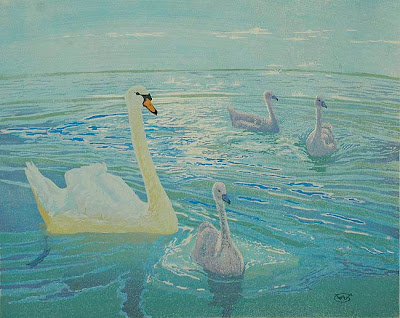 There was a comment from a reader in Colorado today with one of those wonderful good-luck stories about a picture he inherited from his great aunt. She was born in Hungary and when she died about twenty years ago, they had the picture and took it to the framer's who rang back to say he had found another image hidden underneath: Carl Thiemann's Schwane, (below) from about 1916. Why you would want to hide something like that, I don't know, but my reader now has the Thiemann on the wall. 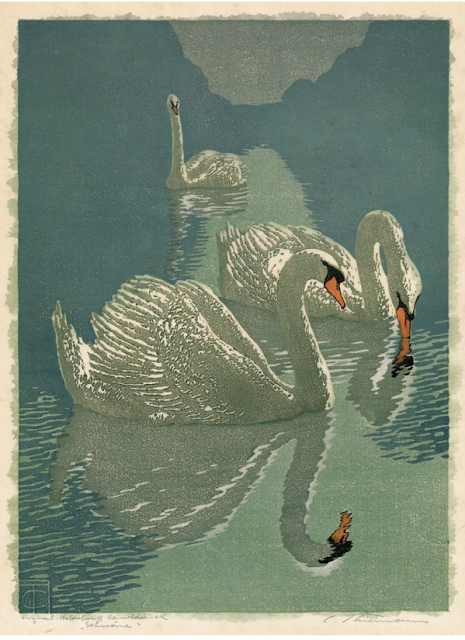 I'd not really thought too much about the preponderance of swans amongst some colour woodcuts artists at the time and I will leave it you to decide what loans were being made, but William Giles and his wife Ada Shrimpton spent weeks in a punt on the river Thames sketching for his glorious woodcut Swans and cygnets (top) which dates from 1911. 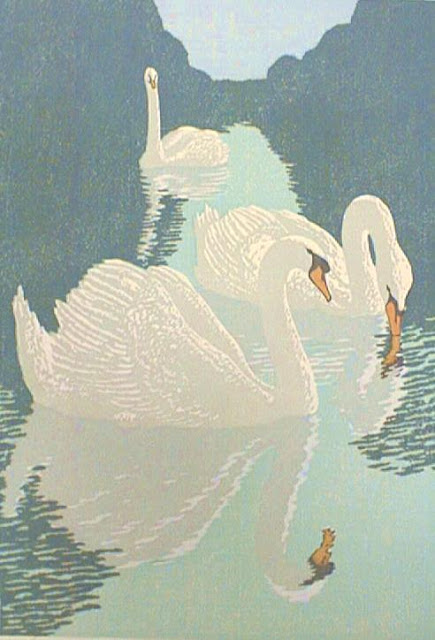 I assume from the description he gives, my reader owns the print you see below the Giles. True to form, Thiemann, when he had made a successful print, went in for other versions, like this one, above. I am taking my German dates from Per Amann's 'Woodcuts', 1989, and according to him, Hans Neumann made the next woodcutn you see, Swans on a lake, at evening (below) in 1914, roughly two years before Thiemann. 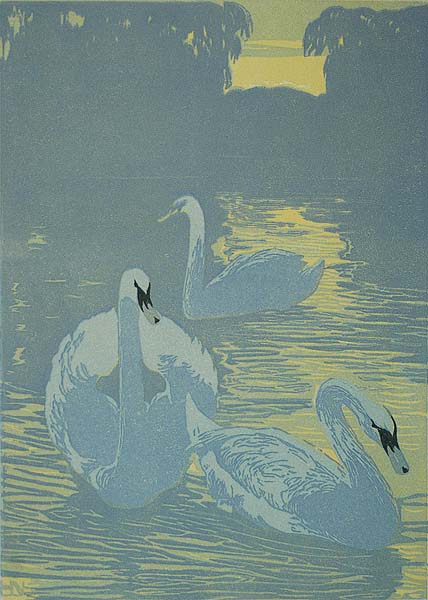 To add a further twist to what is already a complicated little story, Neumann approached the subject once more with what looks to me like a post-war print (below), the overhanging branches being suspiciously like the ones in, yes, Giles' celebrated Haunt of the jay, the moral being, you have to know a good thing when you see one. I suspect Neumann intended to make another image quite different to Thiemann's. I think it's preferable to his first. 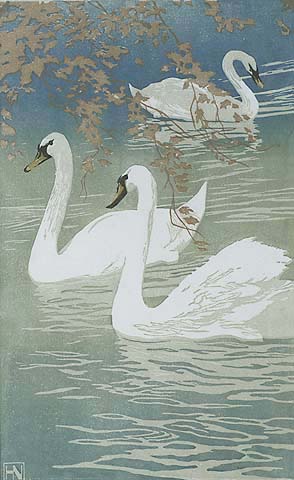 And if you must know which one I prefer, I think my reader owns something good. I think the tones of the second Neumann are great, especially the white of the swans, despite the drawing being more conventional. The Giles is marvellous and his observation is acute, but Thiemann had that knack of concentrating his efforts into a memorable image. But I think  you would need to see them before deciding, and my hunch is the Giles would win out with his quite superb printing technique, a story, believe me, in itself.  Some of these prints are for sale at Paramour Fine Arts and at William P Carl Fine Art, and my thanks to them. The Giles is by far the most costly. 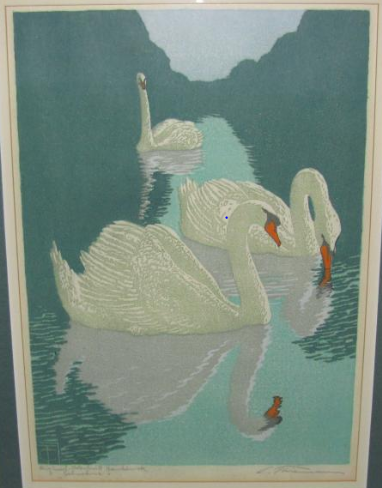 And there I was, thinking to myself, I should think someone will now send in yet another version of Thiemann's Schwane  only to find that my reader's version is different from the first two I have posted. So, here it is, and thanks to Mike for starting off one more Thiemann post. Where will it end?