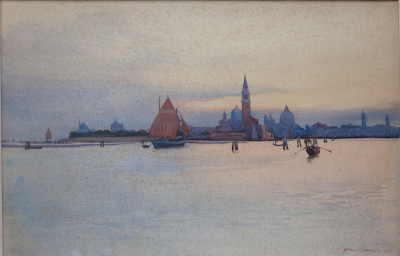 It takes an artist who knows what they want to do to go on returning to a view of the same small, island. Not any island, I have to admit, but the extraordinary Isola San Giorgio Maggiore at Venice as seen here by Ethel Kirkpatrick in 1898. 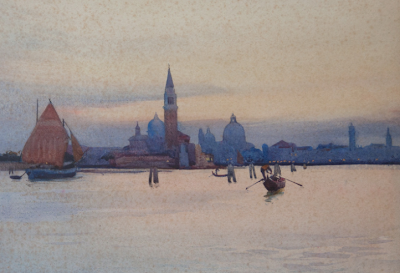 It was at that time she began to first make colour woodcuts, but she had already been painting and exhibiting watercolours like this one for at least four years. But what we have seen untill now are the watercolours painted in the west of Cornwall, even though she and her sister Ida went on various sketching trips in southern England and beyond. What we have seen so far may only be a matter of what has turned up, so I am very grateful to the reader who sent in this unusual view of the island with the domes of Santa Maria della Salute at the entrance to the Grand Canal just to the right.

It shows San Giorgio from the west, possibly from the Giardini Pubblicci, or from a boat. Almost all the views of the island you find tend to emphasise its isolation, but Kirkpatrick takes a viewpoint that recalls Istanbul seen across the Golden Horn.


The restricted palette of blues and reds is telling. Here is an artist who was about to embark on a career making colour woodcut, and it shows just how much that medium would suit her style.  Early morning, Venice (above)  involves another view of the island, with the campanile apparently missing. It was made years later, when the topography of the city was of less interest to her than the nature of its light. But watercolour gave her the opportunity to create a panorama with a real sense of depth that colour woodcut does less well.


By the time she came to make Evening, Venice  (above) in 1913, I think she was on the top of her form and it just shows what expressive freedom she had gained when she came to colour woodcut. It has her taking yet another view of Isola San Giorgio, probably from St Mark's Square this time, and it is fascinating to see her looking at the same subject in three such different ways. So, many thanks to Kia for sending the watercolour in today. We now know more about Kirkpatrick than we did on Tuesday.