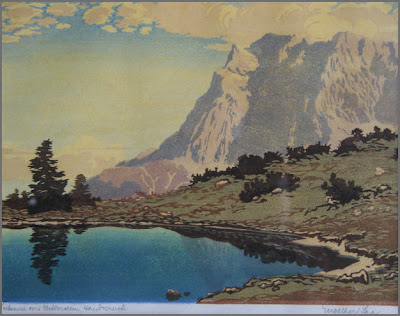 A few years ago someone I know put me onto a shop on West Street in Sheffield. It was the kind of place that had a happy mix of second-hand books and C20th century paintings and prints, the kind of place that had a well-selected stock that appealed to a bookish crowd, the kind of place that time has tidied away. That particular afternoon I stopped to look in the window where I saw the colour woodcut you can see above. Or, at least, not that woodcut but one with a different set of colours. I went in; it was £110. I didn't hesitate. Neither the owner of the shop, nor I, had any idea who it was by or where it was from. But it was, of course, the Austrian printmaker, Engelbert Lap (1886 - 1970). And it was love at first sight. 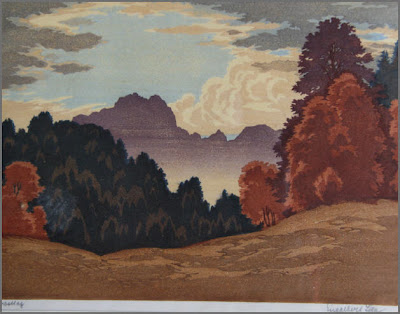 As it happens, I now prefer the blues and greens of the one you can see to the browns and blues and golds of the one I own. And this says more than enough about the Engelbert Lap who was destined from an early age to join the Austrian army. From a military secondary school, he went on to the Theresian Military Academy in Vienna then joined the Tyrolean Kaiserjaeger as a lieutenant in 1907. He fought on the Galician and Dolomites fronts during the first war, retiring in 1923. 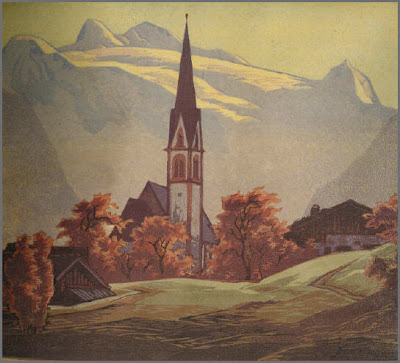 Being an artist in post-war Austria probably wouldn't have been the easiest way of making a living unless you had married an aristocrat like Norbertine von Bresslern Roth. Carl Rotky was a doctor; Emma Schlangenhausen painted frescoes; Emma Bormann had her academic job; Lap had his army pension but, so far as I can see, no training whatsoever as a professional artist. This is what makes the immaculate printing of the work I have propped up on a chair beside me so remarkable. Much less remarkable is the drawing of the church in the print above. It's insipid. You only have to compare Siccard Redl's unforgettable little woodcut of a chapel in the Tyrol (see Jospehine Siccard Redl: lost images of a lost province, February, 2011) and the way she integrates the building into the style of the picture to understand Lap's limitations and weaknesses - and the way he understood his strengths. 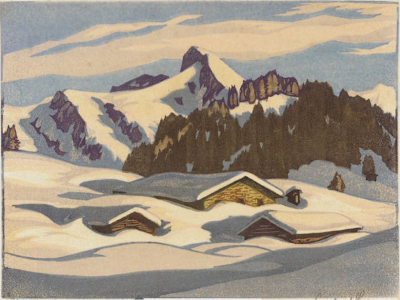 There are two points I want to make here: it was necessary for him to make a living and he obviously wished to do a good job. He had started off as a watercolour painter and progressed to woodcut. The days of the Secession, with its enthusiams and rejection of specialisms, were long gone. Unlike Carl Moll who had been painting away merrily for years untill he took it into his head to make a few faintly peculiar woodcuts around 1905, once Lap had hit on colour woodcuts, he stayed with them. Truth to nature? Plein air? Do me a favour. He could change the colourways of a print as it suited him, as he had done with mine, without concerning himself with the actual shade of either the mountains or the sky. This is about as far from the approach taken by Ethel Kirkpatrick as you can get. 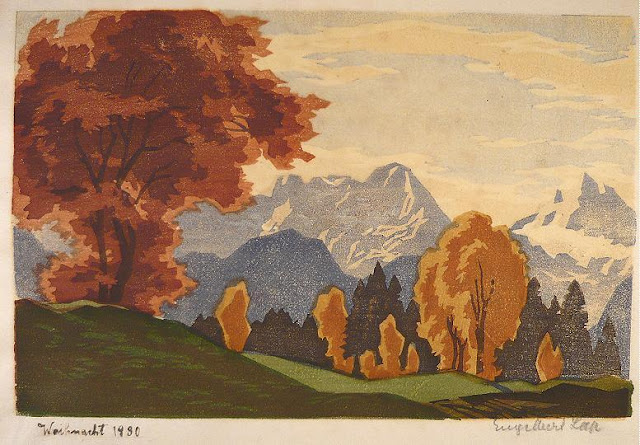 As I said at the start, Lap has immediate appeal. The fact that this wears off once you have seen dozens of them is by the by. The work of artists like Emil Orlik, Emma Bormann and Walther Klemm that appeals to the mind as well as the eye, was by the kind of people who could go off and get secure jobs in universities. Decorative printmakers like Carl Thiemann, Hans Frank and Lap had no other option but to try and make sure their works sold. This is exactly why I found his work such a long way from the Tyrol. Try finding a Bormann or an Orlik in Yorkshire. I don't think you ever will. 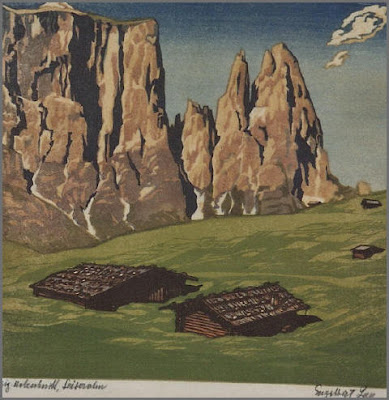 He made prints of the farm below from all angles! Some prints look as if they have just been reversed. The same range of peaks appears in one woodcut after another. Sometimes these alpine farms are buried in snow, sometimes they are just buried. You have to admire his chutzpah. And this is exactly the approach that appeals to certain collectors. The variations, once you start to notice them, become a sort a game that makes you feel quite clever. All the same, every collection needs to have one. I can guarantee the pleasure; I cannot guarantee the price. 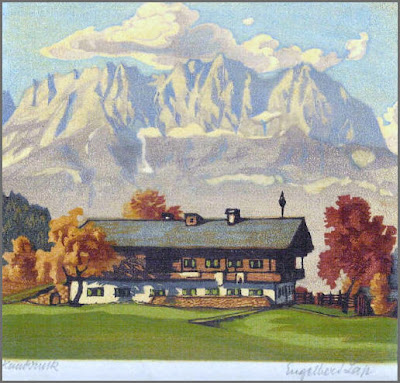