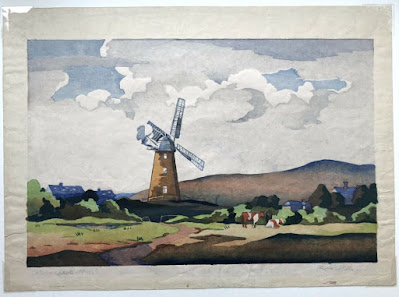 Christmas tends to bring out the colour prints on ebay and Eric Slater's A downland mill has to come out of the sack first simply because it is going to cost so much. I know I am not going to please everyone by saying what I think about Slater, but that isn't what blogs are for. I understand what his appeal is but he is seriously overpriced and always has been. One of the reasons is that he became popular almost as soon as he began exhibiting in 1927, the prints sold well and there are enough of them around for dealers to offer them for sale now and for prices to keep on going up.

This one is already over £800 and with four days left and Santa on the way, it will probably go for even more. I can't exactly say why this should be, but if you look at the image, to appears to be laid down, something that always put me off.

A downland mill was first exhibited in 1934 so comes in the middle of his career as a colour woodcut artist. The idea of depicting mills and Martello towers came from George Graham who had a house built at Winchelsea Beach around the time Slater moved into Alards in Winchelsea. I mean some of them are OK, but  by 1934 he had overdone windmills and other  his other colour woodcuts made around the time were better. As usual, the muted colour and shadows are likeable, but the image is not only static, it is weak.  In particular, the unattractive line of keyblock on the left hand side of the mill suggests how simple his approach could be. 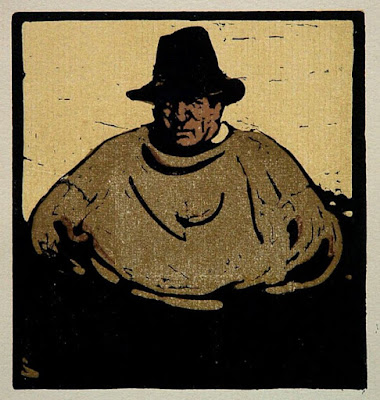 William Nicholson's A fisherman has been hanging around for some while. Published in The dome in 1897, it was only the second of Nicholson's colour woodcuts and the only one to be printed directly from blocks that had been inked. All the rest were coloured by hand. The on you see here is not the image offered for same on ebay. This one comes from  Annex Galleries website. I am also not at all certain about what its status is as a print. I have seen some images that are signed which may mean that Nicholson printed them himself. All the other unsigned prints I assume first appeared in The Dome. I should also add that none of Nicholson's prints are true woodcuts. All of the were cut on end-grain on box. Nicholson only adapted the style of old hap books because he had come across some blocks in Ridges bookshop in Newark in Nottinghamshire where he had been brought up. 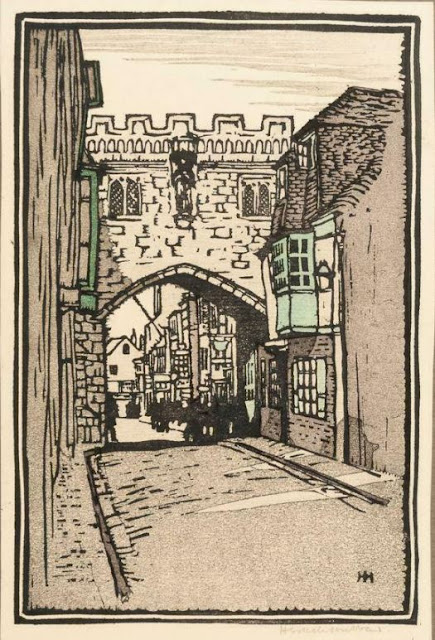 For any fans of Eric Hesketh Hubbard, here is the chance to buy his portfolio The gateways of Salisbury Cathedral Close printed at his own Forest Press and published in three editions in 1925. It is made up of five prints, mainly in sepia tones, but with the addition of some light green. I think one edition was printed on the press, the other two by hand and with the most expensive being on japan. I  cannot say for sure which one this is but almost certainly not the one printed on the press.

Hesketh Hubbard founded the Forest Press in an old shed on the common at Breamore near Salisbury in 1923 and wound it up only six years later. I know of thirteen colour woodcuts made during that time. I gave one of elms trees to my mother and she liked it a lot. I don't what happened to it and I have never seen it on the internet either. None made use of the Japanese manner and some of the ones are tougher paper are a bit crude. That said, many of them are interesting and some of them dramatic, but I wouldn't call them fine prints. Hubbard was in fact an accomplished professional artist and entrepreneur and the small group of woodcuts he made are not all that typical of his best work. But there you are. This is a quirky period piece. I have seen the complete portfolio for sale before but you would meed to be an enthusiast to buy it I would say. 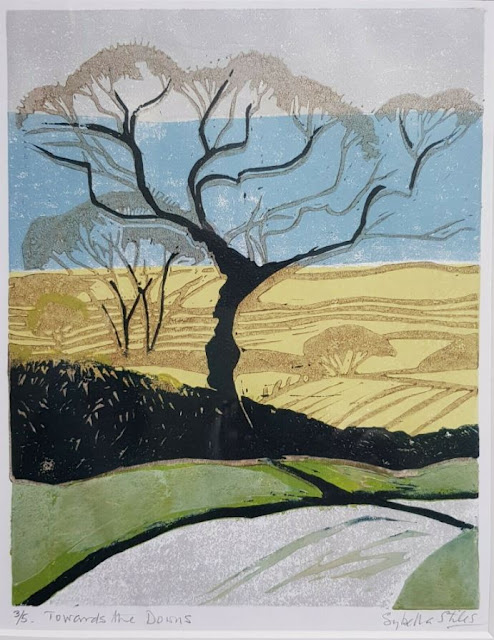 Last but not least is Towards he downs, a colour linocut by Sybella Stiles. It's OK, I suppose, but not stylish enough to set the heart racing. I don't know much about her but she made various prints, including wood-engravings. It all depends what it goes for.