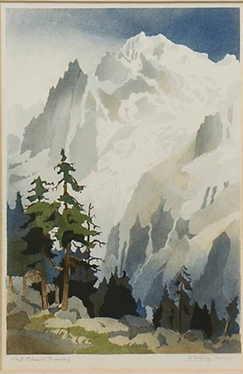 No-one could blame James Alphege Brewer for the war. It was bad luck that he began to make these colour woodcuts only a year or so before it began. Then, when it was over, this kind of art was not only out-of-fashion in Britain, it was derided, and soon forgotten, lost under a great surge of  abstraction no-one understood, least of all the artists. Some were able to adapt. Edward Bawden had used linocut before the war to produce designs for wallpaper, but after the war followed the modern trend and made big-scale colour linocuts. Others could not. 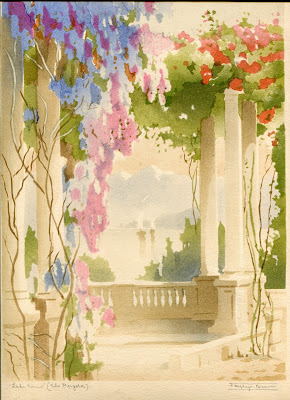 Brewer was one of the very last British artists to make colour woodcuts. They first appeared at the Society of Graphic Art exhibition in 1939 and presumably he had begun to make them some time before. Colour woodcuts are by no mean easy to produce but there is no sense of the beginner in the earliest ones like Mont Blanc or On the Dochart, Perthshire. This presents a problem in itself. Brewer was self-evidently a professional printmaker. For most of his career, Brewer's stock-in-trade had been colour etchings of architectural subjects and most of  his recorded prints were made after his marriage to Florence Lucas. Her great uncle, David, had been a mezzotint engraver who had worked with John Constable on English landscape untill Constable's death in 1832 and after that with Constable's family to 1840. Lucas himself died in Fulham Poorhouse in 1881, but as an apprentice under S.W. Reynolds he had joined a distinguished line of  English engravers that went back to the great mezzotint tradition of the C18th. Continuing that tradtion in the family may be one reason why Brewer entered into a collaboration with his wife's brothers, George and Edwin Lucas. 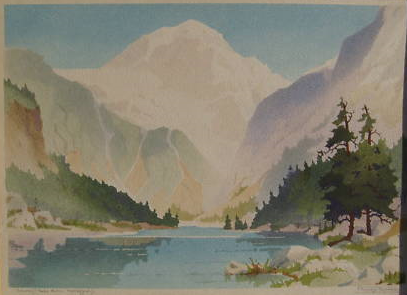 At the the time Brewer began to work on his colour etchings, many British colour etchers exhibited with the Society of Graver-Printers in Colour. They accepted a degree of collaboration on original prints, but the kind of work Brewer was doing with the Lucas brothers was too close to the old school of reproductive etching and engraving. (John Hall Thorpe who had trained as a reproductive wood-engraver in Sydney and who could not print his own work, found himself in a similar position). Yet Brewer was adaptable. Few artists use both intalgio and relief methods of printing. More to the point, the only other British artists I can think who changed from intalgio to relief (and not the other way around) were John Dickson Batten and Leslie Moffat Ward. But Ward made his colour woodcuts in the twenties when things were going well and exhibited with the Graver-Printers. My own view is that a woodcut like Mont Blanc (top) and Lake Como (The pergola) (second from top) represented Brewer's way of moving away from the etching tradition towards work that appeared to be modern. John Platt wrote the introduction to his book Colour woodcuts in December, 1937. Platt was headmaster at Blackheath School of Art at the time and had stopped using the keyblock about 1934. The changes of tone he introduced were also similar to the ones that appeared in Brewer's work three or four years later and I would suggest Brewer knew Platt and his work and his book. He was by then the leading British colour woodcut artist, after all. 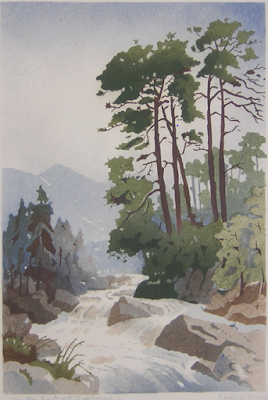 At Westminster School of Art (where he had studied before the first war) Brewer found himself surrounded by the leftovers of the Architectural Museum that had been housed in the building. Draughtsmanship is certainly to the fore, but it would be a mistake to underestimate Brewer. His sense of colour was acute and when it comes to his woodcuts, the reminders of artists as diverse as Oscar Droege, Francis Towne and John Sell Cotman are all to the good. For a change, there is an undoubted touch of Jean Harlow's Hollywood in Lake Como (The pergola). It is not just elegant froth, it's consummate froth. Most British colour woodcut artists would have avoided such pale tones to avoid any comparison with  watercolour. In this sense, Brewer was something of a one-off although his work does bear comparison with James Priddey. For me, the problem is Brewer could not get away from the generic lonely pine and lonely sail so beloved of Edwardian British art. 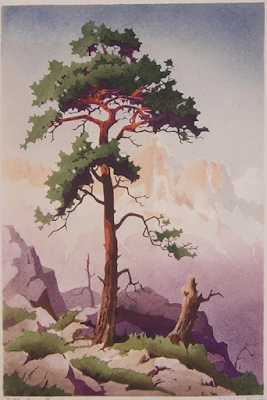 So far as the technique  he used goes, the general opinion is that Brewer used a water-based medium to print with, but did not print on japan. There was very little use of a keyblock. Too much black would have detracted from the gentle mood. This made the printing of a woodcut like Lake Como (The pergola) complicated. Generally, this only comes out when the prints are seen close to.  How he printed them is another matter. Personally, I would assume he used some kind of press.  It really is up to readers who own them to say what they think. I don't own one and have never seem one either.

The general impression given by The garden of the villa Carlotta (below) belies the subtlety of the arrangement, especially of the almond orchards in the foreground. Collectors of Brewer's etchings may well be bemused by his change of manner, but the fact that he could change and beat other British colour woodcut artists at their own game says a good deal about his standards of workmanship.  It may not always appeal, but Brewer's professionalism is just as impressive as the distant grandeur of his mountains. In 1938, John Platt advised would-be colour woodcut artists to study the work of great masters like Hokusai and Utamaro. It was to Brewer's credit that he didn't.

Finally, I  would not have written this post without Ben Dunham's research and encouragement and you will see the link to his excellent Brewer website on my blog list. 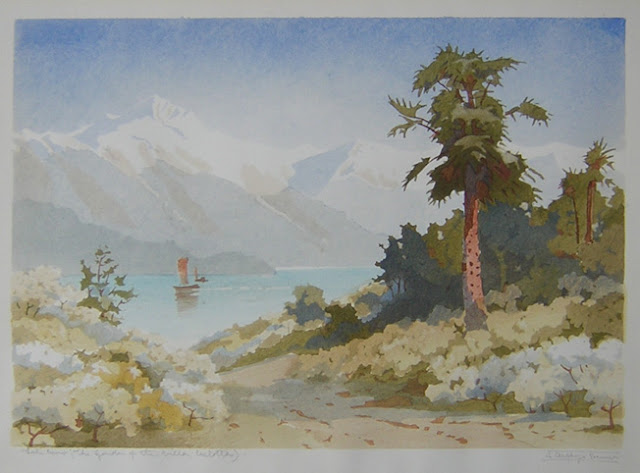