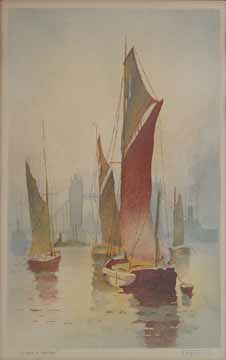 In the last post I wondered about the technique that James Alphege Brewer used when he came to make his colour woodcuts. Since then, Ben Dunham has sent me other images I hadn't seen plus a label that says Brewer's print Lake Thirlmere and Helvellyn was printed by hand by the artist. Fortunately, there are other details of the print on the website where it was sold. You can judge for  yourself, but the conclusion I have come to was one I didn't really expect to make. 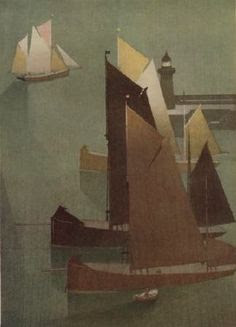 Another thing I suggested in the post was that Brewer knew the work of John Platt and possibly used his 1938 book to learn the technique. I also wonder whether Brewer may even have studied with him. Platt was working at Blackheath School of Art not that far from the subject of Brewer's impressive woodcut Pool of London (top). I don't want to detract from Brewer's achievement, but compare his print with Platt's Sails from 1933. Brewer's style and high colouring is more old-fashioned and similar to the kind of images of Newlyn and London Ethel Kirkpatrick was making in the 1890s. It still remains an accomplished piece of work and if you look at the two details below, from Lake Thirlmere and Helvellyn, you will begin to get an idea of how original Brewer could be when it came to making prints. It is very much like Allen Seaby's and also reminds me of  SG Boxsius' extemporised foliage in Autumn (the word Boxsius used himself). 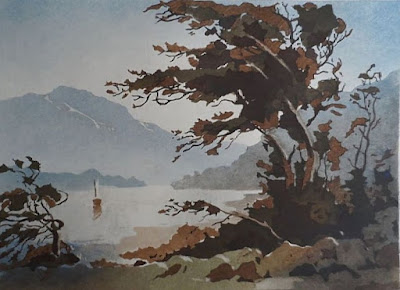 Not only that, you will notice that Brewer used Japanese technique in areas of  Lake Thirlmere - there is obvious application of the medium by hand, which is similar to bokashi. The details are expressive even if the overall effect of the print is conventional. But then compare the details of Lake Como (The pergola) (second from bottom) and you see him taking a different, more impressionist approach. You will notice obvious signs in both of application of the ink by hand. That strongly suggests Brewer was using a watercolour medium in common with the majority of British colour woodcut artists at the time rather than the printer's ink used by most of the colour linocut artists. I also think you can see the way the ink has run to the edge of the block. I like the camouflage effect he achieved here very much, something that suggests wartime as well Platt's brown and green on Sails. Even more original is the use of shape in Mont Blanc (bottom).  No other colour woodcut artist was working in this way but it is similar to does Platt's way of building up images from pieces of tissue  laid over each other- one that he taught to his students. 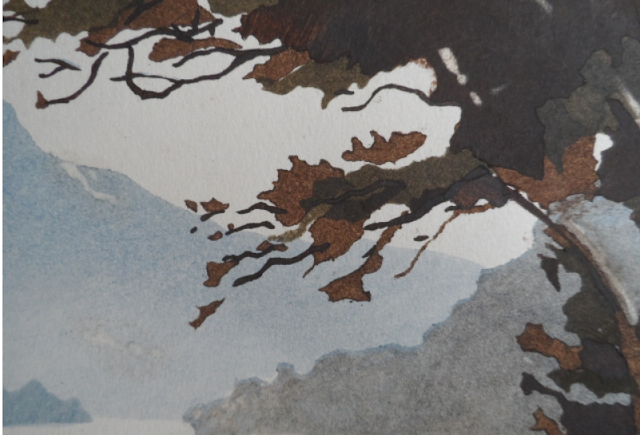 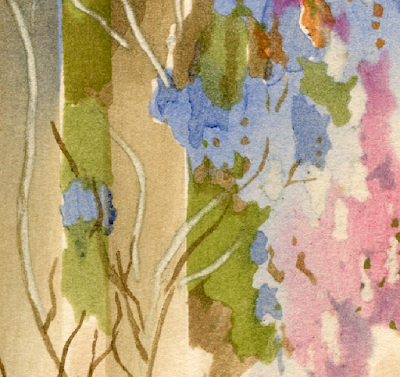 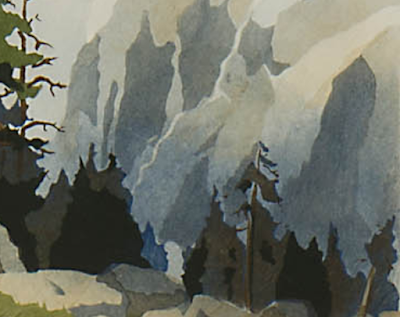