Return of the native: EA Verpilleux

Much as I love the Via Maqueda in Palermo, a seedy internet joint at the end towards the station wasn't the best place for me to do justice to Gerrie Casper's series of posts about Emile Antoine Verpilleux and related topics on The Linosaurus recently gerrie-thefriendlyghost.blogspot.com/. So now, I try to make amends.

Not very suprisingly, Gerrie promoted Verpilleux as Belgian, backing this up with his views on the Antwerp school of printmaking that centred around the two wood-engravers Edward Vermorcken and Edward Pellens. Verpilleux was of course born in London (as many Belgians are) and from there he was sent for part of his education to France and eventually to the Flemish city of Antwerp to study at the School of Fine Art there. (We have no dates but I think it's likely Vermorcken was in charge at the time.) And to underline his cosmopolitan background, he then married Caroline Putnam, an artist from Haden, Connecticut. I say all this to assert my own view, namely, that like Palermo, Verpilleux was a hybrid and like Palermo that is exactly what makes him interesting. He may not have been great but he was different. 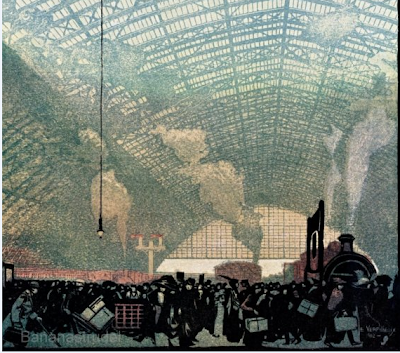 Basically, Vermorcken and Pellens belonged to a school of monochrome wood-engraving whereas Verpilleux was essentially a painter who used both engraving and woodcut techniques on large blocks to gain his well-known atmospheric effects. So far as I know there are no monchrome prints by Verpilleux extant and this probably means he never made any. He wasn't the small-scale kind of artist. Some of his blocks were engraved, others were cut. The tonal effect for his skies were achieved by using both. Unlike almost all his British contemporaries, he uses a heavy paper and printing ink that he must have learned to use in Antwerp and he could not afford to be purist. In fact, he needed all the flexibility he could muster and his wide variety of cuts, soaring perspectivist buildings and raw black crowds all helped make his prints distinctive. They had none of the deliciousness of Allen Seaby's surfaces, they were not intended to be pored over by connoiosseurs, they are not the kinds of print you want to look at very closely The very subjects remain the favourites of tourists to this day: St Paul's Cathedral (top) Tower Bridge, Trafalgar Square, the British Museum. We can now add the long forgotten St Pancras Station to the list (above). 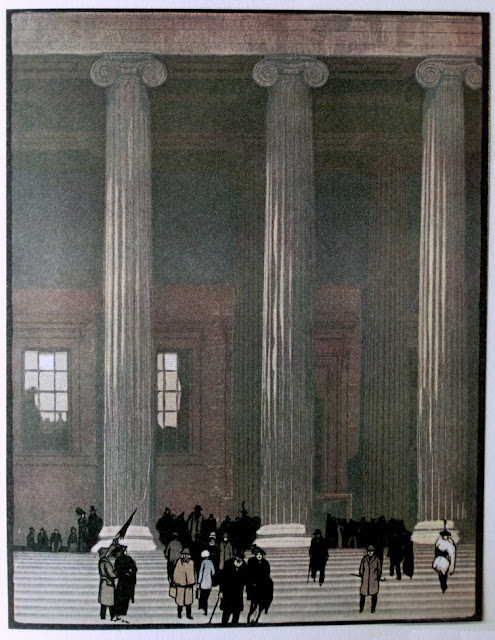 But look at his crowds, with their furs and large hats and shopping. They are much the same as the people LH Jungnickel showed in the Schonbrunner Park in Vienna at the same time. And this is what is most remarkable about Verpilleux: he had cast his net quite widely and around 1912 seemed to spring fully formed on the London art world. There is nothing hesitant or experimental about these early prints. They change; they become less painterly, but they are already well-judged composites. It even makes you wonder whether he met Jungnickel while he was at work in Brussels on the murals for the palais Stoclet (1905 - 1911), and whether they learned one from the other. But his crowds are gentrified Londoners, busy and blase, paying no attention to their aloof surrounding monuments, preoccupied with culture, travel, getting home, the shops. Occasionally, an umbrella is used to indicate some point of interest but the people rarely engage with their surroundings but in general they are too insouciant and elegant to bother.

This may be partly because Verpilleux was in the habit of superimposing a heavy keyblock, with its contingent crowds, vans, brollies and parcels, directly on top of the main subject, and unlike Jungnickel in his Schonbrunner print (if you image search LH Jungnickel on Google, you will find his design for the print, from this blog) avoiding any depth and development of space. Paradoxically, this makes him look more modern. It's only after you take a closer look that you pick out the Edwardian details. Which is a shame. He is too well-known for his effects and not well-known enough for his observation. And observant he was. For these are real Londoners, as chic as anyone in Laboureur. And it's easy to deride this use of the keyblock as hammy and habitual but he does vary things as you can see in the British Museum print and he is less prone to dependency on the busy keyblock later on. But then in his 1920s prints like Winter Evening (below) he adopts another mannerism. And this time it is light and colour, and light and colour often of the most sensational kind. 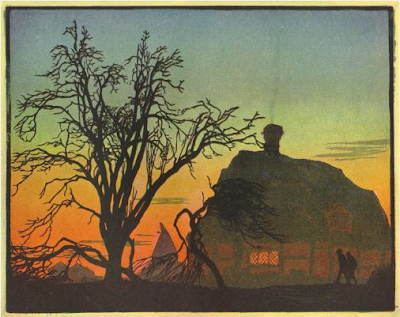 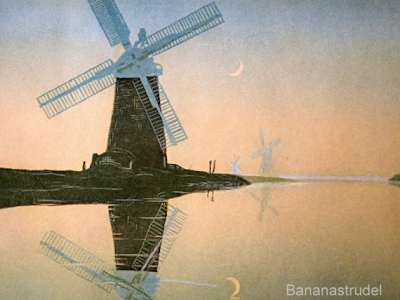