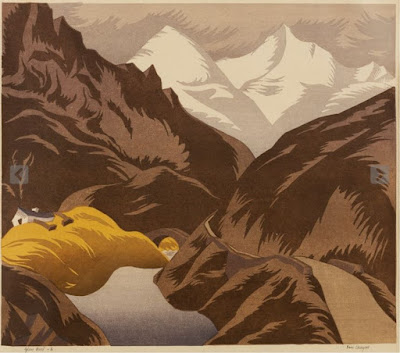 I owe a debt to the two readers who wrote to tell me about the forthcoming sale of modern prints at Mallam's in Oxford on Wednesday, 8th December. It is not only a matter of the sale including an artist who I like as much as many other readers do. The sale includes many prints by post-war British artists, including members of the the well-known group like Patrick Caulfield, Allen Jones and David Hockney who all studied at the Royal College of Art in the early 1960s. When I began this blog, none of us would have predicted that a teacher-graduate of the R.C.A. in the 1920s like S.G. Boxsius would find a place among  professional artists like Caulfield and Jones. But here is he is, with two woodcuts and a linocut, which attest to the central place the R.C.A. has had for post-graduate studies in Britain for many years now. 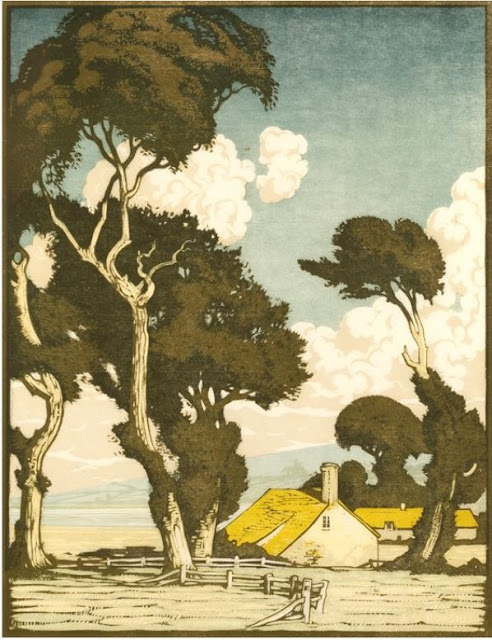 It is all about money. We all all know that if  Boxsius prices had not been going up, he would not be there alongside bankable artists like Ian Cheyne and John Hall Thorpe and the information they give about the prints is wrong. But starting with Cheyne (top) Loch Shiel is one of the later, more decorative prints he made in the thirties and went up for sale first in 1937. Like all his prints, Loch Shiel is exceptionally well-made and designed and as Cheynes don't come on the market that often, it should sell for a good price. Generally, I prefer the earlier ones but anything by him is worth having. 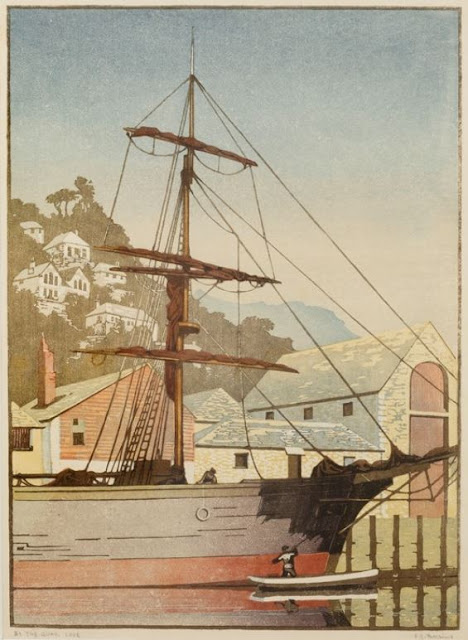 Mallam's in common with so many people before' have decided Boxsius' Autumn (second from the top) depicts summer. It is the less common one where the farmhouse has a yellow roof and like most of them is signed only in the block. The print was based on a drawing still owned by a member of the family but the trees have been made far bigger and the effect of the olive green against the sky in the top left corner is magnificent. Also notable is the faint view across the bay, a typical Boxsius piece of subtlety which is possibly at its best here. Made in 1930, there was also an edition though I have never come across an record of it being exhibited anywhere. Also included in the sale is By the quay, Looe, (above) given a first viewing online here only a few weeks ago and if their cataloguer read Modern Printmakers, he would not have made the obvious mistake of saying it was a woodcut. The majority of his prints were lino, though to be fair, it is never easy to say which is which. 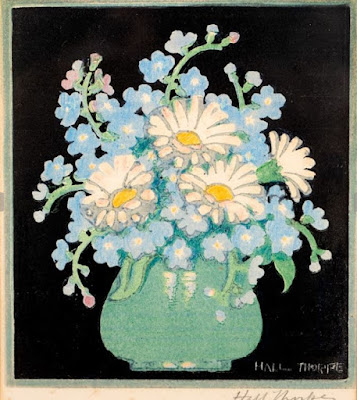 Also up for auction are a number of flower prints by John Hall Thorpe, including this one of forget-me-nots and daisies which I have never seem before. There is one early print called forget-me-nots where the main flower is, in fact, primulas, but that one is typical of his style while the one above is bolder and could be one of the woodcuts sold at his first London exhibitions in 1919. Unusually, the area outside the black background is printed in blue. I am not sure what is happening there and I can't think of any other example like it.