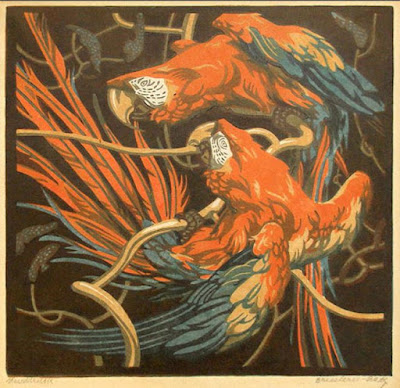 Over the years, the linocuts of Norbertine von Bresslern Roth have received scant attention on Modern Printmakers. There are various reasons for this, none of them very good ones, especially as her print of wolves walking down through a snowy forest (below) is one of the most memorable images I own. Even though she studied at the Vienna Academy of Fine Arts before the first war, she was essentially a designer and she had more in common with the modern artists and other designers who taught at the School of Arts and Crafts and, appropriately enough, she exhibited with the Vienna Secession in 1916 where so many of those same people had begun exhibiting before the war. 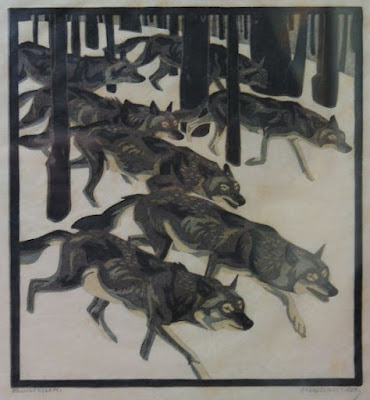 The colour linocuts she began making about 1920 owe almost all of their style to woodcut artists like Hans Frank, Walther Klemm and, most notably, to L.H. Jungnickel (who has featured widely and deservedly on my blog).  Jungnickel was responsible for the head of a snarling lion from 1903 and this set the tone for a lot of what Bresslern Roth did. Nor were the grouping of animals, which she is famous for, her own idea. Jungnickel not only led the way led the way to the Vienna Tiergarten, it was him who identified the parrots terrorising the sedate drawing-rooms of the city and made colour woodcuts of such vivid candour they have never been bettered. Bresslern Roth ignored humour and character but did give us very well-made prints that were clearly meant to attract attention on the same drawing room walls. This brings her well into line with what British artists were doing from about 1912 onwards. What she offered were professional prints from an identifiable series. William Nicholson and John Hall Thorpe had similar brands as did Gustave Bauman in the U.S. 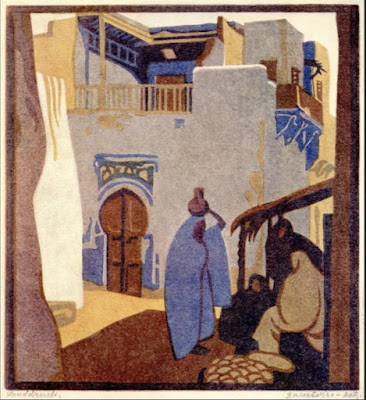 The importance of the formula to her becomes evident when she tried another genre, one problem being the genres were difficult to pin down. The best example are the prints she made after a visit to North Africa in 1928. How could it be that a country like Tunisia could turn out to be so bland? Perhaps she had only pretended to go  and went to a fancy dress party at the zoo instead. With their lurking camels, shaggy shelters and bundled women, they all remind me of banal versions of The Nativity (if you do want me to name the genre). An artist goes to North Africa for the blistering light and although it is apparent in the print above, you only need to consider what Henri Matisse did with Tangier to see how feeble Bresslern Roth could be once she was out of her comfort zone. Even Elizabeth Keith, a far less talented artist than Roth, rendered China and Korea with real character. With Roth you suspect a gaggle of Tunisians had one day wandered up the Hohe Warte in Vienna and squatted in the shade of one of  the villas designed by Josef Hoffman for his artist friends. Just look at the jazzy decoration in the background! Easy of course to mock, harder to get it right. And get it right, she quite often did. 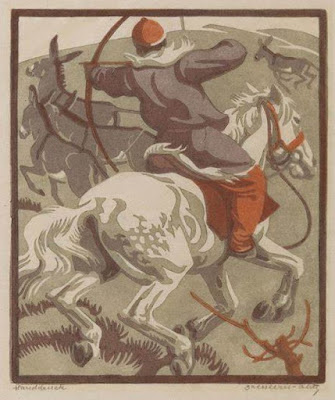