King of the wild frontier: the colour woodcuts of Gustave Baumann 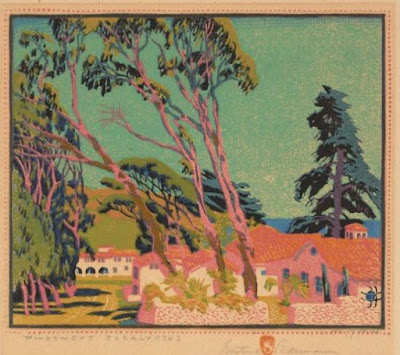 Gustave Baumann has an ambiguous place in the history of modern American printmaking for two reasons. Firstly, he arrived in Chicago from Germany at the age of ten but returned to train in Munich as an adult. Secondly his principal training in the US was as a commercial artist and in Munich he trained at the Kunstgewerbeschule, which is usually translated into English as the School of Arts and Crafts or as the School of Applied Arts and Baumann only gradually moved away from a folksy, commercial idiom to the classic American Arts & Crafts prints he made depicting New Mexico and California that is celebrated for. In this respect, he reminds me of the Australian artist, John Hall Thorpe, who left Sydney for London in 1899 and eventually achieved considerable success by making colour woodcuts on a semi-commercial basis without ever learning how to print. 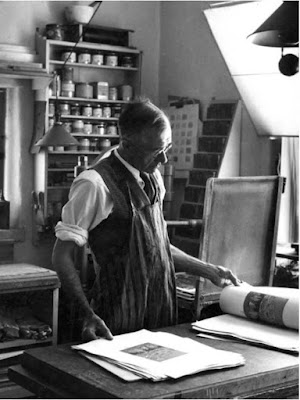 Hall Thorpe trained as an old-style wood-engraver on Sydney newspapers but never learned to print because all of that was done at the press. Baumann also worked as a commercial engraver in Chicago and took evening classes at the Art Institute before deciding to take further training in Munich in 1905. Training at the state schools was often conventional but Baumann was fortunate to study under Maximilian Dasio and Hans Neumann. Dasio had made an impact with a series of etchings, although the Fine Arts Museums of San Francisco say he was also experimenting with lino, something that strikes me as unlikely. We are on safer ground with Neumann who is best known for refined colour woodcuts that depend on areas of shadow or other solid colour rather than a conventional keyblock. Neumann was thirty-two and had only begun making woodcuts in 1903 after being encouraged by Otto Eckmann, but most were were lacking in dynamism and his best prints were not made until 1907 and afterwards. (See the Index for the relevant post about Neumann and Eckmann). 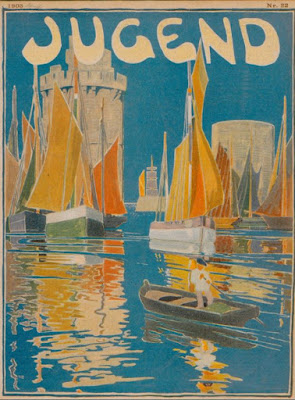 Neumann was by no means a master at that point but he was a contributor to the glorious Munich art periodical, Der Jugend, notable for its vivid promotion of the great themes of modern life - fashion, design and travel. (Vol. 22, 1903, above, shows the entrance to the old port at La Rochelle). On the broader front, in a theatrical gesture, Eckmann had sold all his paintings at auction in 1894 and devoted himself to applied art. Even Dasio gave up printmaking and began designing coins and medals as a member of the civil service. This was the radical applied arts environment Baumann found in Munich in 1905, but when he returned to the States a year later, he continued working in commercial advertising studios as if nothing had happened and when he produced images for a calendar in 1910, the style was conventional and the prints relied heavily on a key-block. 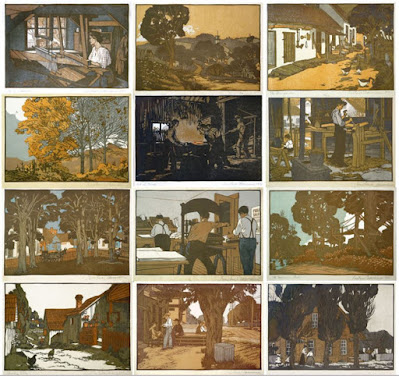 He spent the summer at the artists colony of Nashville in Brown County, Indiana. The woodcuts he began to make that year of Brown County were much less dependent on caricature and when he published a portfolio of twelve prints in 1912 he called In the hills o' Brown (above) modern Munich/modern Vienna wasn't all that far away and this made them obviously better so long as you liked your prints in shades of brown and orange with dominant shadows. The difference was Austrian and German artists would sometimes produce different editions, printing some by hand and sending others to be printed at a press. All the prints from In the hills 'o Brown were produced at the press of The Brown Democrat, a newspaper still in operation today. The impression I get is that Baumann was still not a professional artist but spent time working in Chicago until he left Nashville in 1917. 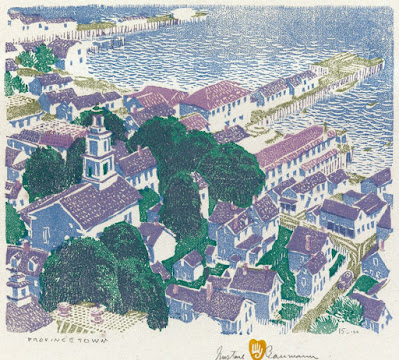 He visited various places that year, including Provincetown (above in 1917). After the outbreak of war in 1914, Ethel Mars and Maud Squire had left France, settled there and with Bror Nordfeldt and a small number of others founded Provincetown Printers. Edna Boies Hopkins (who had known the other two women when she was working in France) arrived from Cincinnati the following year. This meant many leading American colour woodcut artists were all in one place for the first time. Baumann then began to organise a touring exhibition of his work and went down to stay with Chicago friends in Taos in 1918 so that he could attend the opening of his show in the new state capital of Santa Fe. Offered studio space in the basement of the Museum of Fine Arts and a $500 loan to start him off, Baumann decided to stay. 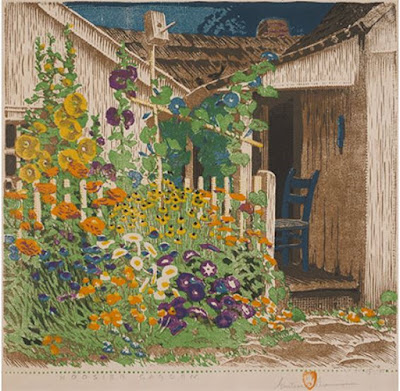 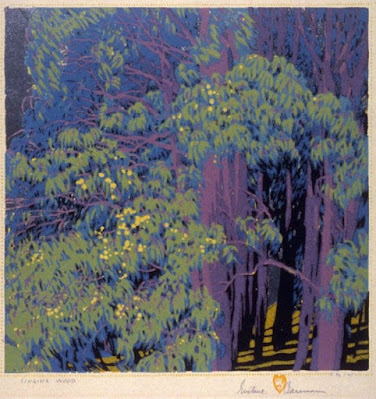 By then his style had begun to change and Nordfeldt arriving at Santa Fe in 1919 was probably beside the point. Having led himself up a blind alley with his development of a white-line technique, Nordfeldt had given up woodcut entirely. The sources for Baumann's change of style are not hard to find. Mars' curious mottled printing, Hopkins' glorious use of bright colour and Neumann's use of blocks of colour were all adapted in a way that was typical of commercial printmaking where style was one of the selling-points. But once he was in Santa Fe, it was the country and its people who set the tone and Baumann proceeded to make a long series of accomplished prints of the south-western landscape. Strong on atmosphere and stylishness, they are often short on detail in a way that Mars and Boies Hopkins never were. Mars, in particular, could be an attentive and witty observer of social manners and it was much the same with Hopkins. Her flower prints were always stylish but gave a real idea of the plants and their colour. By comparison, Baumann often lacked the details that gave a picture meaning and depended more on sumptuous colour and characterful buildings. 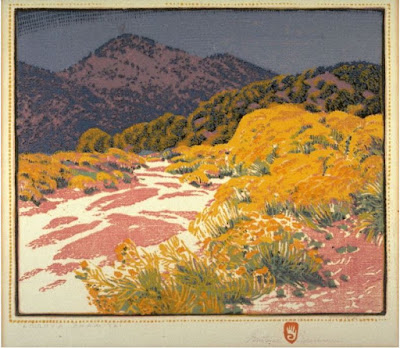 This meant American artists like Baumann didn't necessarily have it all their own way. Four years after Baumann's move to Santa Fe, John Platt swept the board in Los Angeles with The giant stride and, what was worse, in 1926 Baumann's Summer clouds was awarded the Storrow Prize for best block print only to have Arthur Rigden Read's colour woodcut Cite de Carcassonne receive the gold for best print in the show (as was only right). It was all very well praising the glories of art colony life in New Mexico, Read had tapped into the great American virtues of self-confidence, flair and showmanship to reach the top and, being a Londoner, he knew all about such things.