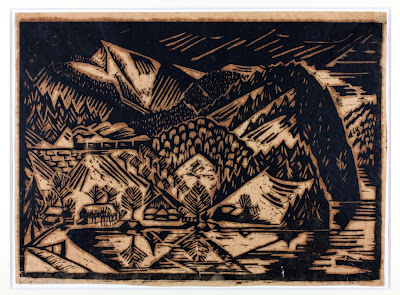 After more research on the highways & byways of the web, I am finally going to completely update on the Austrian printmaker Emma Schlangenhausen (1882 - 1947). This first image alone I think was worth the effort. As I suspected, she has turned out to be a varied printmaker, with a long and varied career. I am also going to delete the old posts to try and avoid any confusion. 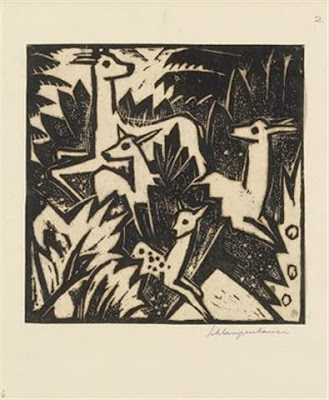 She was born at Hall in the Tirol and the first facts about her training relate to her time at the Kunstgewerbeschule in Vienna. She was there between 1900 and 1905, first studying under Alfred Roller (1864 - 1935) before he took up the position of designer at the Vienna Court Opera in 1903 where he was responsible for sets and costumes untill 1909. I say this because I think Roller's teaching helps to explain the stage-set atmosphere of a number of her prints. 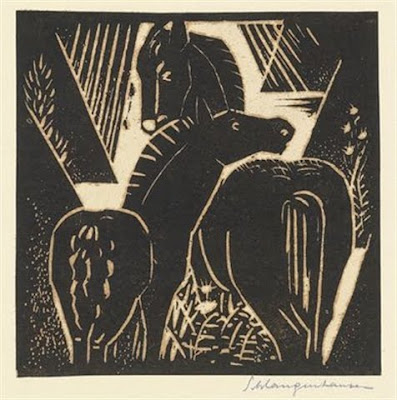 She then studied under Kolo Moser who was experimenting with monochrome woodcut as early as 1902. I assume it was the teaching of both men that led her towards woodcut but as you can see by the time she made these animal prints, she had left the Secessionist style well behind her and developped an approach that combines expressionism with art deco. 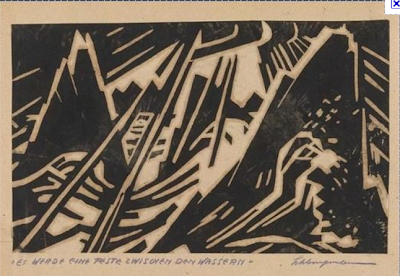 She then went on to teach in Vienna and exhibited at the Kunstschau in 1908. This puts her in the midst of the Secessionists. Even so, two years later, she and her student, Helene von Taussig (1879 - 1942), left for Paris. Looking at her later work, this certainly suggests a desire for wider training and experience - and perhaps also to escape the confines of Austria. Once in Paris she studied under the French Symbolist Maurice Denis at the Academie Ranson. Surprising this, and I have to assume she studied painting but I have yet to turn up any work I can reproduce. Both women left Paris on the outbreak of war and went to study in Switzerland with the painter and printmaker Cuno Amiet. (Von Taussig had already studied with him in 1910 before the move to Paris). 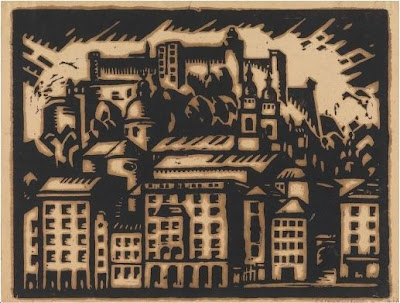 As for the prints themselves, this woodcut of Salzburg is a perfect example of the bold style she usually employed. Although I had originally thought these were bi-colour woodcuts, the sepia tones were in fact achieved by heavy inking. The paper around the printed area was unevenly stained to modify what might otherwise have seemed rather crude designs. 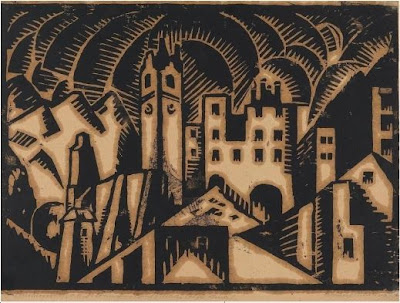 In this far more deco and stagey print you can see the uneveness of the seepage quite clearly. I think this work comes fromn the series she made of European cities that were published in 1920. I take it they were also exhibited at the Vienna Kunstschau in the same year. Her series 'The emotion' were also published around that time and show that she was still aware of the work of her old teacher. I've included a costume design of Roller's from 1919. I think it shows very well how Schlangenhausen both simplified and intensified Roller's idea. And is so doing, she made it look more modern. 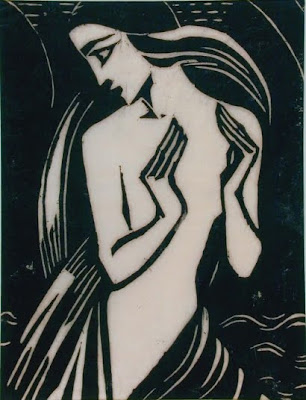 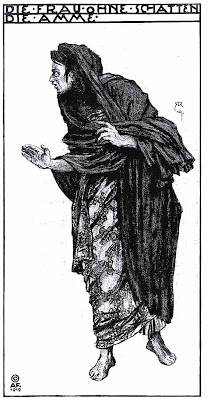 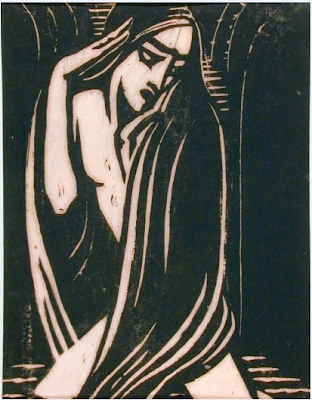 You will have noticed by now that many of her figure subjects are female. I have no doubt that she did see things from a feminist perspective but it is also worth adding that many of her male contemporaries from Klimt to Moser to Jungnickel produced work depicting women. They are given prominence in her harvesting scene where she notes the way women stacked sheaves alongside men - and also swigged from clay bottles. (Unfortunately, you can't see the seeping of the ink in this reproduction but it is there). 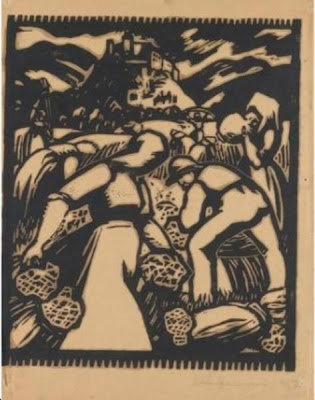 Another series she made after the war were these flower prints. There was also a series of Biblical images. The range of her imagery was considerable. What you don't see here is the other side to her work. The prints, being small and portable, have survived. The same can't be said of her paintings. 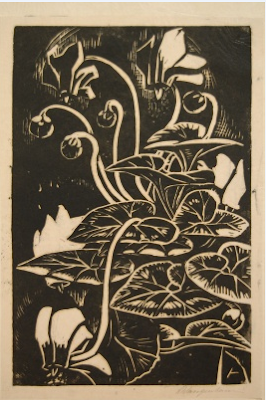 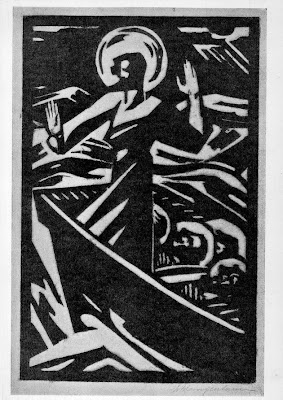 By the early thirties she was back in Salzburg working on a cycle of frescoes between 1932 and 1933 at the Franciscan monastery there. This does sound more like Maurice Denis but unless photos were taken soon after, we will never know. The buildings were used as headquarters by the Nazis after 1938 and the paintings were destroyed. Looking at the images here of flowers and figures and animals, it sounds like the sort of culmination that wide-ranging artists are in need of. 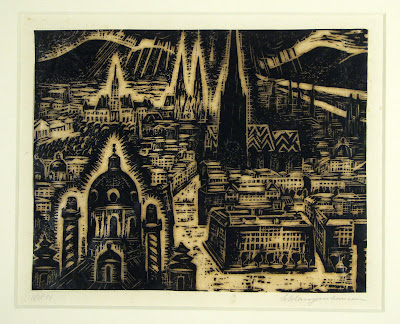 Hers were expressive cities not the analytical ones of Emma Bormann. A bullet-headed death presides over one of them. It is a remarkably coherent and attention-seeking poster for an exhibition by a printmaker of such poetic strength and subtlety. I have to add that having destroyed her frescoes, the Nazis were then responsible for the death of her friend Helene von Taussig in 1942. 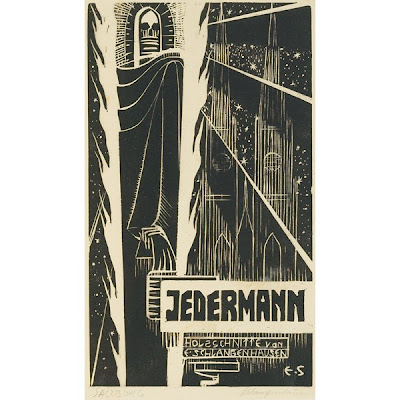