Colour woodcuts up for sale (and one you missed) 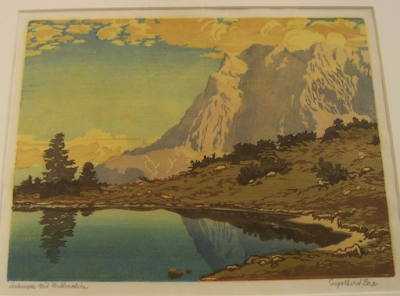 A reader commented a few days ago that he was lucky enough to buy four Kenneth Broad colour woodcuts and now has one of them for sale. I suppose between us Clive Christy and myself managed to raise the profile of Broad and I have also worked with his grandson to put together a check-list of his colour woodcuts. So, I do not want to sound proprietorial about Broad but, as my reader offered to send an image of 'Across the harbour, Whitby', I thought it was about time I posted it myself. 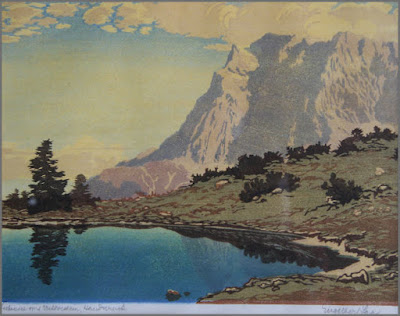 But, you will see I have begun this post with a print by the Austrian artist, Engelbert Lap, simply because it is one I am selling myself. Yes, I know, it's shocking but the renovation of my cottage in Wales calls for firm action. So, Engelbert must go. Nothing wrong with it. It's in wonderful condition and well-framed and comes up for sale at Mellors and Kirk, Nottingham, on 23rd and 24th November, 2016. The catalogue should be online of not now then soon. The image you see isn't mine but shows another impression that was sold not long back in the US. There is another version here for interest's sake. 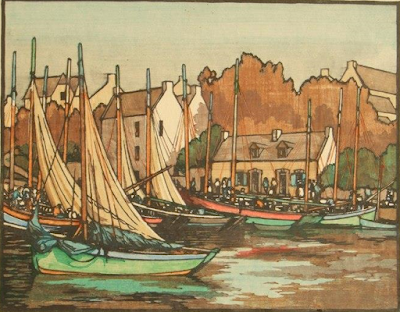 But much dearer to our hearts than Lap is Kenneth Broad and I was very lucky to pick up this unsigned impression of  'The harbour, Britainy' not so very long ago on ebay. No one else was interested presumably because no one had identified the print as by Broad. I only had the title to go by but I think it's Broad at his crowded best and will going on the wall in Wales once it has been framed (and the wall has been painted). It belongs to a later group of prints that includes, 'A Breton Fair' and 'The quay, Whitby' that were all exhibited at Colnaghi in London in 1932. More formal than his earlier prints, they find him making use of perspective in a manner no other British colour woodcut artist could. Trained as an architect and with an individual sense of colour, he may not have been much of a water-colourist, he could make literate and very satisfying prints. 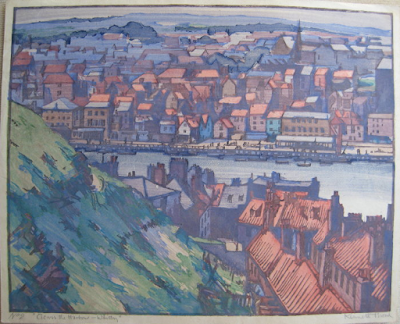 As you see, 'Across the harbour, Whitby' isn't half as good. I would date this to 1921 or 1922 and is similar in approach to 'Mitcham Fair'. He had found his own subjects but he was still not all that successful with the Japanese method he was using and that makes the prints look rather slapdash. By 1922, when he exhibited 'The fair, Southwold' at the Royal Academy, he was in control. That isn't to say, everything after that was good but by and large he had a fair number of successes. This is not the impression currently for sale; this one belongs to Broad's grandson but no doubt you will be able to contact the seller somewhere below (if he sees this new post, that is). 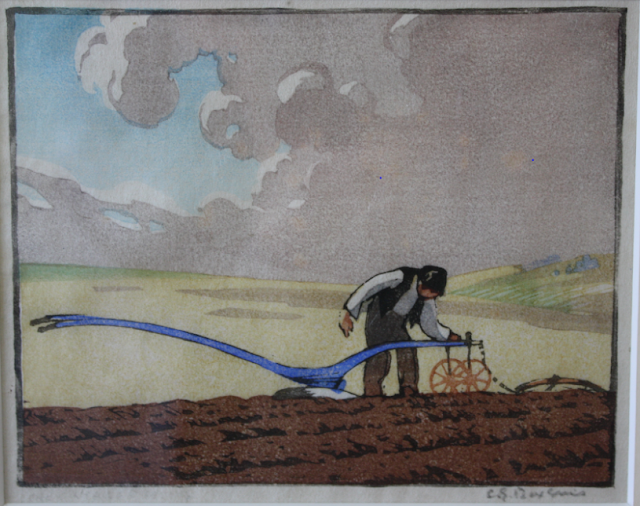 Last but far from least, is the work of another British artist dear to the heart of many readers. It is of course our own S.G. Boxsius. The only image of his ploughman generally available till now was so small, it was hard to make any judgment about the print. It presumably shows the South Downs in Sussex. There are a number of images of Sussex by him and I always believed it was an early work but looking at it now, I am pretty sure it's linocut, so who knows? I don't have a date or title. He was certainly making linocuts by 1925 but there are no firm dates for his prints until 1930. Notice how Boxsius the subtle colourist is already at work and, let's face it, anything by Boxsius is worth having if you have some cash to spare. This one belongs to long-time reader Klaus Voigt who can be contacted at klausvoigt64@yahoo.de. This one is the image for sale and it's the first time a good image of this particular print has appeared online so many thanks to Klaus for that.
Posted by Haji baba at 19:53 4 comments: